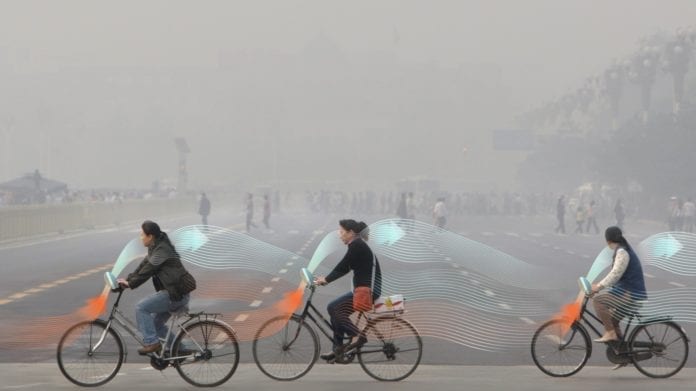 Here’s some more Dutch innovation news! Dutch innovator Daan Roosegaarde is working on the idea of creating air-cleaning bikes, to suck the smog out of the air in China. He’s been touring China, for this Smog Free Project, which aims to use innovation to address air pollution. The bike is currently at its first stage of creation – and it looks super cool.

It’s pretty self-explanatory but it literally does what it says: it’s a ‘smog-sucking’ bike. When you pedal, this bike will suck the dirty air, clean it and then push the fresh air back out. This way, the cyclist is not cycling in a cloud of dirty smog. This may then encourage people to avoid using their cars and cycle instead (take a leaf out of a Dutch man’s book). Understandably, no one wants to cycle in smog, so this should help encourage it (as of course driving is making the pollution much worse).

Of course the bike isn’t going to fix all the problems, but it’s one step in helping, and it’s innovative as hell. The idea has been around for a few years now, but it looks like it’s finally going to be a reality.

This is not the first time that this Dutchie has created something to tackle pollution. He’s also created a ‘smog tower’ – which sucks smog into the 7 meter tower, cleans it and then blows clean air back out, so then public spaces can have clean air to breathe. Also, the ‘smog ring’ – a limited edition ring made from compressed smog particles (via the smog tower). By sharing it, 1000 m3 of clean air is donated to the city. People even have this ring as their wedding rings, which is pretty original and cool.

What do you think of these super-cool bikes? Let us know in the comments!

And here’s why the Netherlands is also cycling straight into 2088:

Previous articleWhy we celebrate Europe Day and you should as well
Next articleJazz Festivals in the Netherlands: It’s Now Jazz Season!

Farming for the future: why the Netherlands is the second largest food exporter in the world

Thanks to decades of innovation and hard work, the Netherlands is the world’s second-largest agricultural exporter, after the U.S. With groundbreaking...