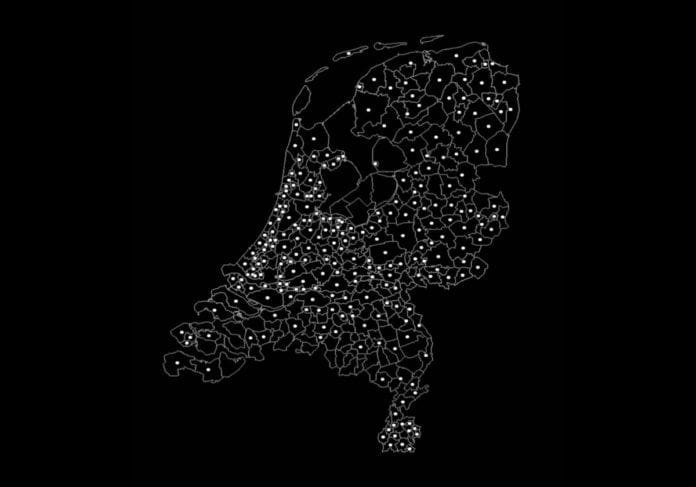 The Netherlands will be celebrating 75 years since the liberation of the country in 2020. To mark this very important time in history, Daan Roosegaarde, a Dutch artist and designer, will be lighting up the Netherlands early next year with his new project Levenslicht.

A circle of granite stones, coated with fluorescent ink and lit up with an ultraviolet light lamp, will be erected in all the places in the Netherlands from where people were sent to concentration and extermination camps in the Second World War. You can see a version at the Hollandsche Schouwburg in Amsterdam. It is from here that tens of thousands of Jewish people from Amsterdam were deported in 1942.

Daan Roosegaarde is a designer who is held in high regard for his creative use of light, ultraviolet lamps and glow-in-the-dark paint like his Van Gogh path in Neunen or the Waterlicht project in Afsluitdijk, Rotterdam and Amsterdam. He is even working on using space waste to build homes!

For the Levenslicht, the Volkskrant says that he was inspired by the Jewish tradition where they lay pebbles on graves or Holocaust monuments. He also says that the testimonies of Jewish victims transported by train really made an impact. He said, “in the wagon, light trickled in through a crack in the door. They saw that as a sign of hope.”

They are currently making 104,000 of these stones at their studio in Rotterdam. The Levenslicht will commemorate each of the 104,000 Jews, Sinti and Roma people who were deported from the country during the war.

Where will Roosegaarde’s Levenslicht be shown?

However, we cannot show you how the temporary monument of Levenslicht looks like as of yet because Studio Roosegaarde wants the big reveal of the whole monument to create a big impact. They have released a map of the Netherlands, marking all the locations where these interactive monuments will be set up.

There will be a huge monument erected in Rotterdam, a city that was bombed extensively during the war. It will have a diameter of over 20 meters and will be revealed on January 16. Versions of this monument will be sent to the places marked on their map, where it will be open to the public to view for two weeks. De Volkskrant says that 100 municipalities have already signed up to have this “active commemoration” to the victims showcased.

According to Gerdi Verbeet, chairman of the National Committee 4 and 5 May, every municipality can also “add their own activities and rituals”. So they can choose how to make this temporary monument that much more special by finding ways to commemorate the victims.

Will you be going to check out Roosegaarde’s Levenslicht monuments around the Netherlands? Let us know in the comments below!

Previous articleAnother weather record: 24 October was the warmest ever in the Netherlands
Next articleThe Ocean Cleanup introduces new plastic catcher for polluted rivers