Everything you need to know about edibles in Amsterdam in 2021

Welcome to our epic guide to edibles in Amsterdam in 2021 (and yes, we’re telling where you can get the best spacecake as well, no worries!)

You’ve arrived in Amsterdam and want the full-blown Dutch experience. So you put on clogs, buy a wheel of cheese, bike to the nearest canal, and hire a boat. Then, naturally, you set off on your trippy experience by smoking a thick joint and gazing at the unrivalled dutch architecture while bobbing along the water.

Buuuuutt, perhaps you want to be more inconspicuous and not do cliche activities that are akin to wearing a shirt that reads:

“I am a tourist in Amsterdam!”

Instead of blowing clouds of smoke as you chug along the canal, why not drop a trail of crumbs instead? Swap out that joint for an edible…an edible, you ask? What is an edible? How many edibles should I consume? Will I get too high? Never fear, we’ve got you.

Edibles are food items infused with cannabis. They are typically sweet items like brownies but almost any food item can be turned into an edible treat (weed biscuits, weed shakes and weed pasta).

You may be wondering why the weed needs to be put inside a food item. Can’t you just eat the weed plant? The answer is, no. The part of the marijuana that gets you high that’s used in edibles is called tetrahydrocannabinol (THC) and it needs heat to kickstart it. This is why if you just eat straight cannabis, you won’t feel its intoxicating effects.

What are the different strains you can get?

Weed is the dried cannabis plant, cultivated mainly from the flowering buds. Hash, on the other hand, is a paste made from resin and sap from the plant. Hash produces stronger effects because it possesses a higher concentration of THC than the dried plant.

There are two subspecies of cannabis. Indica-based weed will provide more of a body high and Sativa-based cannabis will produce more of a head high. You can also get hybrid cannabis and many shops will sell a blend.

THC versus CBD in edibles

There are thousands of possible cannabinoids that weed can contain but the most common cannabinoids are THC and CBD (cannabidiol). THC produces psychoactive effects whereas CBD does not produce a head high. It is, however, hailed as a miracle worker for pain relief, easing mental stress, and assisting sleep.

Why should you eat your way to a high?

Have you not heard? Smoking is bad for you. As well as not exercising, binge drinking, eating junk food, and.. well, the list goes on.

Smoking gives you instant gratification whereas you have to work up to the high with edibles. But once you are high, it typically lasts a lot longer.

Edibles are also a more discreet way to consume marijuana. If you’re heading to the movies and don’t want to stink of smoke, then eating an edible will do the trick. Or if you’re home and don’t want to spark complaints from neighbours, it’s a great alternative.

You can then share your experience eating edibles in Amsterdam on a late-night show too!

“I want those premium, top-of-the-line edibles in Amsterdam, DutchReview!”

So you’re in Amsterdam and you want your mom to experience some gourmet-style edibles. You’re looking for the kind that’s just as pretty as those paintings at the Rijksmuseum will look after you consume it. Then we suggest you make the trip to the Boerejongens coffeeshop, one of the best coffeeshops in Amsterdam. It’s a clean and decent shop that you can actually take your mom to!

Amsterdam Genetics and Boerejongens were awarded the best edible in Amsterdam last year in the Jack Herer competition. Jack Herer was an American politician and activist for the legalisation of cannabis. Although, he’s best-known for creating the Sativa-dominant weed strain, appropriately named, Jack Herer.

The Spacetry edibles made by Coffeeshop Amsterdam are also really spectacular. A crowd favourite is the red velvet cake. I mean, that cake is good just on its own so it’s taken to the next level as an edible. Want to know where to find it? Head to Boerejongens, CoffeeshopAmsterdam, Tweede Kamer, and het Ballonnetje coffeeshops.

Anyway, look at these pastries. The colour palette alone is already mind-blowing:

Or just look at this golden one, yummy!

But finding good and pretty weed pastries in Amsterdam isn’t that much of a challenge. We’re sure our readers will share their experiences in the comments (go on, people!). And otherwise check out this video on edibles in Amsterdam at coffeeshops:

Just like they will tell you at a decent coffeeshop such as Boerejongens, there are a few things you should know when you’re about to eat a spacecake in Amsterdam. So here goes:

How long does it take to get high from edibles?

It varies depending on your tolerance and experience, but the time from ingestion to feeling high can take anywhere between 30 minutes to two hours.

Edibles absorb differently in the body

Some people don’t notice a difference but others say they do. So even if you think you are a weed connoisseur, you might be caught off-guard by edibles.

The main aspect of edibles to be wary of is the delayed high. It’s much slower compared to smoking a joint or inhaling a bong. Just like when you eat any meal, the body takes a while to break down the food.

Once you eat the edible, it travels to your gut where it’s broken down and the food is converted into energy. The cannabis compounds are metabolised in the liver and then circulated throughout the body and brain. Given the edibles need to be absorbed through the digestive system, this creates a delayed onset in comparison to smoking where effects are felt almost instantly.

A lot of people eat half a brownie, expect it to kick it five minutes later and when it doesn’t, they smash the other half. Then 15 minutes later they are incredibly stoned and have a bad trip.

“What could go wrong with a bite or two?

Everything, as it turned out. Not at first. For an hour, I felt nothing. But then I felt a scary shudder go through my body and brain. I barely made it from the desk to the bed, where I lay curled up in a hallucinatory state for the next eight hours.”

So take it slow at first until you know your tolerance with edibles.

Why is the high more intense with edibles?

When you smoke weed, the THC enters the bloodstream more rapidly through the alveoli in the lungs. THC does not break down easily in blood. So instead, the THC binds with the endocannabinoid receptors in the body. This means the weed doesn’t metabolise in the stomach.

But when you eat the cannabis, the saliva starts to break down the THC, which is then absorbed more intensely by the stomach.

So that’s why, even though it can take up to triple the time to kick in, once it does, the high will last a lot longer and feel much stronger.

Each edible should dictate how many milligrams of weed is inside. As a rough starting point, 10mg is considered a single serving for an adult. But if you have never had an edible before, I’d definitely recommend starting smaller. Even if the packaging says to eat half of the brownie, you might need only a fraction of that for a comfortable high.

What to do if you overindulge?

Some people allege that sniffing black pepper can counteract the THC so if you are in dire need, you could try that. But keep in mind, this can be uncomfortable in and of itself. 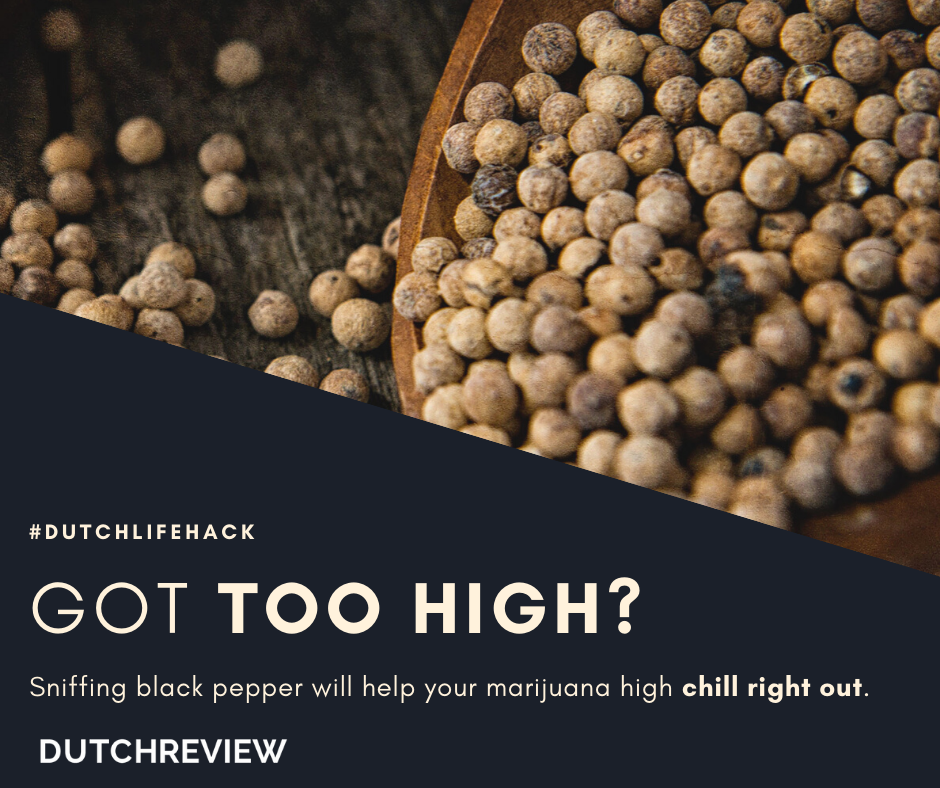 Go to bed and wait it out: time is the best cure. There’s not much you can do to reduce the high apart from just ride it out. Bear in mind that there is no such thing as overdosing on weed so don’t fret about that.

Want to make your own edibles? Here are the dos and don’ts

Although weed affects people differently, Sativa-based weed will give the users a head high and Indica-based weed is a body high that is better for relaxation and sleep. So consider this when picking the strain of weed for your edibles.

You’ll need to look up a recipe online (there are many of them out there) but here is a brief overview of the dos and don’ts:

If you’re interested to know more about drug culture then check out our article on truffles, CBD oil, hash, and our ultimate guide to smoking weed in Amsterdam. They’re packed full of handy tips and local insight that will enhance your weed-in-Amsterdam experience. You can also check out our guide for the 19 best coffeeshops in Amsterdam in 2020!

Be sure to comment below with your edible in Amsterdam experiences!

Editor’s note: This article was originally published in September 2019 and was fully updated in January 2021 for your reading pleasure.

Previous articleOur experience signing up for bunq Business
Next article11 Dutch songs to learn the language (and culture!)