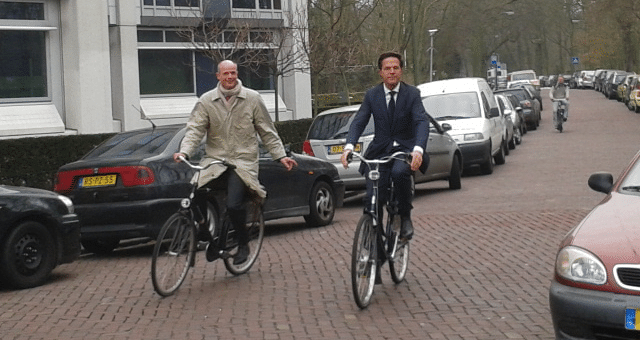 Dutch(wo)men and bicycles go together like Frenchies and wine, Finlanders and saunas, Scotsmen and soccer riots. Contrary to well-known stereotypes, we actually love our bikes more than we love cheese, tulips, prostitutes, or smoking weed for breakfast while laughing at old jokes about the average IQ in Belgium.
In fact, our Prime Minister loves to two-wheel himself to his office so much that the Internet took notice of that, as witnessed by a recent barrage of 9GAG posts about Mark Rutte doing his bike thing at the Dutch parliament.

But there is more to this story than just a politician trying to look “hip” and “every-day” to his underlings (I’m looking at you, Justin Trudeau!). More than just a tool to get you from A to B, the Dutch bike is also a weapon of diplomacy. Case in point: Mark Rutte offering a shiny new bike to his Indian counterpart Narendra Modi.
Is it silly? Sure. However, as for the question of whether or not it is effective, let me just ask you: when was the last time the Dutch and the Indians went to war with each other?

“I Demand a Trial by Bike!”

Did you know that Dutch politicians establish their dominance by challenging their colleagues to a bike-off? We’re not kidding: at the 2014 Nuclear Summit (which you’ll remember as the glorious event where Barack Obama pronounced the word gezellig to the world), the Dutch decided to leave their bikes at home. Why? Because here’s what happened last time they tried to have a fun-for-all biking trip:

At the 1997 EU summit, [the Dutch hosts] tried to persuade European leaders to go from the meeting hall to lunch on bicycles, with unhappy results that still make Dutch officials wince.

The German chancellor, Helmut Kohl, refused to go anywhere near a bike, shouting: “I am not a monkey!” The Finnish president, Martti Ahtisaari, who was almost as bulky, had to be supported in the saddle by aides. The newly elected Tony Blair turned the jaunt into a serious race, so he could demonstrate Britain was once more “leading in Europe”. His aides picked the best bike and made sure it was in good working order, allowing their man to sail pass Europe’s older leaders and dismount while they were still puffing away.

Read the link as proof that we’re not making this up. We may no longer have the strongest Navy in the world and colonies on every continent, but damn it, nobody bikes like we do!

Previous articleDutch Courage – Is Alcohol the answer to improving your Dutch?
Next articleKeen op Truckin’, For the Same Wage: Cheap EU Labour Killed Off.