I’m not kidding – Goat Yoga really is a thing! 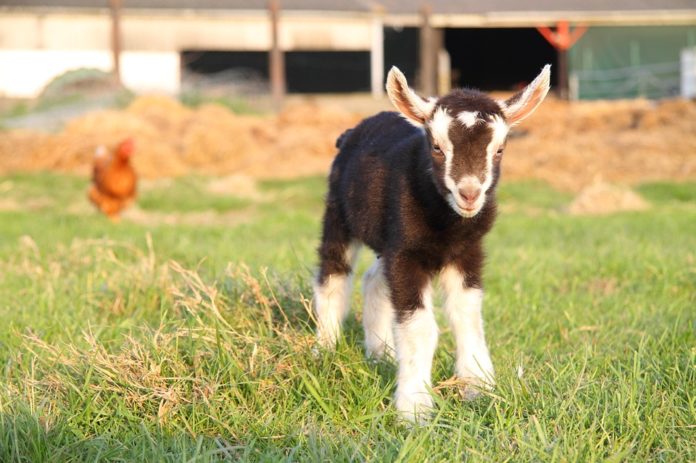 We are all into yoga now aren’t we? We take classes on a weekend and practice at home after stressful days behind a desk or the handlebars of our chariots. No? I didn’t think so either. In fact, I’m not sure if anyone genuinely frequents classes or if people just stand around in coffee shops wearing tight trousers talking about it. Undeniably yoga is the new craze that has gone from being only for hippies on a retreat up a mountain to millennials eating clean and actually enjoying kale smoothies. The fact is – what would sway you to practice those downward dogs and perfect that majestic eagle pose? The answer may be right under your crouching dragon or sphinx flex!

Ridammerhoeve Goat Farm in Amsterdamse Bos is offering yoga classes with goats, yes – goat yoga. Anyone with a cat or a dog who is even mildly affectionate will know that lying on the floor near them is never a good idea, you are the island on their lava floor, the comfy cushion that beats the laminate – you get the picture. It turns out that goats are equally as affectionate.

Do more of what makes you happy!

Nearly half in the Dutch population (according to CBS) indicate to suffer from at least one chronic disorder in the Netherlands. More common amongst older than younger people as would be expected.  Chronic disorders can be anything from high blood pressure to degenerative joint problems. Self help and self care are the strongest most talked about methods in terms of looking after the parts of your health that aren’t caused by unavoidable medical complaints and holistic therapies do have a proven record in being effective.

Does goat yoga make us happy?

Perhaps yoga is the answer. In 2016, 88 percent of Dutch adults saw themselves as happy. We all remember those visits to the farm as a child right? I was stress free and loving life petting a llama. If we aren’t practicing the ascetic discipline maybe we should be as nearly 40% of work related illness are stress related, yoga has been pegged as one of the best stress bursting treatments. We may still see the day that our bosses will start insisting on animal yoga. Who knows! You heard it here first!

This craze could take off. Students, young professional, midlife crisis folk, they say the benefits of yoga are astronomical put with that some cute four legged friends and that 88% happiness score could just sky rocket!

So you tell me, am I wrong and yoga really is the answer? Maybe if someone offered me a hour petting a little old Billy I might feel the benefits too!

Previous articleMestreechs Immersion: But what exactly is Mestreechs?
Next articleThere’s still plenty to do in Scheveningen in the fall!