Here we go! UK Election Preview and voters in the Netherlands 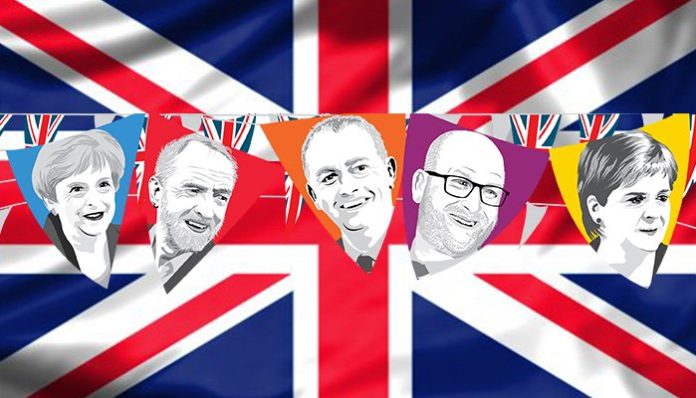 Tearing up the script

This election was supposed to be about leadership. It was framed by the Torys, and thus 90% of the mainstream media in the UK, as a presidential style contest. A simple choice between the unlikable, unpopular and ‘unelectable’ Jeremy Corbyn, and the “strong and stable” Teresa May.

It was supposed to be a cake walk for Teresa May’s centre-right Conservative Party, and thanks to their far-left leader, the biggest wipe out of the Labour Party since the 70s.

It was supposed to be about who the public trust to handle Brexit, and who they trust to reduce immigration.

It was supposed to be over before it started.

However, the story of this election so far has been one of tearing up the script titled “election narrative” on a daily basis.

The incredible resurgence of Corbyn’s labour party has dominated the discussions. The story went from, ‘maybe it won’t be a complete disaster’, to ‘maybe they’ll only lose a couple of seats’ to ‘wow, they might actually gain a couple of seats’, with some commenters now saying ’holy sh*t they could actually win this thing!’.

It’s a startling turnaround for a leader whose political obituary, when the election was announced on April 18th, was sitting on a pile marked ‘ready to be printed’.

One of the reasons for this can be seen in reports from the doorsteps of the UK suggesting that Brexit has not just become the elephant at the party nobody acknowledges—because it got drunk too fast and spent half the night crying and vomiting in the toilet—but it is now the elephant that ate all the cake and immediately went home, never to be heard of again.

In short, Brexit is just not an issue. People have decided en masse and without conferring, that it’s a done deal, that other things are more important now.

The ebb and flow of the election narrative has intermittently been affected by the terrorist attacks in Manchester and London, but this has only served to shift the focus even more onto domestic issues, police cuts and security being current buzz words.

Labour has also been helped by a disastrous Tory campaign, predicated on worn out slogans, fumbled U-turns, and a policy manifesto as hard to pin down as Teresa May when she hears the word ‘debate’.

Tim Farron’s Liberal Democrats have also done their part in aiding a Labour fightback. Support appears to be swinging away from the Lib Dems, as they fail to profit from their appeal to Remain voters. Gambling on marketing themselves as a one issue party with the aim of reversing Brexit, or at least forcing a second referendum on the deal, has spectacularly backfired for the Lib Dems due to the lack of interest in Brexit as an issue in this election

Along with other parties dropping the ball, one of the key factors to Corbyn’s resurgence in the polls is his huge approval rating with the young voters.

A cornerstone of Labour’s ‘bag of goodies’ manifesto is its pledge to scrap university tuition fees. The majority of young voters, cynical and disillusioned with politics, already favoured the anti-establishment Corbyn, and with this manifesto pledge he’s encouraged unprecedented numbers of youth and first-time voters to register.

Whether they will actually turn out on June 8th is still to be seen. Traditionally there is a large disparity between people who say they will vote, and those who actually do, especially amongst the youth.

Despite this, it increasingly appears that where Labour and Conservative support was once based on class, it’s now very much on generation.

Despite the general lack of interest in Brexit as a deciding factor, for Britons living abroad the result of this election could have huge significance on a process that will define their lives as British citizens in the EU.

Emi 22, lives in Groningen, “I hope to live and work in the EU in the future and I don’t want this to be more difficult, what happens if I want to return to the UK in future but have a partner from the EU? Will they be allowed to come with me?”.

As a student, Emi, who favours Labour, feels particularly strongly about education, “I think it’s so wrong that education is simply not possible for so many people: quite frankly, this is active oppression at work if certain groups of people are unable to become educated, to get better-paid jobs, and to succeed in life”.

Despite making the effort to send off a postal vote this 22-year-old student still feels a certain amount of disillusionment common in contemporary British politics, “To be honest, even living in the Netherlands, I feel so done with all the election coverage…when there are so many important other things happening in the world. If the party I don’t want to win, do win, I will be glad to not be around for the aftermath”.

Bala 27, also a UK citizen and resident of the Netherlands, echoes these sentiments in his decision not to vote, “I don’t believe there is any validity in offering any of my own time to self-involved politicians, who frankly offer nothing to a person in my position…I don’t feel it’s worth my investment in terms of free-time.”

Whatever the outcome of this snap election, Teresa May’s reputation has taken a battering and it seems certain the generational divide that defined the EU referendum will continue.

But for many Brits abroad, in the Netherlands and elsewhere, the general feeling is well summed up by disaffected non-voting Bala, “I haven’t lived in the UK for two and a half years now and I can say wholeheartedly, I miss nothing.”

Previous article
UK Election: What Next For British Expats in Netherlands?
Next article
Reach & Teach: a grassroots approach to integration in the Netherlands