A record of 1.1 million bikes was sold in the Netherlands last year. The popularity of electric bikes is skyrocketing.

It’s been a tough year for many businesses due to coronavirus. Thankfully not for the Dutch bike industry. There was a record turnover of €1.65 billion from bike sales in the Netherlands last year, reports RTL Nieuws.

E-bikes on the rise

Around 547,000 electric bikes were sold last year. This number is staggering, as ten years ago, e-bikes represented merely 15% of the industry’s sales. Now, electric bikes are responsible for 75% of the generated revenues.

There was also a high number of traditional bikes sold in 2020 — more than half a million!

The average price for a new electric bike was over 2,250 euros last year. The increasing popularity of e-bikes is also pushing up the prices of regular ones, with the average price being around 1500 euros in 2020.

It’s not really shocking that the Dutchies love their bikes. However, last year’s sales are still unexpectedly high.

With gyms being mostly closed over the past year and the government advising people to take public transport only when it’s necessary, cycling seems like a clear solution to our transport and exercise problems. If you add the good weather to the mix, it’s no surprise people are eager to get out of the house and hop on their bikes.

Bike sales were breaking records last year, but with the coronavirus crisis still raging on, the expected turnover for 2021 remains unpredictable.

Do you also enjoy cycling? Have you tried an electric bike? Let us know in the comments below! 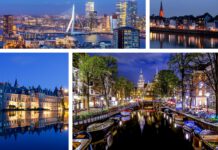 Netherlands calls in the troops to bolster booster shots and tests