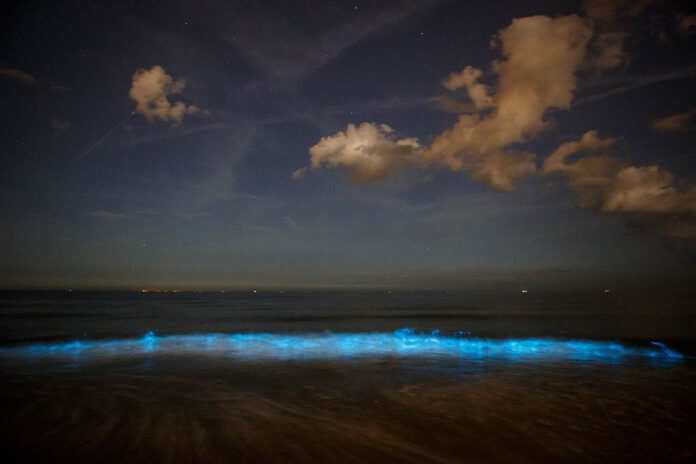 The warm weather combined with very little wind is a rare phenomenon in itself in the Netherlands. But now, nature has added some extra magic to our summer evenings — we’re talking about sea sparkle!

Sea sparkle, which can now be seen all along beaches in the southern part of the country, is a natural phenomenon that makes tiny single-celled organisms light up in beautiful blue colours at night. Sounds magical right? Well, a very specific science is behind it!

Under other meteorological circumstances, sea sparkle would sit at the bottom of the sea. However, warm weather makes the organisms multiply excessively and when the sea is calm, they float to the surface.

And then — magic happens! Once the weather conditions are right (as they have been in the Netherlands this past week), sea sparkle lights up at night when the waves move. ✨

This process is known as bioluminescence — a chemical reaction that, instead of converting energy into heat, turns it into light. In other words, when the waves move due to a nice summer breeze (or because you eagerly wave your hands around in the water to see the phenomenon), the sea lights up!

Aside from sea sparkle, some jellyfish, frogs, fish, insects, and mushrooms can also light up with bioluminescence. Cool hè?

Where can you see it?

The sea sparkle is expected to remain visible along almost the entirety of the Dutch coastline, provided that the weather stays the same. Currently, it is most visible in South Holland, reports Omroep West. People have already flocked to the beach to see this amazing natural phenomenon.

Have you already seen the sea sparkle? Any tips for where to best see it? Tell us in the comments below!

Previous articleSettle down in the brand new 7EVEN Amsterdam: your perfect home
Next article10 ways to travel around Amsterdam and the Netherlands (from your couch!)

Christine Stein Hededam 🇩🇰
A Dane with a special place in her heart for Minnesota, Christine is now falling in love with everything Dutch. Between finishing her bachelor’s degree, learning Dutch, and doing yoga teacher training, you will find her wandering about the Hague. Always up for visiting new places, she loves to explore the Netherlands with friends and takes pride in scoping out cute cafés (wherein to discuss books, big plans, and food).