India and the Netherlands in the Age of Rembrandt: exhibition at CSMVS in Mumbai 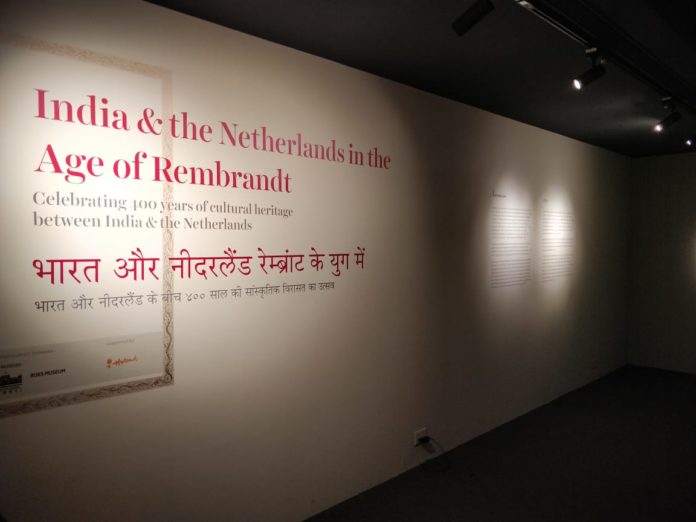 I have lived in India for most of my life, bar the last three and a half years. Of these, three years were all spent in Rotterdam, the Netherlands. Imagine my excitement when I found out that my recent visit to Mumbai coincided with a special exhibition called India and the Netherlands in the Age of Rembrandt being held at one of the main museums of the city.

The exhibition is held at Chhatrapati Shivaji Maharaj Vastu Sangrahalaya (CSMVS for short because it’s nearly impossible to say that in one breath) until December 16. It is jointly curated by both the CSMVS and the Rijksmuseum in Amsterdam. Having a total of 22 pieces (12 objects from the Rijksmuseum and 10 objects from CSMVS), this exhibition is “celebrating 400 years of cultural heritage between India and the Netherlands” as well as to commemorate the 350th death anniversary of Rembrandt van Rijn.

So how did these two countries influence each other and what the hell does Rembrandt have to do with India? I was wondering the same things, so I ventured into the museum’s special exhibits section on the first floor to satiate my curiosity.

Did Rembrandt ever visit India? Sadly, not. He never touched soil on the subcontinent but he did come into contact with Indian miniature paintings. They were a prominent form of art during the 17th century when the Mughals ruled most of India. During this time, it was also the Dutch “Golden Age”: the century during which art, culture, trade, and *ahem* slavery flourished in the Netherlands. It was during this time that the VOC set up trading posts in Coromandel, Gujarat, Bengal and the Malabar Coast. Nicolaas Witsen, a VOC administrator, collected these miniatures and his collection focussed on the Mughals.

But do remember that not everything during the Dutch Golden Age was well and happy. With the Netherlands being a former colonizing country, there has been much debate happening within the museum sector in the Netherlands about dropping the term altogether as it does not accurately reflect the reality of that time period. The Rijksmuseum famously chose to retain this when other museums like the Amsterdam museum chose to drop it from one of their collections so as to make their museums more inclusive. So definitely expect to see the phrase the Dutch Golden Age used during this exhibition as well.

Apart from Rembrandt being influenced by Indian miniatures, Indian painters like Kesu Das were also inspired by the Dutch prints that somehow made their way to the Indian subcontinent through the Christian missionaries. As a result, you can see a lot of Christian themes like “devotion of the virgin Mary and child” explored through their paintings.

Although this exhibition can be extensive, it does need you to have a bit of background knowledge on the VOC, and the realities of the Dutch Golden Age.

Where is the India-Netherlands exhibition in Mumbai: Chhatrapati Shivaji Maharaj Vastu Sangrahalaya

Have you perfected taking a deep breath before saying the name of the museum? Good! Now that you know the name, let me tell you about this interesting museum.

CSMVS is located a half an hour walk away from the Gateway of India (trust me, that’s a short distance in Mumbai) in the south of the city. The grandeur of the building will strike you immediately where you might recognize Mughal, Jain and Maratha architecture blending together beautifully.

A building that has been around since the early 20th century, it was initially named Prince of Wales Museum of Western India, after King George V. Indian cities, monuments, streets, and buildings have been named and renamed time after time since independence, reflecting the country’s political leaders’ agenda. In 1998, the museum was renamed after Shivaji Bhonsale I, a Hindu emperor of the Maratha kingdom.

Today, it is one of the main museums in the city and has over 1500 objects from different time periods. Be prepared to spend at least three hours (I spent four, but I am quite slow) in there! When you first enter the premises of the museum, you will see the beautiful lawns and gardens that surround the building. You can buy the tickets at the entrance and be on your merry way.

Psst, you can get some respite from the heat because it’s one of the few exhibition halls in the museum that is air-conditioned 😉

So who is actually in India? Are you going to visit this exhibition? Let us know in the comments below!

Previous articleBlustery, changeable week ahead for the Netherlands
Next articleThis video of a snowy Amsterdam is the best thing you will see today