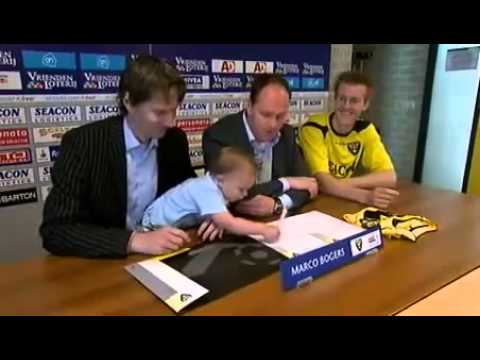 Then just over one year old, Baerke van der Meij was signed by Dutch football team VVV Venlo after his YouTube rise to fame. His father, Jorg van der Meij, uploaded an extremely cute video of Baerke kicking three balls in a row into his toy chest.

The signing was, of course, symbolic, but it is said that the legendary Baerke celebrated with a sippy-cup of orange juice after the deed was done.

Football runs in the Van der Meij bloodlines, it would seem. Baerke’s grandfather, Jan van der Meij, also played for VVV Venlo between 1958-60 and 1964-65. In the club’s undoubtedly rigorous selection process, that was important.

“One can speak of a right-footed player with a very good kick technique, perseverance and, importantly, football genes of grandfather Jan van der Meij,” a spokesperson for the club said at the time.

As Baerke is still too young to play professionally, the mystery of whether he has inherited his grandfather’s talent remains unsolved.