You can literally spot them a mile away because they’re usually extremely loud and freaking tall: Dutch people on vacation! But what really makes a Dutchie Dutch when holidaying abroad? Join me on a trip to a world full of stereotypes, Heineken drinking, and horrible GGGGGG sounds in this ultimate guide to recognizing to (or being) Dutch people on vacation.

* If you’re not into stereotypes, generalizations, and cheap shots then this might not be your article buddy

#1 Talking in loud Dutch about everything and anyone

The Dutch are not the masters of foreign languages that we are often made out to be (more on this in entry #5). When abroad, our philosophy is basically that the Dutch language is a superior language, and if for some reason people do not understand our guttural grunts, the solution is simply TO SPEAK. SLOWLY. AND. LOUDLY!

But even among themselves, the Dutch are notorious for having conversations loud enough to drown out the sound of a Boeing 747 at take-off. Though the Dutchies may think they are the center of attention for having just so much fun, they are in fact the center of attention because everything around them has been reduced to a burning pile of rubble by the sheer force of their decibels.

For those who have mastered the Dark Tongue of Baguette, here’s an excellent guide to this Dutch stereotype.

#2 Being tall as a basketball player (but without style)

What being sunburnt and drunk is to the British folk on vacation is being loud and tall as a basketball player for the Dutch folk. They’ve got some sunburns also, they’ve got the classic hideous three-quarter shorts on and both the male and female Dutchie are large and tall.

Ugly socks and sandals are optional, and having the ugly as hell checkered variant is very popular with the Dutch men. There is an upside to all of this, if you’re with Dutch people on vacation then it’s real easy to scout them out of all the other tourists.

#3 Complaining about Russians (and Germans) at the buffet

If there’s one thing Dutch people on vacation like it’s gratis and/or cheese. Put these two together in the form of a hotel-buffet and you’ve got a winning combination. So when the Dutchies flocked to a random Turkish beachtown (before it became the worlds most cynical dictatorship) all was good because nobody could touch them. The British were to busy queuing up and the Germans too apologetic. And then those Russians showed up!

Not only didn’t they give a flying **** about courtesy, they were also just hogging all the cheese – skipping the line and just guilty of having this Russian look. And let’s face it fellow Dutchies, we can’t stand these ‘new’ tourists the last 20 years. We all long back when we could just hate those Lothar Matthaeus look-a-likes to our East. 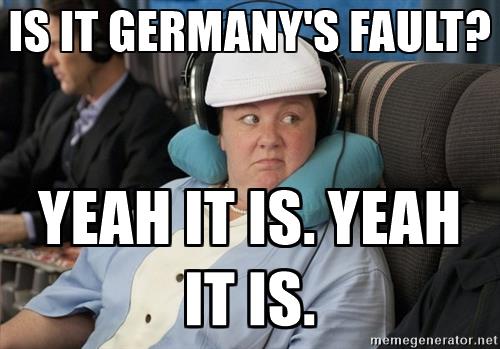 #4 Dutch people on vacation: Preaching the Holland-gospel to the natives

Hand to god, somewhere right now there is a Dutch guy in a random African country telling them all about the virtues of the proportional representation system instead of whatever backwards concoction they’ve got over there. Day and night the Dutch back in the Netherlands themselves are complaining about the government and the country that ‘dit is mijn Nederland niet meer’, but once abroad a decent Dutchman will get on the highest horse in town and start preaching about the extreme smartness of our pension systems and coffee shops.

And it’s not like they’ve just been waiting 7 hours in an Italian mail office or having a run with a Turkish police officer. No, anything can make the Dutchies start shooting off their mouth about perfect Holland  – only to immediately have them start cussing again when they land at Schiphol and see the grey, rainy polderland that is their home.

Forget about Frans Timmermans the hyperglot: when Dutchies are abroad, their English skills are somewhere between a New York taxi driver and a Tibetan monk who hasn’t left his solitary meditation cell for the last fifty years. Thus, in order to convey our Dutchness when forced to have small-talk with locals, we tend to yell names of famous football players, hoping that this will let them know just who they’re dealing with. “¡Sí, Holanda! ¡Johan Cruijff!” is what counts as a real conversation to a Dutch person.

We also never get tired of mentioning Ruud Gullit, Rijkaard and Marco Van Basten to Germans, but that may be because of entirely different reasons.

But what we lack in language skills, we more than make up with rudeness (or else we call it: hufterigheid). That’s why we’re always ready to expand the vocabulary of others with colorful phrases such as neuken in de keuken.

EDITOR’S NOTE: only use Google Translate on that last phrase at your own risk.

#6 Pindakaas and Hagelslag. Our horse and shield abroad.

If there is anything that should never cease to amaze a sane person about the Dutch, it is their ability to leave their country and then travel halfway around the globe only to complain about how everything there is not like their home country. To the Dutch mind, any culture that has not mastered the art of putting chocolate sprinkles on their bread is one that might as well be on the same level as Neanderthals. So for loads of Dutch people on vacation packing your own weird bread toppings is an absolute must for a proper vacation.

That’s it for now! There might be a part 2 on Dutch people on vacation where we can properly talk about having dinner in Italy at 5.30 in the frickin afternoon, complaining about the toilets or putting your towels out there by the pool in the early morning in order to deny other nationalities a place there.