We got it ‘gesaved’ – English words in the Dutch language

Living in the NetherlandsLearn Dutch
May 31, 2017 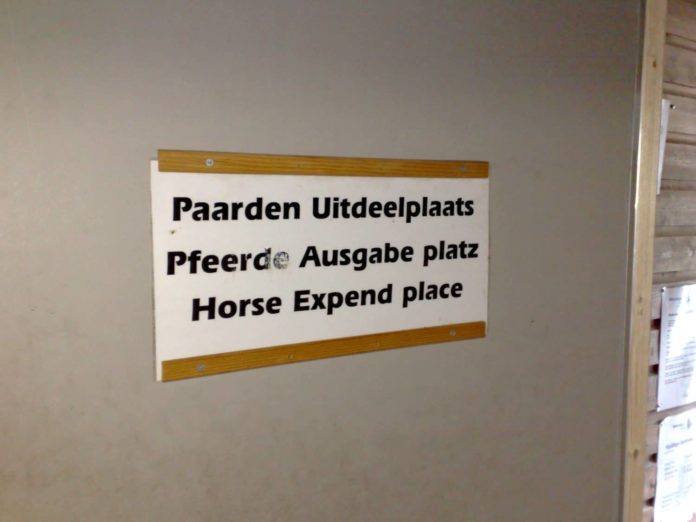 Ever thought that the beautiful Dutch language might become extinct one day due to the massive use of the English language? And that DutchReview’s vile anglophile profile might just be another nail in the coffin? No worries, new research has shown that Dutch is going nowhere – despite the fact that most of the Dutch people are awesome at English.

English no threat for Dutch

The research was conducted by a collaboration between the Meertens Institute for Dutch Language and Culture, researchers at Ghent University, and the Dutch promotional body Taalunie. Surveying some 7,500 participants in both Belgium and the Netherlands, the report concluded that Dutch is under no threat from English. Both native and new Dutch speakers also tend to even consider the Dutch language to be beautiful (who knew?)

However, while Dutch was not considered under threat in the daily use of the language, English is slowly pervading into professional fields such as research and transport. More and more Dutch people are also choosing to read their news in English, with 28 percent of the surveyed population stating they read news in languages other than Dutch.

And of course, almost all universities in the Netherlands are now English-speaking, to which some Dutchies might not agree with but for most of you readers out there is probably the reason why studying in the Netherlands is actually do-able.

Of the English words that seep into Dutch, though, there seems to be a ‘Dutchification’ process occurring. Words like saven, appen, and streamen have been altered to adhere to Dutch grammar and speech. It shouldn’t be surprsing, we Dutch have always liked to steal words from others. Hell, if you speak German, French, and English, you pretty much speak Dutch already. Even if we already have our own words for it, who cares? We’ll take the better sounding one.

Just listen to John Fealey explain it. 4:15-4:35 if you’re curious (although it’s definitely worth a full watch.)

The innovative Dutch: English words in the Dutch language

Let’s be fair, this process of lingual assimilation is really leading to the Dutch abusing English on a regular basis. But if we’re spinning words anyway, let’s just call it being innovative. That’s another thing the Dutch are famous for, after all. With that being said, let’s take a quick look at some of the brilliant ways the Dutch have decided to ‘improve’ on English.

English words in the Dutch language: all those IT-terms

Gestreamed, gesaved, appen, printen, downloaden, etc. Can you imagine translating these properly? Neither could the Dutch – the Belgians do however, which is hilarious in some cases. The funny thing is that some of these translations are already totally available in Dutch, think about it: gestroomd, gered, gedrukt…

Shit and fuck – Yes, we know that true Dutch cursing is much more creative, but sometimes you want to keep it simple. ‘Shit’ is used more by the Dutchies on average than the English speakers of the world if I would guess. Damnit and that word rhyming with “monstertrucker” (let’s keep it decent) are also widely used.

Luckily the nasty c-word has never caught on in Dutch. They’ve got their own k-word:

This one is slightly backwards, and we know the English have their own (often equivalent) saying, but where’s the fun in that? We all know ‘make that the cat wise’ but there’s also ‘nothing on the hand’  and ‘not a shine of chance’. Also reminds me of that time my dad told everyone in his office that they were going to ‘get two flies in one hit’.

Oh, and let’s not forget the Dutch literally translating English sentences such as ‘how late is it?’ or the famous ‘I fok horses’. 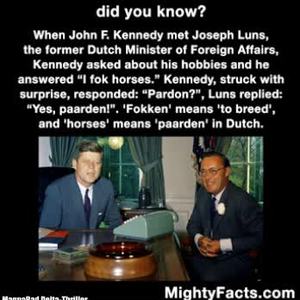 We could spend an entire article on this one alone, but I think it would be a better idee to keep it short and let the ‘champion’ of Dutch-English pronunciation do this one:

What other English words have pushed their way into the Dutch language? Let us know in the comments below!

Previous articleRising seas? The Alternate Causes and Employing the Dutch
Next articleNorth Sea wildlife to benefit from new Fisheries Accord