Best options for selling your stuff in the Netherlands

One man’s poison is another man’s meat. We don’t need Oscar Wilde to tell us that. The environmental-conscious and the genetically frugal Dutch people have filled this country with many options to turn your “spullen” (stuff) into some pocket money.

It’s also a good conscience for having helped to recycle still usable items laying about at your home. Here is the list of places where you can unload your stuff in descending order of effort required. (5 being maximum and most difficult while 1 being the easiest, simplest.)

Selling your stuff in the Netherlands on Marktplaats –

There are myriads of online marketplaces where you can post your items and sell them for a fee. For the newbies to the country or online marketplaces, Marktplaats.nl is the place to go for everything from your used Opel to your wedding gown.

My Dutch friends have excellent experience with it. However, I have to say as an English speaker, it can be difficult to use. English descriptions will almost get you zero interest for your items unless you are giving away stuff for free.

Also, Dutch customers are hard bargainers. They do not even start their bids for your item at fifty cents, they start by asking you to throw in a free HD flat-screen TV and deliver everything to their place to compensate for their inconvenience caused by the purchase of a pair of old branded underwear (an example of what people really sell on the platform) from you.

That’s the kind of people that are bidding on Marktplaats. How to close a deal successfully? I would say you need to possess some tenacity in just simply not giving in to their slash-throat approach.

Effort level for selling stuff on Marktplaats.nl is also quite high just simply based on the fact that you have to post your stuff one by one and discuss with potential customers, respond to bidders and arrange shipment or time and place of transactions.

While not limited to Marktplaats but all online marketplaces, it’s worth noting that the whole process can be quite time-consuming. It may take a couple of reposts before your items are discovered and subsequently successfully sold on Marktplaats. It’s frustrating so be warned!

There are two things that Dutch people like, all-you-can-eat buffets and yard sales. Since there are so many people interested in re-entering their stuff into the economic cycle, yard sales became hundreds of flea markets, run by organizations that go “on tour” with their brands of flea markets.

If you do a search online with the search term “vlooienmarkt” plus the name of the city you live in, you are bound to find a flea market near you in the near future. For your convenience, you may visit this brilliant website. There could be as many as twenty flea-markets running on the same day around the country on a good day.

Why a flea market?

The idea of selling stuff on a flea market may repulse some people whose thought of flea market reminds them of fleas and any number of unpleasant things and odours. But so many regular Dutch people are doing it, such as women renting stalls with their best girlfriends to sell their clothes from last seasons. Parents also are selling their growing kids’ relatively new used clothes. Grandmas and granddads do this as past-times.

For example, there is virtually no negative social stigma in the Netherlands on peddling old stuff on the streets. (Or in the park or in a hall, locations differ depending on seasons.) The fact that there are so many flea markets around means you can unload your stuff all-year-around. This is without having to wait for King’s Day of course. (See next item on the list).

The catch is the markets are so popular you will need to book as soon as the organizers open spots. Setting a calendar notification for registration date may be required in order for you to get a (decent) spot.

Needless to say, there is also a small cost associated with renting a “kraam“. Setting up according to the rules of the organizers, having to open shop the whole time period they stipulate and cleaning up can also be a hassle. But out of all options, selling stuff on the flea market has been the most fun way of getting rid of old stuff I ever had.

Selling your stuff In The Netherlands: sell them on Facebook

Go on Facebook, join one of those buy-sell groups and post about your items…sounds easy enough. Many of us have experience doing that. From casual observations, two groups of people are especially interested in reading posts about a bargain, and they are students and expats. Both live in temporary living circumstances and suffer a constant need for stuff they would otherwise have access to when they could no longer just scream “Mom, help!” anymore and have their problems fixed just like that.

Participants in these groups are eager readers even when they do not necessarily respond. Facebook notification system made sure they will not miss a message from you. One downside with selling stuff on Facebook is many of these groups are public, making all your personal activities all out in the open. This includes your attempt to get rid of the candle stand you received from your friend last Christmas to her annoyance. The upside is you can buy almost everything on it… 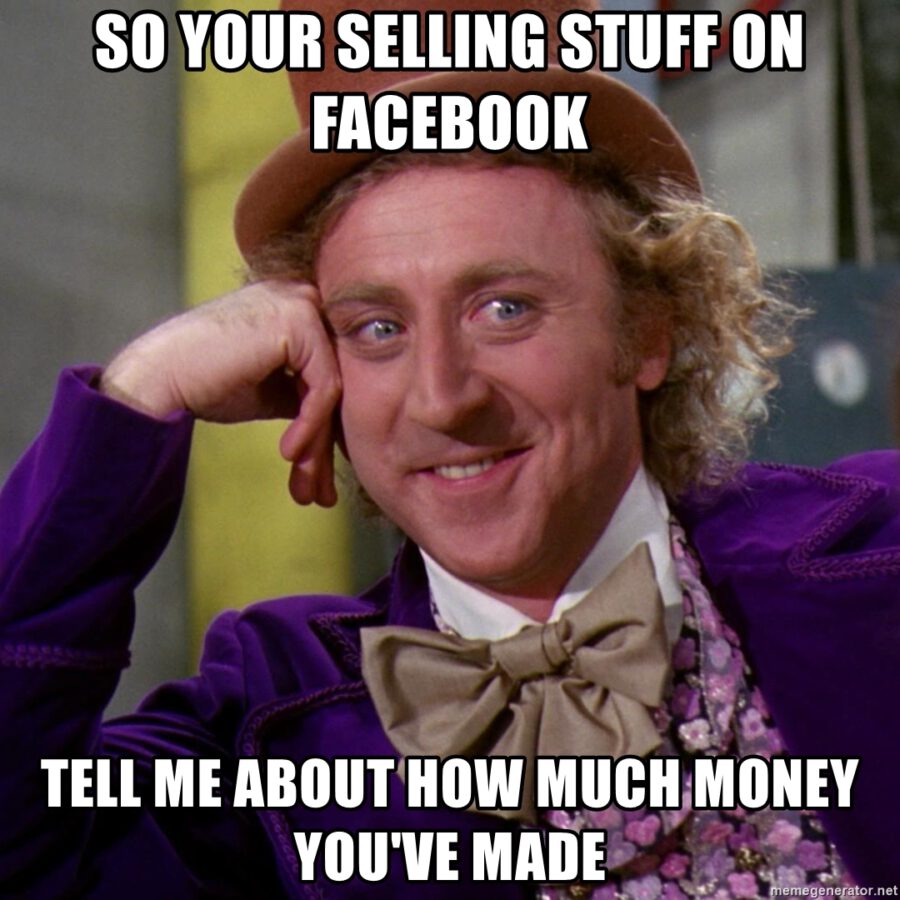 King’s Day market is perhaps one of the coolest markets you will ever witness in your life. The whole Netherlands practically turns into an open marketplace on this day. The Dutch call it the “vrijmarkt” (free market). In some places, adults could be seen to mark the prime spots with chalk. Kids could be seen out camping with their stuff to get spots.

While there are always die-hard enthusiasts for everything, for regular sellers like you and I who likely just want to get rid of a small quantity of stuff without spending too much effort, it should still be fine to get to the market between nine to 10 AM in the morning.

This is especially so when you live in the city where there are ample spaces in the various squares/parks. There should be no lacking space for even the late-risers who partied past midnight drinking lots of cheap beers dancing to cheesy Dutch music with patriotic drunks dressed in complete orange. This is true only, of course, when the weather is good and it is not raining. On rainy days (364 days of the year), you may want to be there early. Just to pick a good spot that is covered. 😉 For example, by awnings on the sides of buildings.

The thing with selling stuff on King’s Day is that the chance of you getting a good price for your stuff is relatively low, because practically everyone is out here, and your customers are just going to walk away if the price is not right and look for something else.

Also, the chance of items being ruined by the rain or dirty mud kicked up from the road by crowds of people passing by is quite high. Therefore go prepared, either mentally or physically (bring a transparent plastic sheet to cover your goods or put them on a table — but be prepared to scram quickly when the police tells you to if you have set up in the wrong place.)

Selling your stuff in the Netherlands: give them away on “Sinterklaas” (St. Nicolas)

If your stuff is relatively new, you can, in fact, repackage them under nice-looking fifty-cent gift-wrapping papers from HEMA and give them to your relatives and friends participating in the Sinterklaas “pakjesavond” (presents evening).

The key to getting rid of them without getting yourself in trouble is the ability to write a beautiful poem that rhymes explaining why you think your friends or relatives deserve (or need) the presents as convincingly as possible. On this night, people can exchange tens if not hundreds of small, trivial gifts with each other. (Anywhere from a comb to a pack of batteries.) They would not notice one or two items you have thrown in the pile that you have previously rightfully owned. Just make sure those are not the same things they gave to you the year before!

Your only problem now is what to do with all the new money, possibly check out our ultimate guide to smoking weed in 2020 and get back to us. As my grandma used to say, “don’t spend it all in one place”.

We hope this guide about selling your stuff in the Netherlands helped you guys out. Be sure to let us know what you think in the comments.

Previous articleThe Kröller-Müller Museum: A day of great nature and Van Gogh
Next articleCandidate Eelco Keij and the International Vote: a closer look

Loving the busy city scene that comes with living in The Hague but looking for a wander in the great...
Read more