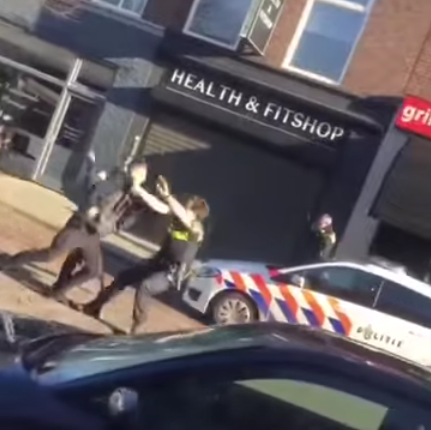 3 police officers in Waalwijk in the Netherlands were injured yesterday whilst trying to arrest a 30-year-old man. A video began circulating the internet of the man thrashing at officers aggressively and trying to put a broom through a car window. Yup, I was watching through my hands.

Here it is if you missed it:

After a struggle for a few long minutes, lots of pepper spray, baton hits and warning gunfire later, the man was finally arrested. One of the officers was later taken to hospital with ankle injuries, which is no surprise when he was flooring officers and hitting them. The other officers only sustained minor injuries which did not warrant a visit to the hospital.

I’m not sure if the guy was on drink or drugs, but I imagine it’s at least one of them.

Previous articleThe snow is arriving in the Netherlands and public transport will be affected!
Next articleYou want to see this! Those fine Snowy Pictures of Today’s Winter Wonderland

The RIVM has released its weekly coronavirus figures from October 12 to October 19. The number of hospitalisations and ICU...

The RIVM has released its weekly coronavirus figures from October 12 to October 19. The number of hospitalisations and ICU admissions have increased sharply,...

It’s on: Dutch railway in a battle against graffiti sprayers

Annually, the NS spends about €10 million removing graffiti from trains. As a result, the organisation has announced new measures to combat graffiti vandalism. With...
Current Month