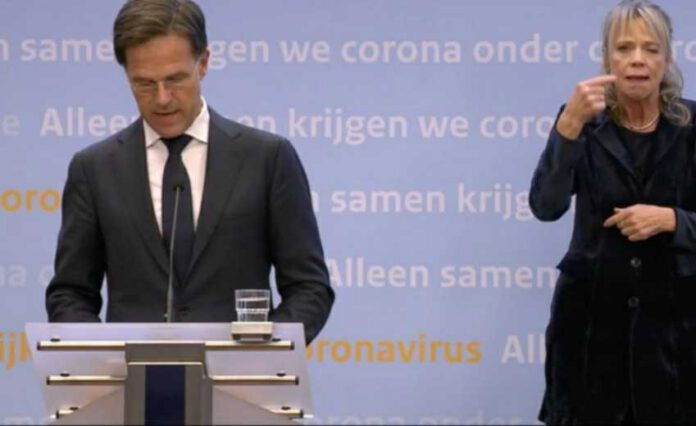 Unlike last week’s press conference, which saw no new coronavirus measures, this week’s conference has brought with it some additional restrictions. The restrictions are set to begin tomorrow night at 10 PM and will be nationwide.

Prime Minister Rutte has said that while the coronavirus numbers are going down, they need to be decreasing at a faster rate. For this reason, the cabinet will be introducing stricter measures.

“We need to stand by the people who work in the hospitals and make sure people on waiting lists for other problems can get treatment. We need to bring down movement, have less contact, and fewer people together.” Rutte says that only once the Netherlands has accomplished this, can the country move on to the next phase.

In addition to this, regions may implement additional measures. This may include, for example, a curfew or the closure of high schools.

The decision to impose these new measures has been highly debated. While Prime Minister Rutte, Health Minister De Jonge, and Public Health Minster Van Arkel proposed a two-week closure of the country, other officials were in opposition.

Minsters Hoekstra, Grapperhaus and Ollongren say the measures are going too far. These new measures are in addition to current measures, which are expected to last through December.

However, Rutte has said the Netherlands needs these new measures, and it needs them sooner rather than later. “There’s no other option. We have to do something about this second wave. The faster we go, the better it will be.”

“Don’t be surprised if we are strict.”

Rutte has warned that those who break the restrictions will be disciplined. Fines will be handed out more often.

“In the end, most of the people are following the rules — so a small group of people cannot spoil it for everyone else,” says Rutte.

Health Minister Hugo De Jonge has said that while coronavirus numbers are beginning to slow down and decrease, they are not doing so fast enough for the healthcare system. This is why he is also in favour of the new two-week restrictions.

“The amount of infections is lowering but we still have to take extra measures for the next two weeks on top of the intelligent lockdown that we already have. People ask why — if you look at the numbers we have, it’s not as low as it seems.”

Hospitals continue to struggle and De Jonge describes today’s weekly figures as “way too many.”

During the first wave, patients were entering and leaving the hospital at a fast rate. In the second wave of coronavirus, people are staying in the hospital for longer, De Jonge says. This has led to even more pressure this time round on healthcare staff.

“That means in the end that more people are in the hospital in the second wave than the first wave.”

De Jonge took a moment to highlight the continuing worry for nursing homes as well. He says that one in four nursing homes have now been hit hard by coronavirus. This further increases pressure on healthcare workers as more workers must take time off if they catch the virus.

He also thanked healthcare workers for their hard work in a trying year “We are so thankful to all the people in healthcare that we can count on them again.”

Will there be a Christmas?

De Jonge has said “Christmas will be different this year for sure.” However, with the strict implementation of these new measures for two weeks, the hope is that people will be able to celebrate Christmas with some of their family.

“Everyone wants a life with as few restrictions as possible, but that’s only possible if we get infections down. Therefore, we take these stronger measures and we have to do them for the next two weeks.”

Ultimately however, it is not known for certain whether or not Christmas will be a success this year, only time will tell.

While some ministers may see these new restrictions as going too far, there is no denying their positive impact. The current restrictions have led to some hope for the Netherlands as the number of daily infections is slowly beginning to drop.

For example, this week saw 64,087 new coronavirus cases. This is an undeniably high number but nonetheless it is lower than last weeks figure of 67,542. The number of patients in the hospitals however, continues to climb.

The Netherlands still has a long way to go in its fight against coronavirus, but these figures indicate that the current restrictions are taking effect. With the continued imposition of coronavirus measures, this may be the beginning of the end of the second wave.