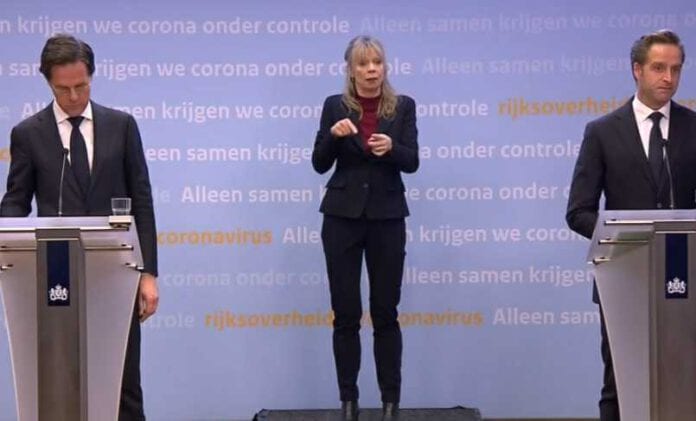 The past few days have seen the Dutch government lean towards an easing of the current coronavirus restrictions — however, some experts worry this is all happening too quickly. We know for certain that primary schools and childcare will reopen on February 8. Rutte and De Jonge have now addressed the further easing of restrictions in a traditional Tuesday press conference on February 2.

Yesterday, we also heard that the cabinet was considering reopening shops and restaurants for pick-up orders as soon as next week. However, today, it was revealed that 2/3 of the latest coronavirus infections can be attributed to the British variant of the virus.

During the last press conference, the British variant was the star of the show, with Rutte impressing the danger of the new mutation and arguing that a strict lockdown was needed as a result.

Now, with the variant continuing to spread, it seems the government has adopted a new stance. This has left many questions for the decommissioned prime minister and decommissioned minister of health to answer.

Rutte began by addressing the uncertainty of the current situation in the Netherlands, saying “we are in a tense and also uncertain phase of the corona crisis.” However, he offered us some hope, in the shape of a roadmap.

“We all long for certainty, for a clear plan. We can show which direction it is going. We have captured that in a roadmap.”

De Jonge also addressed the roadmap. He has said there are three ways out of the corona-crisis: restrictions, testing and vaccinations. “The way back is going cautiously, in small steps”, says De Jonge. However, it seems the roadmap has not yet been released to the public.

From the beginning, the outlook is not positive, with Rutte saying “a third wave seems inevitable to come to us.” He has confirmed that “it is inevitable to extend the current lockdown to March 2nd.”

For now, it is expected the curfew will end on February 10. However, this may still be extended, Rutte has said. He explained that two weeks have not yet passed since the curfew came into effect and as a result, the effects of the measure are not known.

He said that the Dutch government has asked for the advice of the Outbreak Management Team (OMT) and expects an answer by the end of the week.

When will shops reopen?

Shops will reopen for click and collect and delivery on February 10. However, customers must order from their own homes. This is in accordance with the OMT’s advice, who claim that so long as there aren’t too many people inside a shop, the risk of infection is low.

By ordering products online, the hope is that people will spend as little time as possible inside the stores. Shop doors must remain ajar and people may only enter to collect their order.

What about the British variant?

Tonight, the British strain was once again central to discussion. Rutte explained that due to the various new strains of coronavirus — British included — the Netherlands cannot afford to relax too quickly. “The R-value of the British variant is 1.3”, said Rutte. “We cannot avoid this rapid turnout. We will be billed if we are too optimistic now.”

It seems the experts are of a similar opinion to the Dutch cabinet. Epidemiologists Patricia Bruijning, Alma Tostmann and Amrish Baidjoe have told the NOS that they believe it is too soon to begin easing restrictions in the Netherlands.

“I think it is still a bit early,” says pediatrician epidemiologist Patricia Bruijning of the UMC Utrecht. “With the current measures it is already complicated to get the R-number below 1, let alone if you are going to relax.”

Alma Tostmann of Radboud UMC believes that the government should wait another two weeks. “Then you lift it over the spring break and you can see how things are going,” she says.

Only the primary schools will be opened — with extra measures

Rutte has explained that primary schools and childcare will open as planned on February 8. He emphasised that extra strict measures will be implemented in order to prevent the further spread of the virus. “If a child has a positive test, the entire class or group will be quarantined and tested on day 5. We will also conduct more intensive testing and source and contact research.”

He also added that the risk of contamination is lower when children are involved. “Adults usually get the virus from other adults, not from children.” He then briefly addressed the issue of secondary education, saying that secondary schools will not be opening this month and only at the beginning of March if the 1.5-meter rule can be followed.

The decommissioned Dutch cabinet has asked for the help of the OMT in order to restructure its approach to the new variants of coronavirus. “Because of the great concerns, we ask the OMT to advise again on the entire package of measures,” he said, “then we will take stock again.”

What are your thoughts on the message by Rutte and De Jonge? Leave a comment below!

An abortion pill that can be ordered online, regardless of US state laws: this is the lifeline for many American...