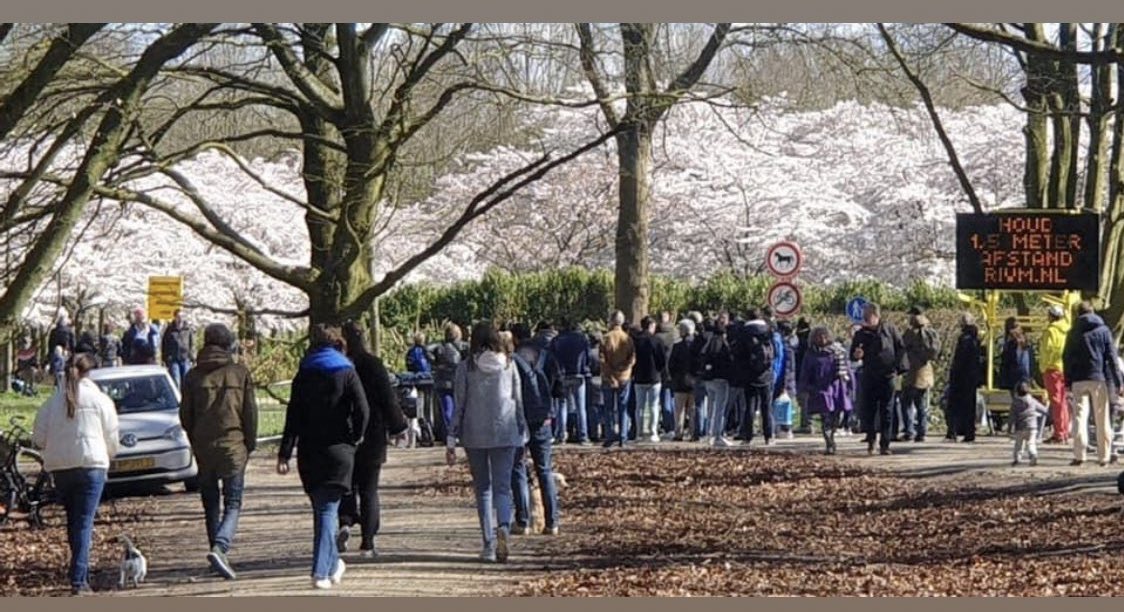 The coronavirus is wreaking havoc throughout Europe, as countries are attempting to implement stricter and harsher measures in order to contain its spread.

While the Netherlands also has numerous cases of the virus, and the government has already recommended that people stay at home during this crisis, not everyone seems just as bothered.

Spring walks through forests and beaches

The good weather certainly makes it difficult to stay indoors, but nevertheless, if we are to go outside, we should at least respect social distancing rules and keep a distance of at least 1.5 meters from one another.

It seems like these safety precautions are still a mystery to some people. People on social media have expressed their anger, annoyance and concern at groups of people who are going out outdoors, reports NOS.

The scene above is from the cherry blossom tree park between Amstelveen and Amsterdam where people seem to be unable to read big signs which tell them to be at 1.5 meters away from each other.

In Zaandvort and Bloemendaal, so many people flocked to the beaches that the mayors of the cities had to issue a warning to prospective beachgoers not to go during these times of crisis.

The NS, which has allowed some trains to keep running in order to keep people in vital positions to do their jobs, has also noted that there are crowds of ‘day visitors’.

Hardware stores have also had complaints to make over customers not respecting the distance between people, leading to new measures in stores. For example, in some stores there are now stripes around the checkout area so that customers keep distance from one another.  Glass panes have also been places in front of the cash registry in order to protect employees of stores.

Security guards also have the role of enforcing the distance between people, yet they cannot always be 100% successful.

Another place that has gotten quite busy with people are waste disposal sites. Cars queue up, in some places with a waiting time of an hour, in order to dispose of their waste. Monique de Jong , a representative from ROVA, a waste collection company, urges people to only come if really necessary, and to try to save their waste whenever possible.

In the meantime, in the cities, where shopping areas are closed, there are barely any customers.