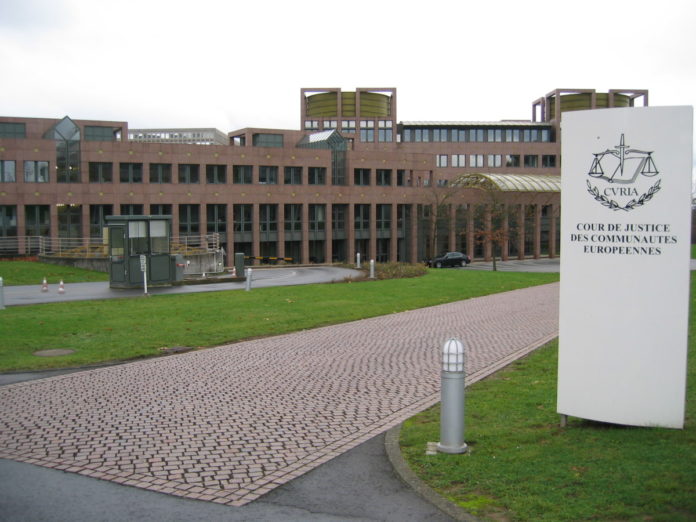 In its ruling, the European Court of Justice (ECJ) noted that European consumers must have access to information that enables them to “make informed choices, with regard not only to health, economic, environmental and social considerations, but also to ethical considerations and considerations relating to the observance of international law.”

The EU is Israel’s biggest trading partner. Israeli goods produced within Israel’s internationally recognised borders benefit from a preferential tariff and the ruling does not change that. It is estimated that only 1% of all Israeli imported goods come from settlements.

The case came to the European Court of Justice after France’s top court asked for clarification form the ECJ when a winery based on an Israeli settlement, and the European Jewish Organisation, challenged France’s application of a previous ECJ ruling on the labelling of settlement products. That ruling supported the use of origin-identifying tags but did not make them legally binding. The current ruling is mandatory, but enforcement is left to each European Union member state.

The Palestinians celebrated the decision, calling it a “legal and political obligation”. Israel’s Foreign Ministry denounced the ruling, saying it set a “double standard” that singles out Israel while there are many other territorial disputes worldwide.

Israeli settlements are Jewish colonies progressively being built on Palestinian land captured in 1967, during the Six Day War. They are mainly located in the West Bank and East Jerusalem, the land where Palestinians claim their future state should be. There are also settlements in the Golan Heights, a piece of land that Israel took from Syria during the same war. Today there are around 700.000 Jews living in West Bank and East Jerusalem settlements, completely cut off from the surrounding Palestinian communities and fully connected to Israel through a system of settler only roads also built on Palestinian land. Settlers comprise 10% of the Israeli population.

If you look at the map, built-up Israeli settlement areas occupy about 2% of the Palestinian West Bank but the land controlled by settlement activity, such as agriculture and roads, amounts to much more than that and requires a heavy military presence. pic.twitter.com/pXkJwvaUwW

The European Union considers Israeli settlements illegal under international law because they violate article 49 of the fourth Geneva Convention. Article 49 states that: “The Occupying Power shall not deport or transfer parts of its own civilian population into the territory it occupies.” The Geneva Conventions are the basis for International Humanitarian Law, or the Laws of War, which establishes the rules of armed conflict among all countries of the world in an attempt to limit the effects of war. All United Nations member countries have ratified all four Geneva Conventions, including Israel and the U.N non-member observer, Palestine.

According to the United Nations High Commissioner for Human Rights the settlements and their expansion pose a serious threat to the human rights of Palestinians. These threats come in the form of arbitrary land seizure, restrictive planning, permit and construction, placing many Palestinians under threat of displacement, and various forms of settler violence.

In its official page, the Dutch government states that it “regards the Israeli settlements in the occupied Palestinian Territories as illegal. They are in conflict with international law and pose a serious threat to the peace process.” It also emphasises the good relationship it has with both governments as well as the commitment with the security of both nations.

On Tuesday, November 19th, a motion passed on the House of Representatives (the lower chamber of the Dutch bicameral parliament), pushing back against the ECJ ruling. The motion, which passed by 82-68, asked the government not to comply with the court’s decision, at least not until all territorial disputes have the same treatment. The motion is unlikely to have actual effect on the government’s policy and is mainly symbolic.

In the capitalist society we live in more and more people are becoming aware of the power consumers have. The impact that certain economic dynamics have on humanity and the planet are becoming increasingly clear and from ‘cruelty free’ products to shopping second hand, there’s a growing movement of conscious shoppers.

The European Court of Justice decision is a highly politically charged one, but it should also be understood within the context of more transparency for consumers to spend their money according to their beliefs. Only buy into it if you are ok with it!

Previous articleA new high-speed train will run to the north of the Netherlands from 2023 (with just one problem…)
Next articleSinking city: Overtourism and how it affects Amsterdam

Spotlight on! The Hague shines in magical light festival

While the Christmas lights are slowly being taken down, the dark persists — leaving some rather gloomy Dutch winter days ahead. But not for...