Fight for Your Right! (to sing sexist songs?) 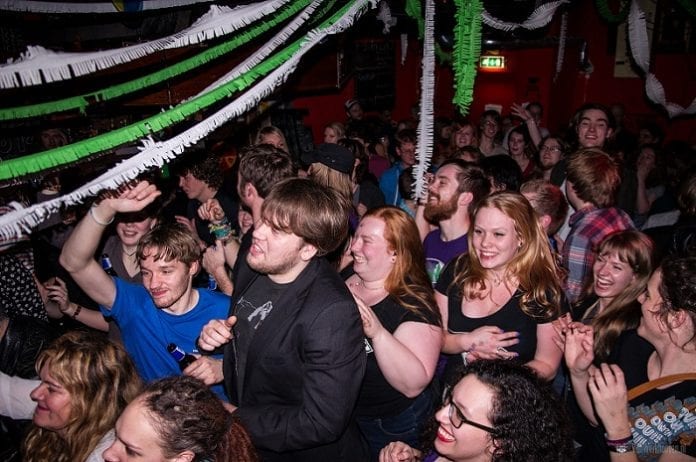 In the mid-eighties, the Beasty Boys released the album Licensed to Ill, which is now mostly forgotten, except for one track you may very well know by heart. We’re talking of course about their hit song (You Gotta) Fight for Your Right (To Party!).

You may also already know that the song was, in fact, a joke. It was a parody of part of the eighties culture that was mindlessly hedonistic, wherein excessive partying and nonstop drinking was presented as a form of rebellion. At least, it was supposed to be a parody, but back then it was lost on a lot of people who embraced the Fight for Your Right! attitude unironically.

Well, that joke has gone full circle and bit itself in the ass, because now we need to fight for our right… to sing sexist songs? Such is the case now that a university association from Utrecht has seen its funding cut because of the content of a song book. We’re not making this up (also, this link contains strong language). The song book Te Lam om te Zingen (‘Too boozed up to sing’) is now banned for, shall we say, its rather imaginative ways of describing sexual intercourse.

How bad is it exactly? I gotta admit: when I read the article last week, it put a smirk on my face. Label me a chauvinist pig if you so please, but I found the lyrics to be, frankly, equally clever as funny. On the surface, there’s nothing brilliant about it, but there’s a certain ‘giddiness’ about the way that students embrace the stereotype of the sex-addicted party monster, if only ironically. Those who have actually lived the student life may be all too aware that it’s hardly the sex and alcohol orgy that it’s often portrayed to be. For most of us, it was more about trying to balance part-time jobs with full-time studies, all while trying to sort yourself out now that you’re a young adult with all new choices to make and responsibilities to take.

Student life, especially for members of studentenverenigingen, comes with its own subculture, complete with norms, fads, traditions, slang, and a specific code of language. A depraved and sex-obsessed sense of humor is part of that, and I personally think it is sad that even this is now being fought by institutions, all for the sake of not trying to offend. Reading the article last Wednesday was funny, seeing the debate about this evolve over the next few days was rather depressing.

There is nothing new or unusual for there to be an uproar about student associations. Every now and then, details about hazing (ontgroening) gone out of control will find its way to the media, be the hottest item on discussion, only to disappear a few days later. What is different here is what this is about. This isn’t about government or academic organizations trying to control what people are doing, they’re now actively trying to control what people are thinking. Remember, the university does not have a problem with students getting drunk and singing silly songs, it specifically has a problem with the content of these songs. It’s an offense (both legally and morally) to be physically abusive, no matter if it’s in the context of hazing. But now we are seriously considering the idea that singing socially undesirable lyrics is something that should be punished by institutions.

Previous articleThe storm is coming! The Netherlands braces for a stormy week ahead
Next articleNeuken in de keuken – most Dutchies satisfied with their sex life