What better way to wake up in the morning than to the sound of ice cracking? Drama on the Amsterdam canals as a man decides to drive his boat along the Prinsengracht.

RTL Nieuws reports that the sailor broke a thin layer of ice along the canal while attempting to move his boat out of the city to avoid it freezing over. This move did not make him popular amongst skating fans.

With the weather getting even colder, many Dutchies were looking forward to a weekend of skating. Earlier this week the municipality banned sailing on number of canals to allow ice to build up as part of a set of measures known as the IJsnota. The measures also included the locks being closed.

Passers by were not too happy as you can see from this tweet. The Dutch police were called to the scene and issued the sailor a fine. Goes to show how seriously the Dutch take ice skating!

Photographer Thomas Schlijper caught an exclusive interview with the infamous sailor. According to Schlijper, the man realised his mistake as soon as he heard the ice cracking. The poor guy is deeply ashamed being a keen skater himself.

Have you seen anything strange happening on the ice? Let us know in the comments below! 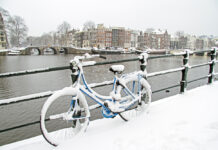 Snow is on the way to the Netherlands — possibly starting tonight!

Dutch police called over suspicious gun — turns out it’s made of chocolate!