Did you think you were starting to understand the Dutch weather? Don’t let yourself be fooled. The snow and frost are here to stay. The Netherlands just experienced the coldest night since 2013 — and it’s only going to get colder!

It almost feels like the Dutch weather suffers from schizophrenia. Last week we were basking in the sun, enjoying a rare rainless day. Last night, the temperature in some parts of the country dropped below -15 degrees, reports Weer.nl.

The frost is coming a month later than usual and it is here to stay. January tends to bring more severe frost, but of course, it is 2021. Things are not going as planned.

This morning will be chilly, with temperatures reaching around -6 degrees in the northwest and -12 degrees in the east and the south of the Netherlands.

If you’re hoping for the cold to ease up in the afternoon, you’ll be disappointed. The temperatures will stay around 5 degrees below zero. Luckily, Wednesday promises a lot of sunshine in most regions, so at least we have something to look forward to.

If you’re not a fan of the cold, we have bad news for you. In the coming nights, we can expect to see temperatures between -13 and -20 degrees.

Good news for ice skating lovers — seems like we might be getting that corona proof space for ice skating after all. The IJsselmeer is expected to freeze over completely, shares the Dutch meteorologist Renier van den Berg on Twitter.

He continues to add: “The chances are that the severe frost will persist until Thursday, February 18. After that, it’s (obviously) uncertain.”

What do you think? Are you already plotting your escape to the Caribbean? Or will you be enjoying this rare sight of frost and snow in the Netherlands? Let us know in the comments below. 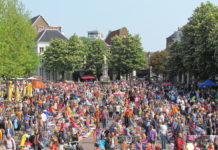