Press conference: the Netherlands is officially going into a hard lockdown 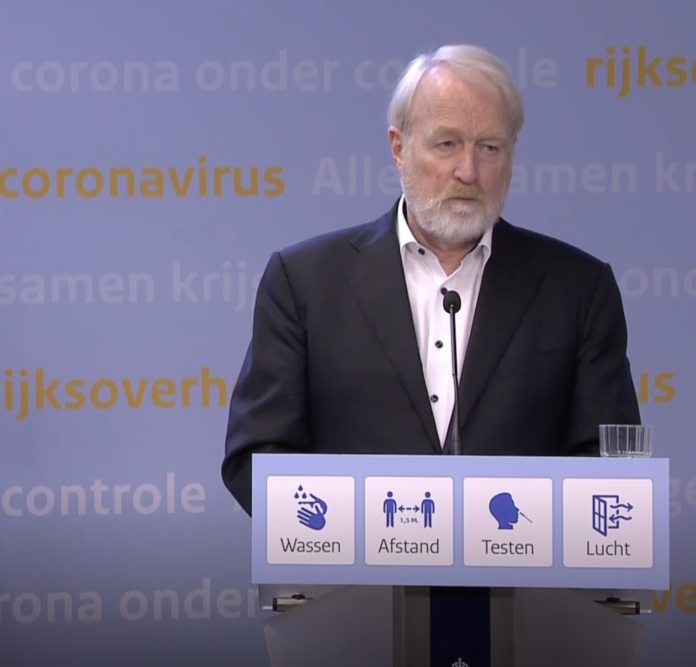 It’s official, five days before Christmas, the Dutch cabinet has decided that the Netherlands needs to go into a hard lockdown. Why? One word: Omicron.

On Friday, the Dutch Outbreak Management Team (OMT) made it clear that they were worried about the rapid spread of the new coronavirus variant. As a result, the cabinet held an emergency meeting at the Catshuis this morning.

The OMT advised the government to adopt a number of strict measures which would ultimately bring the Netherlands into a hard (actual) lockdown for the holiday season — and the cabinet has listened.

At tonight’s press conference, Prime Minister Mark Rutte and Minister for Health, Hugo de Jonge were not alone. This time, standing with them was the Head of Infectious Disease and Control at RIVM, Jaap van Dissel.

So, what’s our Christmas and New Year going to look like? As Rutte says, “put simply: as of tomorrow, the Netherlands will go once again into lockdown.”👇

Everything considered non-essential will close

It looks like there will be no going out for dinner with your family, or hitting the shops for a pre/post-Christmas shopping spree. Restaurants, cafés, shops, theatres, museums, and all other establishments that are considered ‘non-essential’ will shut their doors.

However, while the doors may be shut, pickup will still be available at shops and in the catering industry.

Only essential establishments such as pharmacies and supermarkets will be allowed to remain open. They must close at 8 PM.

The entertainment and cultural industries will not be the only sectors to shut their doors, however. While it was announced earlier this week that primary schools will be giving the kiddies some early Christmas holidays and finishing this Monday, school is now out for all levels of education.

This means that those in secondary school and third-level institutions (yep, that’s you uni students) will also be asked not to return (physically) to the classroom this week. On January 3, the cabinet will meet again to decide on whether schools should reopen on January 10.

A maximum of two visitors

The number of visitors allowed in your home per day will be reduced from four to two. However, there will be an exception on Christmas day, then, you may have a maximum of four guests inside.

This is only an exception on Christmas day though, so if you were hoping to have a few guests round on New Year’s Eve, you need to start cutting names.

This restriction will also apply to the outdoors. Now, a maximum ‘group’ of two people will be allowed outside (if you can even call it a group.) This does not apply if you are all from one household.

If you were hoping to hit the gym as part of your New Year’s resolution, think again. All indoor sports establishments will close, except for swimming lessons. For adults, a maximum of two people may exercise outdoors between 5 AM and 5 PM. Children may play as part of teams outside.

Travellers from outside the EU/Schengen area must test before arrival

Speaking with a journalist, De Jonge dropped another bomb, saying that anyone travelling from a country outside the EU/Schengen area who wishes to travel to the Netherlands, will now have to test.

However, he does not elaborate on this. 😤

When does this all come into effect?

If you weren’t certain of just how worried the Dutch government is about the Omicron variant — perhaps this will bring it home. All of the above measures will go into effect as of tomorrow morning at 5 AM.

Yep, not much notice has been given — and this has been done on purpose. The worry is that, if given time, there will be a rush on shops, restaurants, and other establishments, ultimately leading to more cases of Omicron.

Why is this all happening now? While the Netherlands may be seeing a slight drop in coronavirus cases, the OMT is worried by the speed at which the Omicron variant is spreading through cities such as Amsterdam.

Van Dissel was present to explain why this lockdown is necessary. He began by explaining, that the Omicron variant is proving to be more infectious than the Delta variant and also more powerful against vaccines. “The immune system cannot recognise the Omicron variant,” he explained.

As a result, he explained that the Netherlands needs to act now in order to prevent a fifth wave by New Year’s.

He gives us some hope, however, explaining that a booster shot of the coronavirus vaccine does help battle against the bad symptoms brought about by the variant.

“We know that booster vaccinations refresh the immune system. This means that protection against omikron increases after the booster, not only against infection but also against serious disease.”

Booster jab invites for everyone by January 7

Yet again, De Jonge has brought forward the date by which everyone over the age of 18 will be invited to receive a booster jab. Now, as of January 7, everyone should be able to book themselves in for an appointment.

De Jonge asks that everyone books online instead of calling so as to help ease the pressure on the GGD. The aim is that by the second half of January, “we will have finished the booster-offensive.”

How do you feel about the hard lockdown? Tell us your thoughts in the comments below!