Schuwer on the Trump government: what the former Dutch ambassador to the US has to say 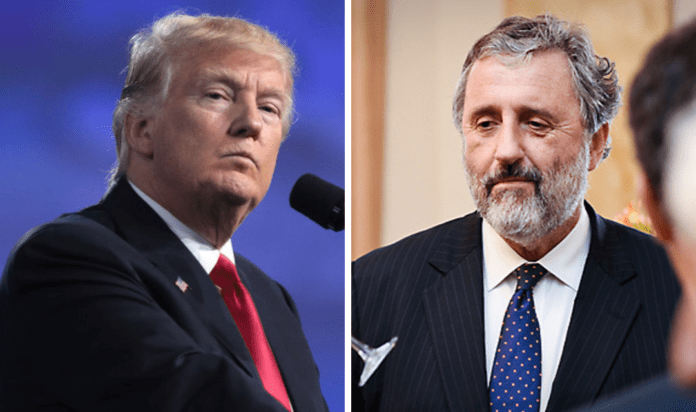 The Netherlands and the United States have enjoyed long-standing history together, but could it be on its way to simmering down? That’s the feeling some diplomats, diplomatic experts, and Henne Schuwer, the recently retired Dutch ambassador to the US, are sensing. Now Schuwer has told all in a recent interview with NRC, revealing what it was like working as a diplomat in the Trump era.

Earlier this year, his British colleague, former ambassador Kim Darroch was forced to leave his job when it came to light that he thought the Trump administration was “clumsy and inept”. You see, being a diplomat is all about being…well, diplomatic.

Schuwer, therefore, had to keep his head down and his opinions to himself – not just to keep his job but to also fulfil his duties as the Dutch ambassador to the US.

But now that he is retired, he’s spoken out about the inner workings of the Trump administration.

Schuwer on the Trump government: Trump is driving the country apart

In the first two years of the Trump administration, things appeared chaotic as Trump’s unpredictability meant the work of diplomats changed drastically.

In the pre-Trump era, diplomats would work with the State Department officials to get their messages and work through. However, during the Trump administration, that channel dried up. Instead, they had to change the way they received information about the White House: by waking up at half-past six to check what the president had been tweeting.

Schuwer said that the “influence and importance of Washington” combined with a president who frequently vocalises/tweets polarising opinions, is reducing. “Not just the federal government is strong, but also the states,” he explained. With the states breaking away from under Washington’s thumb, his shrewd comment where he made a comparison between Trump in the US and Boris Johnson in the UK in respect to driving their respective countries apart seems justified.

“So we started to concentrate more on that,” he said. When their visions started shifting on to the individual states, they started looking at America “differently”. Schuwer admitted that too much attention was being given to Washington initially. “Our idea was that it would be better to send small clubs into the country, especially to states where we don’t normally go, like New Mexico and Alabama.”

Schuwer on the Trump government: Rutte did not let Trump walk all over him

The former ambassador also asserted that Rutte held his ground against Trump. We all remember when Rutte visited the US and the infamous moment of Dutch directness stealing the spotlight, don’t we? If you don’t, let’s refresh your memory.

Prime Minister Mark Rutte has made two visits to the US – one in July 2018, and one in July 2019. In the first meeting, they discussed a lot of things, including trade disputes which have arisen.

But more importantly (in some ways), it was in this first meeting that Rutte’s famous “no” moment came. Trump made a statement about how the upcoming EU-US trade talks would be positive regardless of whether there is a substantial deal. Rutte’s resounding “no” to this statement made global headlines at the time.

“You don’t have to put salt on all slugs, but if something is wrong, you have to contradict him,” Schuwer remarks. “It worked out well, Trump saw that he was not sitting at the table with a yes-man, but with someone with whom he could do business.”

Schuwer on the Trump government: we have a powerful economic position in the US, and that’s what we use

So what do you do when you’re working with a (not so successful) businessman? You talk economics, jobs and investments to get him to like you. “We do not play a role in geopolitics as we are not a superpower. We do have an important economic position in America and you can use that,” Schuwer said. “For that, you need a visit from the prime minister who says: “Donald, can I show you something?”

So what did Rutte show the president of America? An A4-sized infographic on a plastic card which highlights the main numbers of the trade relationship. “We had said to Rutte ‘just slide it over the table,” Schuwer explained. “And apparently he does not read his files before such a meeting, because some of those [figures on the card] seemed really new to him. ”

Schuwer on the Trump government: there are serious doubts about Trump being an “ally”

He did also touch upon Rutte’s speech from earlier this month when he had a lot of positive things to say about Trump and some not-so-positive things about Obama. But the ambassador says it served the purpose of staying on “good terms with America”. This speech was also before Turkey’s invasion of Syria following Trump’s withdrawal of US troops from the region.

Sad and devastating news came last week as Turkish troops advanced into Kurdish-controlled northeastern Syria. Having been a long-time ally of the Kurds at the border, Turkish troops were kept at bay. But, the world was shocked when Trump announced that the American troops will be withdrawn.

Like everyone might be wondering, the ambassador raised serious questions about how much the world can trust Trump. “This is a president with whom you can have serious doubts about the concept of “ally”: what does that mean for him?” he wondered. “The Syrian Kurds, now under attack by Turkey, have lost more than 10,000 people in the fight against IS, they have done the dirty work. But Trump abandons them. How can you ever get someone to do something for the Americans?”

What do you think about Schuwers insights into working alongside the Trump administration? Surprising, or expected? Let us know in the comments below!