Scooters and mopeds will be going to the Regular Road 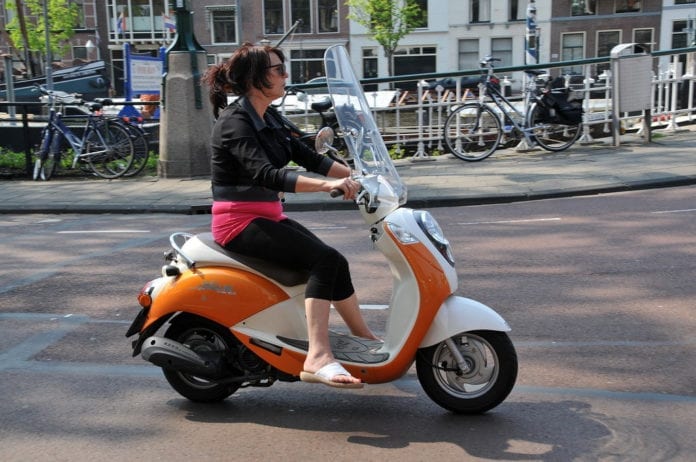 Tired of near-death-experiences when bicycling on the bicycle-path because of those crazy scooter drivers? Well, good news for you – they’re about to send scooters and mopeds to the regular road.

A majority of parliament is in favor of a measure that makes it possible for the municipality of Amsterdam to move moped riders and ‘snorscooters’ to the regular road instead of the bicycle path. VVD and CDA first had their reservations, but are now on board.

‘The problems on the bicycle path are increasing. Our infrastructure in large cities no longer suffices. Let us therefore allow big cities to take measures’, said member of parliament Remco Dijkstra of the VVD. ‘Amsterdam is unique. Let us be pragmatic and start there. Then we evaluate after a year. “

‘Traffic assholes are the problem’

The PVV is against the measure. MP Roy van Aalst speaks of ‘symbolic measures’ that only lead to confusion. ‘Moroccan traffic assholes that terrorize the cycle paths are the real problem. It is a misconception that if the municipality places traffic signs that they will drive decently on the road. Certainly if this is hardly enforced in the Republic of Amsterdam. ‘ – (What the hell PVV? That’s even out of bounds for you idiots)

The municipality of Amsterdam is ready for it

The municipality has waited a long time for a go-ahead from parliament. If the legislation is adopted without any motions today, the new traffic rule is likely to start in Amsterdam on the first of July, says a spokesperson for the municipality. “We have prepared everything for this. The measure must still pass the Council of State. ‘ January the 1st of 2018 is too soon for the legislation and appropriate measures to be implemented.

So what do you think? Good idea or idiotic that scooters and mopeds will go to the regular road?

Previous articleHave your Afternoon Tea as a true Dutchess at ‘THE DUCHESS’
Next articleChristmas in Leiden! 3 Things to look forward to during the ‘Winter Wonder Weeks’