It’s time to shove your ice skates and warm gloves back into the closet with Dutch temperatures expected to climb up to 17 degrees this weekend.

If you thought taxes in the Netherlands were confusing, try making sense of the Dutch weather. Last week we were able to enjoy snowball fights, natural ice skating, and magical frozen canals (which had led to some strange occurrences).

Now it may be time to take out our spring jackets and finally enjoy a bit of sunshine, because “spring is coming,” according to Buienradar meteorologist Martijn Dorrestein on RTL Nieuws.

This also means that the Code Red weather warning has come to an end. Buienradar confirmed this great news in a tweet:

Next to warmer temperatures, we can also look forward to a bit of sunshine. “The sun will already peek out on Saturday, and Sunday will be full of sunshine. The winter is over,” adds Dorrestein.

Are you looking forward to finally getting some vitamin D? Let us know in the comments below! 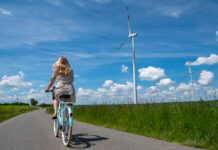