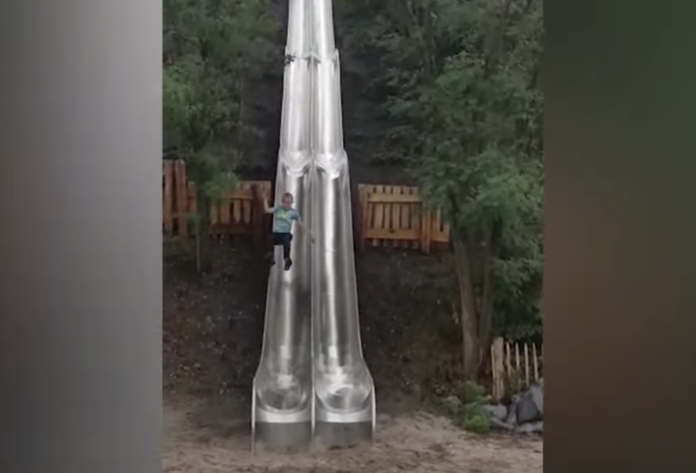 A video of a young boy almost flying off a slide at the amusement park Billybird Park Hemelrijk in Volkel, North Brabant, has prompted the attraction to be closed down for investigations.

In the video the boy is seen beginning his descent down, sliding happily over the first bump, and then flying dangerously into the air on the second and final bump. He hovers precariously above the edge of the slide, threatening to fall metres onto the ground below.

Fortunately, gravity deposits him heavily but safely back onto the slide where he completes the whizz to the bottom.

Surrounding visitors and the boy can be heard giggling in the video when it occurred, but the guardian of the boy at the time sent the video to his father, Brett Van de Beurcht.

“At first I had to laugh at the video, but when I had seen it several times I was shocked,” Van de Beurcht explained to Editie NL. “Fortunately, no serious accidents happened. I can’t think about it.”

Van de Beurcht sent the video to the theme park, who decided to immediately close the slide. “We have sent the images to the supplier for further investigation. The slide will remain closed for the time being,” Wilke Arts of Billybird Park Hemelrijk told EditieNL.

“The slide is of course certified but we want to be able to guarantee the safety of all visitors at all times,” continued Arts.

The attraction only opened in April this year. This is the first formal complaint about the slide which has since been closed for investigation.

Been to this theme park or slid down this slide? Know of a theme park attraction gone wrong? Let us know in the comments below!

The RIVM has released its weekly coronavirus figures from October 12 to October 19. The number of hospitalisations and ICU admissions have increased sharply,...

It’s on: Dutch railway in a battle against graffiti sprayers

Annually, the NS spends about €10 million removing graffiti from trains. As a result, the organisation has announced new measures to combat graffiti vandalism. With...
Current Month