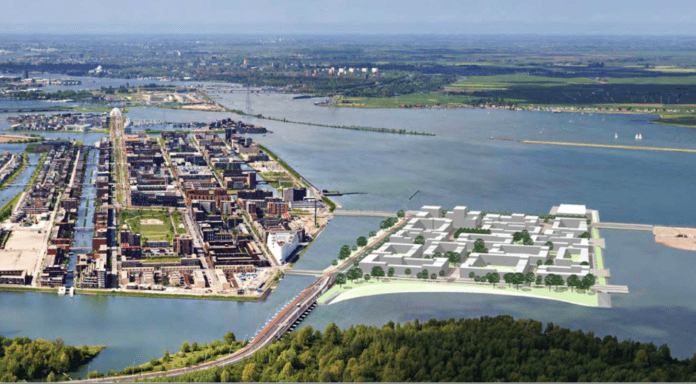 As we all know, the Netherlands is an incredibly densely populated place and especially in Amsterdam. Over 20 years ago they came up with a new plan to build man-made islands and on the waters of the Ijmeer lake in 1997, the scheme began. A plan which meant that 18,000 homes would be born. Now Center Island in Amsterdam is ready to be built on!

Center Island (AKA Centrumeiland) is the 7th island and has been used as an art installation and campsite since 2015. And now it is finally ready for new homes to be built on it! It will ultimately house over 45,000 people in Amsterdam. What’s more, the island community will be mostly self-built, environmentally friendly and affordable. It’s also expected to remain as green as possible, despite many new homes. Plus, it’s only 15 minutes from Central Station!

I know what you’re thinking…water. Of course, you’re in the best place for water management and they are using all of that knowledge to help prevent any issues that may occur on this new man-made island. Each new home will be elevated above the level of the rest of the public space around it on mounds called Terpen, in order to protect it from any flooding. The greeny on the island will have storm channels that will be able to redirect rainwater so it doesn’t flood drains.

In terms of the environment, the houses will be connected to a district heating system, not natural gas, this is along with being triple glazed (so these places will be nice and toasty). The houses will be able to collect rainwater and it will be solar panelled, so it reduces water and electricity usage.

How will they look?

Although the houses will incorporate lots of things to make them environmentally friendly, they will still be aesthetically pleasing. The buildings on the island will all be different heights and have a variety of differently shaped balconies, roof gardens and back gardens. They want to make it as green as possible. Everyone will have their own nice outside space and that is the main thing.

More islands will be ready hopefully by next year – one of them relevantly named ‘Beach Island’ (sounds like somewhere I’d wanna live!)

What do you think about these new cool Amsterdam islands? Let us know in the comments! 😉

Amsterdam might be a city of cyclists, but that doesn’t mean you should shy away from driving to, from, or...