A trip to Gent! Why you want to visit the charming town of the Flemish master Van Eyck in 2020 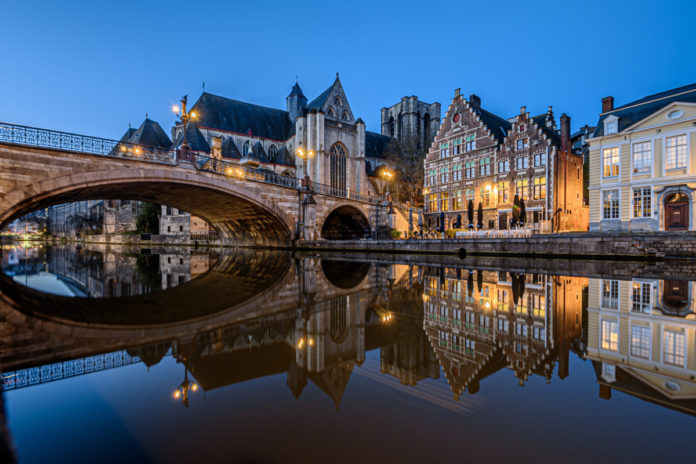 Welcome to another episode of DutchReview tripping, we’re off to our fair neighbour to the south, Belgium, where the roads are worse but the food and beers are better. This time we visit the lovely Flemish town of Gent, and 2020 especially is the year to this charming historic city.

Gent! Why should you go to Gent? Is it the beers? Is it because it hasn’t been overrun with tourists yet? Is it the buzzing student culture? Or the fact that it is all about the renowned master Van Eyck? As so often, asking all these questions is answering them. Gent is a lovely town for a getaway from the Netherlands and especially for the art and culture lovers, a trip to Gent won’t disappoint. (Ghent? We’re gonna go with Gent)

We usually take our own pics in all of these city reports, but as it happens the wonderful Nora Maria was also going to Gent, she was kind enough to let us use some of her pics (check out our photo report together right here!)

What’s there to see in Gent?

Before we talk about all the nice things to see and do in Gent, allow me to wholeheartedly recommend getting the CityCard Gent. If you’re there for more than 24 hours you should get the 48h card. For just 30 euros you’re gaining free access to more or less everything there and free transport and a free bike rental. All of this makes the experience tranquil, no more doubting if you want to visit a museum for 12 euros and if you’ve got time for it. Just peep in and do and see whatever you feel like for how long you feel like, it’s free and you’ve got a bicycle!

Thank me later, because there’s plenty to see in Gent. The city centre is nice, cultured, compact and old – reminds me of a slightly bigger version of Delft or Leiden. Let’s start you off with some of the classic things to do when in Gent.

Enjoy the scenery at the Graslei and the Korenlei

You can’t miss it and you don’t want to miss it. These two streets are overlooking the central canal of Gent and it’s the stuff Instagrammers dream of. It’s a bit touristy of course, but you can understand that because the scenery and houses are so damn beautiful. Return in the nighttime for that fairytale shot.

Whereas all the good Dutch cities have their buildings date back to the 1600, these Flemish towns are a bit older and usually have houses dating back to the 1400’s. Gravensteen a.k.a the ‘Castle of the Counts’ even dates back to the 12th century.

You wouldn’t say that it’s so old since it stayed nicely intact, for those that like it – there’s also an interesting torture room – for if you really want to get that Game of Thrones feeling.

The centre of Gent is lovely, but 2 buildings are not to be missed. The Cathedral is magnificent and will just draw you in. The Belfry is an architectural highlight of Gent, climbing that tower is an experience that will stay with you for years.

Have your picture taken on the bridge near the Korenlei, jump on a cliche (but still great) canal tour through Gent, eat a neuzeke and sit down and enjoy life with a beer or two. Gent has enough to offer you but it’s still keeping it compact without being overrun by tourists. Add a vibrant student comunity and you can imagine that it’s a nice spot to chill and hang out for a few days.

Pro-tip: Make sure to visit the Museum quarter at the Citadelpark

I’m not sure we can call this tip ‘off the beaten path’, but it’s easy to stick around in the centre of Gent. But if you have any cultural feelings you shouldn’t, you’re a mere 15 minutes walk away from one of the nicest cultural quarters of Europe. The Citadelpark, nice enough itself, boasts an impressive array of grand museums.

There’s the S.M.A.K. museum, offering all those fine modern art pieces to change spice things up in life – we were thoroughly impressed.

And just opposite is the winner of the day, the Museum of Fine Arts. This one has an excellent and impressive collection of new and old things, paintings and statues and everything in between. We couldn’t visit the complete museum, but those of you planning a trip to Gent in 2020 can though. Since then the city will be in hyper-mode as the Flemish master Van Eyck is celebrated extensively throughout the city.[td_smart_list_end]

In 2020, Gent will be celebrating the life and work of Jan van Eyck, a fifteenth-century painter who revolutionised the art scene of the day. The celebration will be called “OMG! Van Eyck was here” and will be celebrated through theatre performances, exhibitions, visual art, dancing, design, fashion, gastronomy, shopping, and music. We’re going to give you a rundown of some of the events we’re most excited about: but there’s going to be so much more to see as well, so we really recommend you go and check out the full programme on VisitGent’s website.

In case you need a reminder, here’s a nice clip of the maker of the Lamb God:

The largest Van Eyck exhibition ever

Given van Eyck’s enormous influence on the art world, it’s not at all surprising that one of the events we’re most excited about is an exhibition of his works. Not just any exhibition, though: the largest ever. It will be called “Van Eyck: An Optical Revolution”. Only twenty of van Eyck’s paintings have survived, and you can expect the majority of them to be present at this exhibition. It’ll run from 1 February to 30 April next year, so get buying those tickets now!

Must See in Gent: The Adoration of the Mystical Lamb

Special attention will be given to the famous Gent Altarpiece, “The Adoration of the Mystical Lamb” (in Dutch Het Lam Gods). This was painted by van Eyck between 1420 and 1432, and is considered a masterpiece and a world treasure. There will be several events centred around this artwork, including the opening of a new visitor’s centre at St Bavo’s Cathedral, where the altarpiece lives, and an overview of the six centuries of history of the painting.

But there’s plenty of other attention being given to Van Eyck, a good example of this are the impressive graffiti paintings found throughout the city. Which in a way is just Gent showing off its old and new appealing features.

Let’s get to some practical details on a visit to Gent.

How to get to Gent

Gent is located more or less in between Brugge and Brussels and South of Antwerp. You can take the car of course, but it’s probably a good two-hour drive with some added time if you’re going via the infamous ‘Ring of Antwerp’. Taking the train is also possible, the Thalys and intercity direct stop in Gent! The Thalys will take you from Amsterdam to Gent in 2 hours and 16 minutes, not bad.

Where to sleep in Gent

We stayed at the Marriott hotel right at the Graslei. It was a completely modern hotel behind a beautiful old facade overlooking the canal. What it lacked in ‘old-timey atmosphere’ it more than made up for it in location and neatness.

Where to eat in Gent

You wouldn’t be surprised that Gent has plenty of classic and modern options. The Flemish kitchen has honestly more to offer than the Dutch one and so eating out in a cosy tavern or such is always a nice idea. We had our classic Flemish meal near the cathedral at ‘T Vosken. Jazzy vibes, great food for nice prices, whisky sours and don’t miss out on those shrimp croquettes!

The gentrification of Gent (double points for wordplay, finally could use this) has also taken place and it’s not a bad thing for the culinary scene. Plenty of other options if you’re not feeling anything for waffles or fries. Fine dining too, we had dinner at Naturel. Where we enjoyed numerous courses and a special setting full of mural paintings and nice details themed as the ‘garden of Eden’, good to see something different than all the regular ‘fancy-industrial’ places.

But there’s something there for everybody in Gent, here’s a nice overview of great places to eat out in Gent.

Oh, and a nice little tip for the sweet tooths reading this one. There’s a little classic candy shop called Temmermans in Gent which is truly a hidden gem, be sure to visit that one! 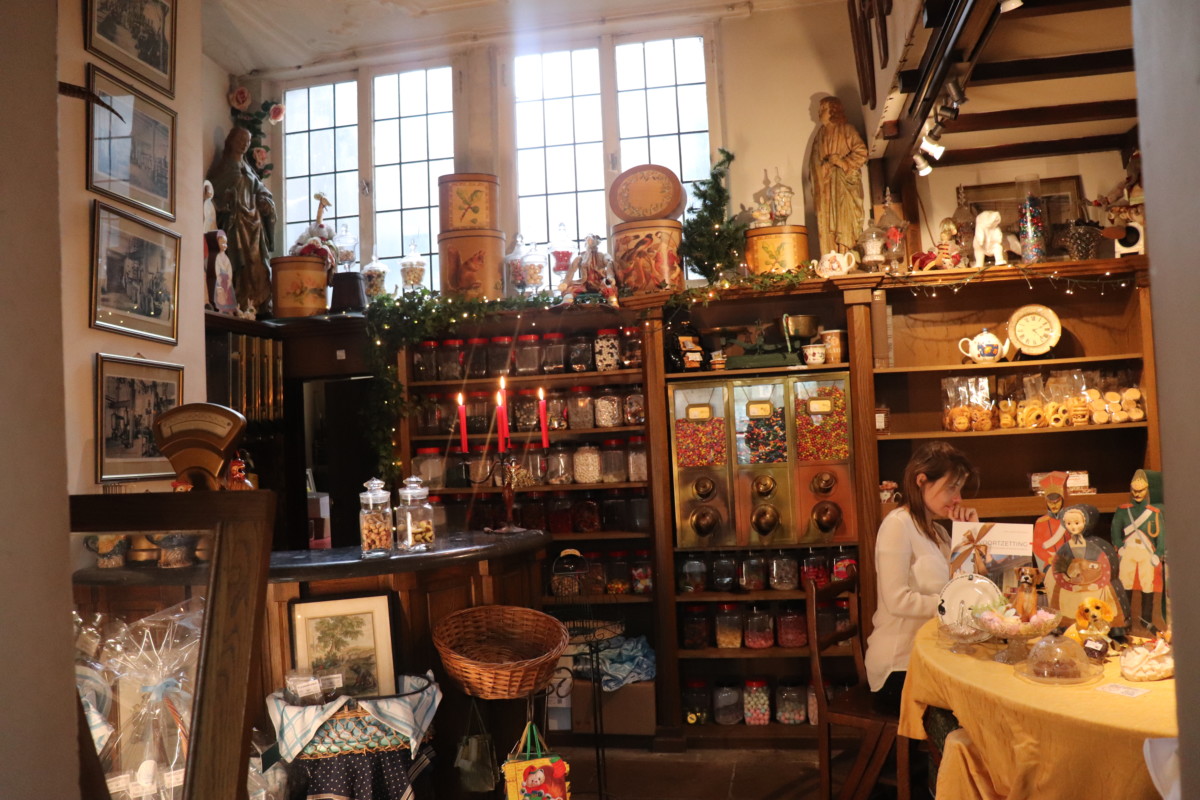 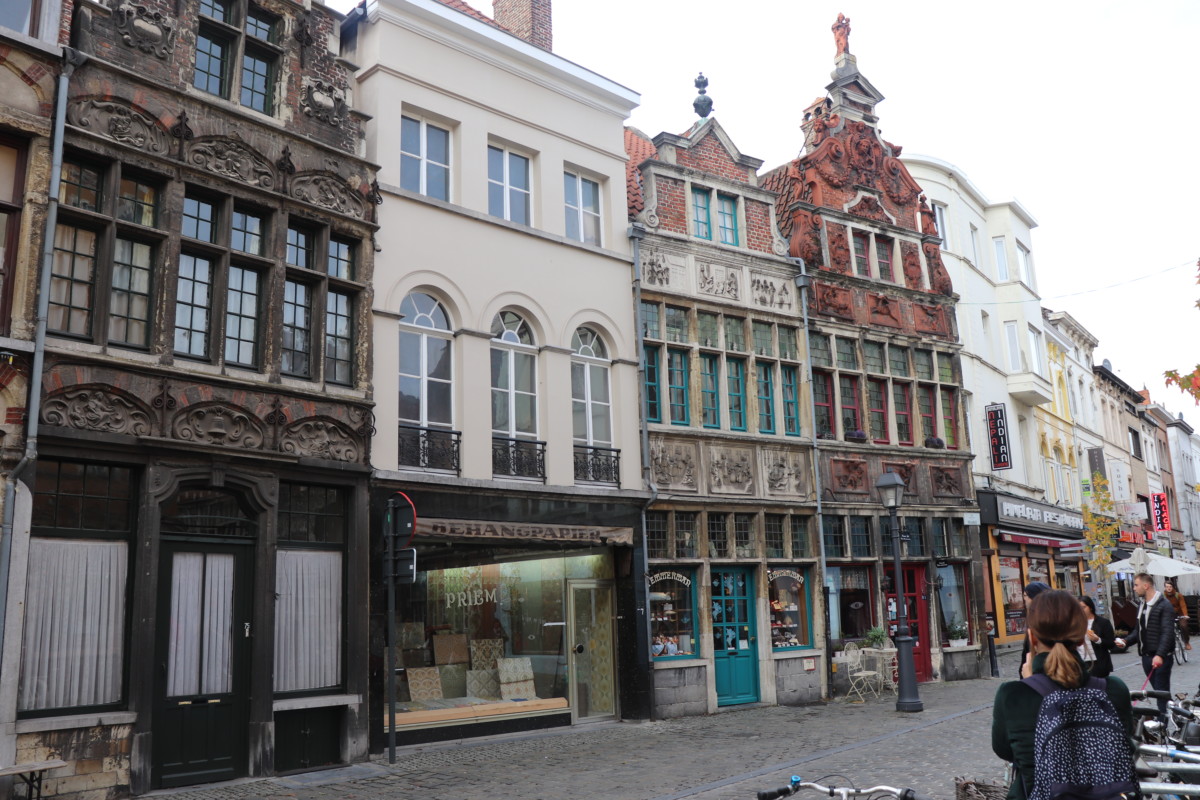 Have you been to Gent? Planning a trip to Gent to see the work of Van Eyck in 2020? Let us know in the comments!

Oh, and since it would be a waste to not share all of Nora Maria’s pics with you: