Chinese food is, let’s be honest, the staple food of people too lazy to cook regardless of where we are living in the world. There are a massive amount of Chinese restaurants in the Netherlands: from takeaway to high-end eat-in-a-floating restaurant kind of place.

As a culturally aware expat living in the Netherlands, you must have heard native Chinese complain about the Chinese food one can eat in the Netherlands. Ever wonder why are they being so critical? In this article, we will take a look into it.

Here are some features of this new breed of comfort food that Dutch people love so much!

When getting Chinese food in the Netherlands, expect weird names you can’t pronounce 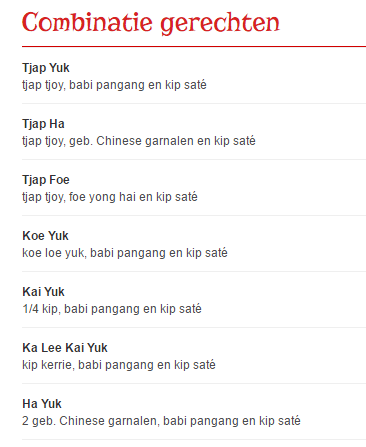 The names of the dish are so weirdly transcribed into Latin alphabets that even Chinese people wouldn’t understand it at first glance. Despite the high barrier to entry in ordering Chinese food in the Netherlands, Chinese restaurants are still going strong. “Foo Yung Hai”, “Tjap Tjoy”, “Tau Foe” – these are just some words that almost every properly fed Dutch kid knows.

Luckily, the owners are usually kind enough to put the Dutch descriptions of what the dishes are under the alien-looking names. If you do not read any of them, then, unfortunately, you’re out of luck.

When you have Dutch-Chinese food in the Netherlands, you don’t get to pick between meat or fish: you get both!

Europeans, especially foodies, often complain about how meat and fish should not be mixed in the same meal, let alone in the same dish.

Dutch-Chinese restaurant menus may have different sections for meat and fish, but don’t be surprised if you find big chunks of beef in your oyster sauce with your squid dish or pieces of shrimps in your stir-fry pork.

You know the best (worst – if you have allergies) part? They don’t always tell you on the menu, because just like the saying on your fortune cookie, they think the surprise is always positive.

Some of us may have this experience: no matter how many times you have ordered takeaway, it never ceased to amaze you how much Dutch-Chinese food you are given.

Dutch-Chinese Food: you are getting Sambal whether you want it or not

I have mentioned that Chinees-Indisch food consisted of Indonesian and Southern Chinese cuisine. I especially highlighted Southern Chinese cuisine because most of the Chinese restaurant owners (or their forefathers) are Cantonese speakers from the South of China. In Southern cuisine, spicy food is almost non-existent, because it is simply way too hot to eat spicy food when the temperature is hanging around the thirties most part of the year.

Of course, this would not apply to people living in the Netherlands where summer days’ temperatures are rarely over twenty degrees, or my Dutch-Indonesian friends, who apparently carry mini-bottles of Sambal in their bags for on-the-go. (Imagine the horror of it breaking in the bags!)

Congratulations! The Chinese food you eat in the Netherlands can’t be found in China!

Given the prevalence of Chinees-Indisch food here, you might think that you can find this everywhere back in China, but you can be very proud that you won’t find it anywhere else in the world. (Okay, maybe in Chinatown in Indonesia, or Indo-town, if it exists, in China).

I love Chinese food, but even I would not want to eat Chinese food all the time. And that strangely happens a lot.

Regardless of whether you are invited to a movie night or birthday party or, even Christmas at a Dutch household, you will inevitably run into the situation where you arrive there and your Dutch friends are pouring boxes of Chinees-Indisch takeaway onto their dinner plates. And best yet, they announce that (surprise!) dessert is a going to be sweet rice pudding ordered from a Dutch bakery. (Well, rice pudding is actually Dutch.)

You can’t blame your Dutch friends. Afterall, Chinees-Indisch food is just one of the most convenient and cost-efficient meals of all. It is kind of a ‘proper’ food you won’t mind presenting to your visitors, unlike delivery pizzas that remind every one of all-nighters in college and shoarma that brings up memories of partying till 5 am pissing drunk and being as hungry as a cow. At least it fills the stomach without, arguably, making you fat like the (also) all-occasion Dutch borrel food that you can find in a Dutch household regardless of occasions and seasons.

Have you had Dutch-Chinese food yet? What do you think of Chinese food in the Netherlands? Let us know in the comments below!