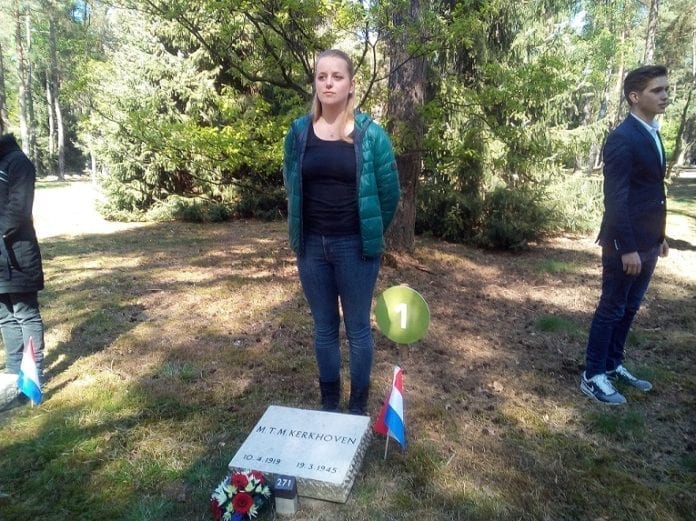 The living honouring the dead at Ereveld Loenen

Keeping the past alive is as difficult as it is important. This is especially true when we remember the victims of war. Here in The Netherlands, we commemorate the fallen on May 4th (Dodenherdenking) and celebrate our freedom on May 5th (Bevrijdingsdag).

Aside from the national two minutes of silence at eight o’clock, every person can find their own way to pay their respects. One such initiative comes from the organization Ereveld Vol Leven (tr.: ‘Honor-field full of life’). Their vision was to give a face to the countless victims of warfare. They did so by inviting people to come to the Loene cemetery, where they would stand behind the grave of someone who had their age when they died.

One of the people to answer this call was Lisan Jensma (26), who went to the cemetery to represent Mélisande Tatiana Maria Kerkhoven (‘Anda’ for friends), a Dutch resistance fighter. After growing up on Java, Anda went on to study Medicine in Groningen. During the war, she joined the resistance. Unfortunately, she was arrested in December 1944 and afterwards brutally tortured by the Nazis. Despite these trials, she refused to give up the names of her fellow resistance fighters. Anda was eventually sentenced to death and was executed on March 19, 1945, less than two months before the end of the war.

With these small but very important gestures such as the commemoration at Loene, we honor people like Anda, who gave up their lives to resist evil. May we never forget.

Previous article7 things to do in the Netherlands when the sun is shining
Next articlePolice shoots confused man in The Hague after stabbing 3 people (Video!)