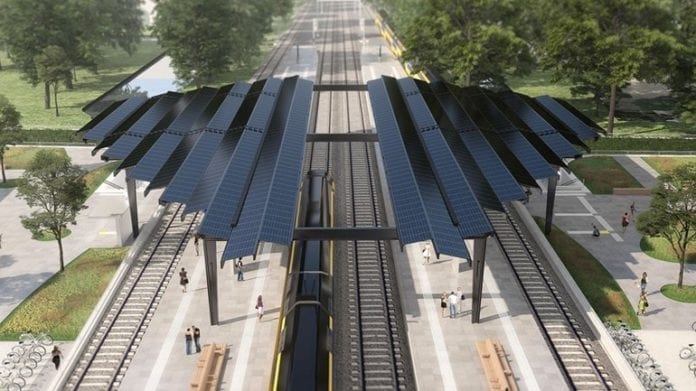 ProRail has seen the light! They have stated that burning through unclean energy at a massive rate “is no longer of this time”.

Innovation requires us all to be the change we want to see in the world. The municipality of Delft in cooperation with the Ministry of Infrastructure and Water Management will build the first energy-neutral train station in the Netherlands. This sort of positive change is a perfect example of long-term thinking and sustainable energy consumption.

“Everybody Loves The Sunshine” plays softly.

The Future of Transportation

This complete transformation into Delft Campus will make travel easier. The train from The Hague to Rotterdam is the busiest line and they intend to make eight more trains available every hour once Delft is upgraded.

Why is a new-ish station needed in Delft?

According to ProRail, Delft Zuid is a desolate, quiet and out of the way station with a limited number of facilities. It offers almost no shelter from rain and wind and those who want to get to the other side of the track have to climb a steep staircase. This makes it inaccessible and below standard for those with a disability.

Pro-Rail has been clear on the fact that their energy consumption in the past was too high. Now they are taking big leaps into the future of sustainable transport. State Secretary Van Veldhoven stated, “With the renovation and roofing of the station, we will kill two birds with one stone: passengers on the platform will no longer be rained out and the station will become completely energy-neutral through the roof, which will, in fact, become one large solar panel”.

When are the changes coming to Delft Zuid Station? (aka Delft Campus)

Prior to taking these steps to innovate the station, ProRail revealed that a station the size of Delft Zuid ran at “about two hundred Megawatt hours per year; as much as the energy consumption of seventy households”. The railway itself will grow from two lanes to four, it will also increase the number of trains from 20 to 28 per hour. The construction of the “Delft Campus” as the new version of Delft Zuid will be known, includes a tunnel and bike path.

Although this project will be completed in 2023 it will stand as an example for other stations looking to harness clean energy. The Dutch have innovated rooftops many times in the past, it is encouraging to see solar power incorporated more readily. As the saying goes “It does not matter how slow you move forward, as long as you keep moving forward”.

Cost of The Renewable Energy Upgrade

The cost of the roof will amount to 2.4 million euros. The municipality of Delft is responsible for 1.8 million euros and the rest is being settled by the national government.“The special thing is that there are no solar panels on it,” stated John Voppen of ProRail. “But the roof itself is made of only solar cells.” It generates much more power than usual sunroofs.

How do you feel about this new Dutch innovative idea of installing a solar roof on a train station? Let us know in the comments below!

Previous articleAfter a new takeaway? Albert Heijn will start delivering hot food straight to your door from tomorrow
Next articleAbandoned deer is ‘adopted’ by a group of cows in Hengelo and it’s so cute!

The Dutch start-up European Sleeper is introducing a night train that will take you from the Dutch capital via Rotterdam...
Read more