Things I wish Italians would learn from Dutchies (and vice versa!)

I definitely am a proud Italian. I brag about the etymology of words coming from the Latin language, scorn people (…are they even people?) who put pineapple on pizza, tell friends not to have a cappuccino after noon. But there are some things (many things) I acknowledge Italians are not so great at. And although complaining is a national sport both in the Netherlands and in Italy, I really think it would be a paradise country if we could combine the best habits of each!

Maybe you have heard something about a drought going on in Italy; it can be a dry country, especially in summer, and the arson problem doesn’t help. In addition, 20% of water on average (44% in Rome) goes wasted due to leaky pipes, which are difficult to repair without ruining ancient Roman streets. Lakes are therefore exploited, and some are retracting by dozens of meters/liters! This is not only an ecological problem, but it’s also bad for tourism.

The Netherlands is probably the most knowledgeable country in the world when it comes to water management. And while the problem here is rather keeping the water out of the land, instead of not having enough of it, it is no surprise that the leading companies worldwide for water desalination (making drinkable water from sea water) are Dutch. Many countries (Israel, California, Maldives, Emirates…) are resolving drought problems with this 21st-century solution, and I really hope Italy will follow too.

Ok, this is an easy one. I respect the Dutch cuisine (stamppot can be very comforting on a winter night) but there’s no doubt it would benefit from some Mediterranean tuning: less butter, more olive oil and no margarine (seriously, why is it still in use? How come the news of it being unhealthy didn’t make it all the way up here?)!

Also, I would add more variety: I understand the love Dutch people have for efficiency, hence the daily dose of broodje ham en/of kaas or weird beleg… but food can be something more than pure sustainment; it could be a moment of sharing and bonding, an escape from a boring workday! So please stop this sad habit, and have a happier, even though less efficient, lunch!

Being a flat country undoubtedly helps in having the highest rate of bike usage in Europe. This way, the Dutchies kill two birds with one stone: the pollution from car usage is low even in big cities, and they are one of the few countries in Europe where the obesity rate is decreasing!

While not all cities in Italy could apply the same transport policy, pushing for a more bike-friendly infrastructure would certainly improve the citizens’ life, especially in the outskirts where public transport is also not that helpful – just think that averagely Italians waste, per year, one day in traffic.

In this I wish Dutch people were a bit less north European and a bit more Mediterranean: shops closing at 6 p.m.? Almost nothing open on Sunday in loads of towns?? What the heck?! I get that salespeople also have a life, but seriously. The first days I was working here I thought I had to take a day off to buy some winter clothes and some pans.

Then I discovered the existence of the koopavond, and lately my city has been upgraded as a touristic city (meaning shops are allowed to be open on Sunday), so life turned out a little easier. But still, coming from a city where shops are open even on Christmas day till 10 p.m., this seemed like a major annoyance.

Hands down, we Italians like to make our lives difficult this way. Getting a social security number, a bank account, or even a sim card can be a nightmare. And to be honest I don’t know what the root of this problem is: not caring enough about efficiency or purposely making every process not clearly intelligible, so that there is room to wiggle it (and make it easy or not depending on the customer requesting the service).

Many foreigners complain about the Dutch healthcare system: it is quite expensive, preventive care doesn’t seem to be held in high regard, and you often get the feeling doctors don’t take you seriously unless you are past the point of being cured. (Also, they wish you good luck. Aren’t you supposed to treat me so I don’t need luck? smh.)

As it turns out, these feelings are not unjustified: the Netherlands has one of the highest costs in healthcare in Europe, but this doesn’t translate to better conditions. Italians spend, per capita, 2000 € less in healthcare compared to the Dutchies, but their health is considerably better in all of the factors considered. I don’t think this has anything to do with the competence of health professionals, which is probably higher in the Netherlands than in my home country; instead, I think it depends on the health management being operated as a business by private companies, while in Italy it is mostly governed by the state.

One good thing results from a “less attentive” health system, though: since the Dutch doctors are reluctant in prescribing anything stronger than a mild pain killer, antibiotic resistance in the Netherlands is practically non-existing.

Italy is still (unofficially) a Catholic colony, meaning that morally reprehensible (but nonetheless existing) activities, such as using recreational drugs and seeking the services of a hooker, are to be frowned upon and forgotten. Forgetting about a problem doesn’t make it disappear though; the result of not regulating these matters in a realistic way is that in Italy they are completely dominated and exploited by criminals and mafia.

While the Netherlands has its contradictions (the sale or the possession of small quantities of soft drugs is a criminal offence, but it is not enforced), the result of the toleration and regulation policy is that less criminal activity is linked to recreational drugs and prostitution, their use is safer for the customers and the government can make tax money on it, instead of increasing the wealth of criminal organizations. 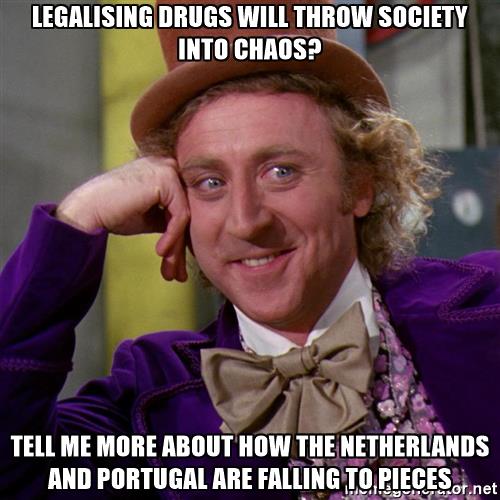