Don’t Come to the Netherlands! It’s a Trap! Are you planning to come to the Netherlands? Well, don’t.

Is it considered early for someone who has spent a month in the Netherlands to review the whole Dutch experience? Yes, probably, but I’m going to do it anyway. First impressions can be deceiving, but with a keen eye you can always get past the superficial in a couple of weeks and that’s precisely what I’ve done.

So, what’s the whole fuss over this country about? And why is it that people mindlessly fall in love with the Netherlands in just a few days? Well, there’s just something about the Netherlands, isn’t there? It’s not a secret though, we have heard it all: the beautiful canals, the museums, the friendly locals, the magnificent weather, and the list goes on.

But I think now is the time for an unbiased opinion, and a reminder to never judge a book by its cover. So, hold on to your nationalism, tie up your ego, and keep your Pandora’s box of xenophobia open, because we are about to count down the reasons you should NOT come to the Netherlands: We are not talking about the New York Upper West Side kind of foreigners. This is real talk, foreigners who do NOT speak English as a native language or at all! (Don’t you just hate that?) The Dutch might find them interesting, but is there anything truly interesting about a Syrian artist waiting several hours in line to get his painting displayed in an art gallery in Utrecht? Creepy!

Can someone please remove the word cuisine from the dictionary? It doesn’t even sound English! Why can’t people just eat normal food, like a proper meatloaf? Why is it always Asian or Mediterranean? No matter how small the Dutch town you are planning to visit is, chances are you will run across a Greek or a Chinese restaurant. It’s just ridiculous.

We get it, the Dutch love animals. A Dutch person living in the suburbs is likely to have up to four animals (excluding cats and dogs). Do you really want to feel bad about the amount of time you’ve spent figuring out ways to get rid of your daughter’s hamster? These people will rub it in your face. They introduce you to their ponies before introducing you to their spouses!

It’s awful, especially at this time of the year. If you think the Netherlands is the ideal place to binge watch and follow all the TV shows you have been skipping, think again! The sun here is up from 3 AM until 10 PM, so if you were thinking about spending more than a few hours on Netflix, think again! The time difference might even have deprived you of the great wisdom of The O’Reilly Factor (had the show not been cancelled).

The Dutch all simply have green thumbs, period! The people plant in sand for heaven’s sake! They utilize solar and wind energy! Three words: why the fuss? Has anyone ever died from eating supermarket greens over the homegrown variety? Have solar energy panels ever done any good to the planet rather than just sabotaging views from airplanes?

Don’t come to the Netherlands.

There! Now you have it, the cure to the brainwashing to which we all have been subjected. Still want to come to the Netherlands? Just stay away. Three tablespoons of COVFEFE after every meal will do just the trick.

Previous articleFlag Day (Vlaggetjesdag) is coming to Scheveningen again!
Next articleCoalition Governments: The UK vs The Netherlands 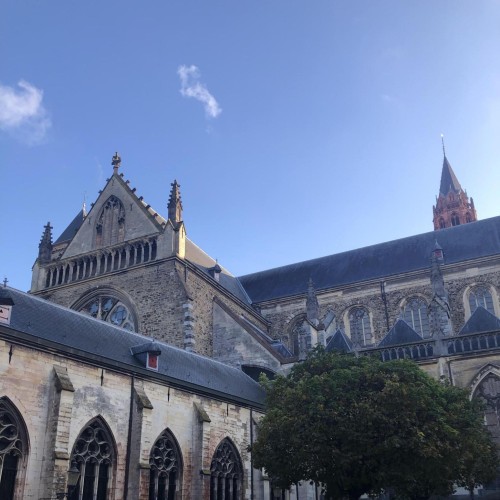