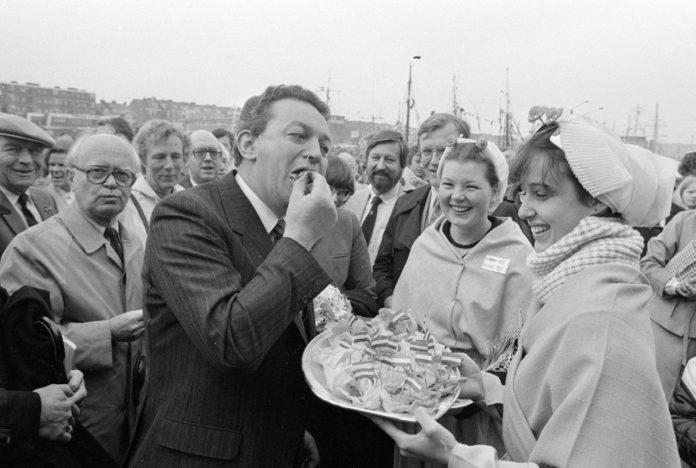 Never heard of Flag Day? I hadn’t either until I moved to the Netherlands. It’s not the biggest festival in the Netherlands (although, within between 150K and 200K visitors each year it is certainly not small) but if you’re in Scheveningen or you like herring, then it’s a pretty big deal. Flag Day, or Vlaggetjesdag, is the official heralding of the return of the New Dutch herring season. Of course, it’s ultimately much more than that.

A History of Herring

Based in Scheveningen, the historic roots of Flag Day lie with the famous Dutch herring. Originally the celebration occurred around the departure of herring ships out to sea, but since fishing techniques have changed, the festival simply celebrates the return of New Dutch herring. Although its history goes back as far as the 18th century, the modern iteration of the holiday in Scheveningen is a post-WWII event with the first edition dating back to 1947. Making the upcoming Flag day of this 17th of June the seventieth edition!

Flag Day aka Vlaggetjesdag: All about traditions

Although Flag Day is now also a commercial event and loads of the Dutch herring is actually caught by English vessels in front of the coasts of Denmark and Norway, Flag Day continues to be one of those very few day at which Dutch heritage is abundantly celebrated by traditional stuff. Think about it, we’ve got King’s day which is more about boozing in an orange shirt. And then there’s Sinterklaas and the cheese market in Alkmaar.  But apart from that? Not so much! So ‘Vlaggetjesdag’ (consider yourself truly a master in the Dutch language if you can pronounce that one perfectly) is a day full of folklore and nice old traditional Dutch stuff. Thereby making it one of these days not to be missed if you life in the Netherlands and are originally from abroad.

The festival consists of a wide variety of activities. Join in with Old Dutch children’s games for example . Plenty of well-known artists are performing. Go on board of traditional boats. There’s a mustache competition (!). Watch old crafts. Visit old fire engines. And of course chill on one of the many sun terraces. For a complete overview of all what there’s to do that day just click here (it’s in Dutch, but the pictures are a give-away 😉 )

Another highlight of it all is the first ever herringparty! It’s actually on the Friday the 16th before Flag day itself when on the end of the afternoon the ‘first bite’ will be performed as to kick off the herring-party. More info on that here.

And then there are some activities in the run-up to ‘Vlaggetjesdag’. So this week is for example also the time for ‘Graaitijd’. Graaitijd used to be the period that the ships would be well prepared for setting out to sea and catching that national fishy treasure. But now it’s more of a party week, with festivities being held in the Keizerstraat. More info is to be found here. (in Dutch)

Another highlight of Flag Day at Scheveningen, though peculiar enough not on Flag Day itsself, is the yearly herring auctioning of the year’s first barrel of herring.

The auction, which consists of a barrel holding approximately 45 herring, takes place a day before herring sales start in the rest of the nation (Wednesday!), and the money from its sale always goes to a charitable goal. This year the income from the Flag Day auction will go to the Make-A-Wish Foundation.

This edition, the barrel went to a group of young entrepreneurs from Veenendaal, who call themselves the ‘Gentlemen of the Fish’, as you can read here. The gentlemen paid €65,000 for the first fishy!
Last year the Sperwer Groep won the auction with a bid of €90.000, with proceeds going to Stichting Het Vergeten Kind. The record for a barrel stands at €95,000, paid up by by a staffing agency in 2012.

Curious to check it out for yourself? Or just want to eat some herring? Then make sure to visit the Scheveningen Harbour on Saturday, 17 June from 11:00 AM – 5:00 PM. And if the lure of herring isn’t enough, just know that it’s completely free to visit!

Previous article
Free Money?! – Living and working in Rotterdam might earn you 50 bucks
Next article
Don’t Come to the Netherlands! It’s a Trap!