There’s a huge number of services for this — but what’s rarely clear though, is how much these services cost. Banks are notorious for hidden charges and make it increasingly difficult for you to know exactly what fees and exchange rate you’ll have to pay. It’s not until you’ve sent it over that you realise the bank has taken a sizable chunk of it and you can’t get that back.

Luckily, there are options that cut traditional banks (and the hefty fees they charge!) out, while still safely transferring your money where it needs to be.

I’ve had a lot of experience over the past couple of years with international money transfers, as I am regularly switching between currencies. So let’s get onto the dreaded money transfer — and make it easy.

So you want to send money TO the Netherlands?

People transfer money all the time to the residing country. Maybe you have an overseas business? Or maybe you have savings tied up in your home country and want to access them. Transferring to the Netherlands is especially relevant if you are moving here and are moving thousands of dollars, yen, pesos, or any other currency over.

I’m going to use the UK as an example, as I’ve had personal experience with it. Here’s the real cost of fees when sending your money to the lovely Netherlands vs alternatives such as TransferWise. 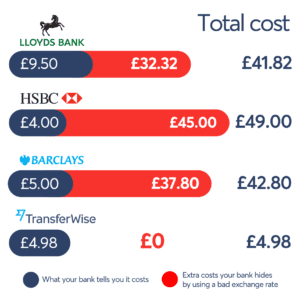 As you can see, it doesn’t look great. When I first moved to the Netherlands, my bank was charging me £25 every time I needed to send money over (+ taking even more money through their crappy exchange rate). It eventually went down to £10 (not naming any names COUGH Natwest), but it’s still wasted money that you needn’t spend.

So you want to send money FROM the Netherlands?

Sometimes if we have taxes and debts to pay in another country, we need to send money over to a foreign bank. Or maybe you want to have some international savings or just send a family member some money.

Initially, the bank may tell you the cost to transfer, however, there is nearly always an additional cost on top of this (in the small print or stated nowhere). On top of that sometimes the receiving bank (the bank you are transferring money into) can also charge you. As an example, this is what it would cost you to send money to the UK from a Dutch bank vs a company such as TransferWise. 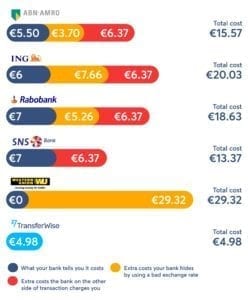 Crazy, right? Well, this is why you need to be keyed up on what you’re really spending when transferring money internationally.

If you want to avoid all the unexpected cost, then I recommend switching to a non-banking company. Like stated earlier, TransferWise provides you with a flat fee with NO added charges whatsoever. So what you see is what you get.

How does TransferWise work?

Before we get started: check that your currency is listed (it most likely is).

You’re probably wondering ‘well there are charges for a reason, where’s the catch?’ There is no catch. TransferWise uses a different system of money transfer than banks do. It uses a peer-to-peer system, meaning that no money technically crosses borders.

You are sending money to them and they are essentially giving that currency to someone who needs it and vice versa. Both individuals and businesses can use this service. This is why it is so cheap to do and it’s totally legitimate.

All TransferWise does is charge you the initial small fee and then convert it at their exchange rate, which is in line with the mid-market rate. This basically means it’s as close to the rate you see on the news each day as possible. It clearly displays it on their website, so you aren’t left in the dark about it.

I’ve personally used TransferWise a few times, especially when transferring larger sums of money (over €1,000). I’ve never any issues, and it’s also usually much faster than a bank transfer which is a bonus.

How do I get started?

Firstly you need to create a free account — and it’s worth noting that the recipient doesn’t need an account! Sometimes you may need to provide further verification, but don’t worry it doesn’t take long.

You then need to provide them with the recipient’s bank details, so they can send it over.

Now it’s time to pay via credit or debit card and send over the amount that you desire. And that’s it! Easy.

Still don’t get it how to send money to the Netherlands cheaply? Watch this for all the information you need:

Not into Transferwise for sending money to and from the Netherlands?

Not into Transerwise for whatever reason? No worries. We’ve also heard good things on HiFX. Also one of the new speedy, trustworthy and cheap parties online to help you with this. You’re well on your way…

Well, there you have it, you’ve found a new alternative to send money to the Netherlands cheaply. If you don’t believe us that it’s cheaper than the other competitors, then see for yourselves.

*If you transfer money from the Netherlands with Transferwise and use any of these links above, DutchReview makes a few cents for which we’ll buy much-needed cheese and stroopwafels.

Lost your job in the Netherlands? What you need to know about Dutch employment law [2022]