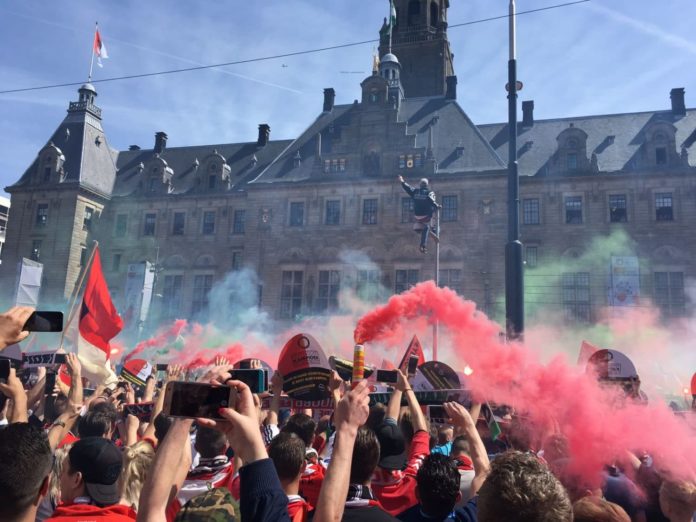 It’s been a crazy time since Sunday! Feyenoord are the 2017 champions of the Eredivisie after a resounding 3-1 win over Heracles Almelo on the final day. What appeared so certain a fortnight ago came under threat with a shock 3-0 defeat away at local rivals Excelsior on the penultimate match day which allowed Ajax to reduce the lead at the top to a single point. It wouldn’t be football without drama after all! The Rotterdammers managed to stave off Ajax’s late challenge to win their first title since 1999. How did they manage it?

After a semi-successful season last year, winning the KNVB Beker and finishing third, Feyenoord have managed to bridge the 19-point gap between themselves and 2016 champions PSV. The backroom staff at the club ensured that the squad has been strengthened with the signings of Nicolai Jorgenson, Brad Jones and the loan of Steven Berghuis from Watford. Additionally, the only notable sales were that of Lex Immers, who had previously spent time on loan at Cardiff, and Colin Kazim-Richards. The core of the squad was successfully retained.

This compared positively with previous transfer windows. Feyenoord, with their strong youth academy, had become something of a selling club. Previous manager Ronald Koeman had poached Graziano Pelle and Jordy Clasie whilst defensive stalwarts Stefan De Vrij and Bruno Martins Indi had also moved on. It appears financial stability has been achieved and the club managed to keep hold of its best youth players last summer. Rick Karsdorp, Terence Kongolo and Tonny Vilhena have continued their development and became key members of the title-winning team.

A huge reason for PSV’s lack of challenge this season has been their inability to convert their chances to the lament of manager Philip Cocu. Luuk de Jong, who plundered 26 goals last season, only managed 8. Comparatively, Jorgenson, Feyenoord’s summer signing from Kobenhavn, scored 21 to win the golden boot.

They weren’t overly reliant on the big Dane either. Dirk Kuyt scored 12 times and Jens Toornstra scored 14. As a team, Feyenoord only failed to find the net on 3 occasions – all away from home. They top scored with 83 whereas PSV only mustered 63; Ajax managed 78. At the other end, they also conceded the least with 19.

I could have used an old footballing cliché here: ‘bouncebackability’. Each time the team suffered a setback they recovered quickly and effectively. In late October and early November, the team’s form slipped. Draws to Ajax, Heerenveen and Utrecht were compounded by an embarrassing defeat away at Go Ahead Eagles – their first of the season. This was potentially down to the extra stress that competing in the Europa League had on the squad. Priorities were reassessed and it’s clear that the league became the focus. Manager Gio van Bronckhorst deserves credit here as the team went on to score 13 in the 3 games before the winter break including a 6-1 win over local rivals Sparta Rotterdam. Confidence was back and Feyenoord went on to win 7 on the bounce after the mid-season break.

Translated into English as ‘The Tub’, Feyenoord made their home ground a fortress this season. They failed to lose a single game and dropped only 4 points – that’s two draws! It is fitting that the title was won on the final day in front of the adoring crowd that had backed the team the whole way.

Flags in the team’s red and white and those in the green and white of the city of Rotterdam greeted Feyenoord as they walked out for the final game of the season. The atmosphere was electric!

Captain Dirk Kuyt was restored to the starting eleven. It was telling that he had been omitted from the starting eleven the previous week and the team had collapsed under the pressure. There was to be no mistake against Heracles – there couldn’t be.

The fairytale Eredivisie win was fittingly capped off with a hattrick from the captain; a veteran of the game and a man for the big occasion. As the final whistle went, Kuyt collapsed to the turf as emotion overcame him. He had managed what no other, including van Bronckhorst, had managed for 18 years and lead Feyenoord to an Eredivisie title.

If the team are to challenge successfully for the Eredivisie in the future lessons must be learned from this year. They cannot expect to keep selling their best players and remain successful; money must be spent wisely and on the right players; and, of course, youth players must be given opportunities.

Previous articleSharing economy of Amsterdam: Dutch capital makes it work
Next articleTime to teach you a new Dutch word! (#%& or better: ‘Verdorie’)