Bird watching in Amsterdam – how many birds can you see from your balcony?

Early this spring a new family moved into the Westerpark neighbourhood of Amsterdam. A pair of white storks made their nest on top of a disused chimney on the edge of the city park, right next to a busy railway overpass and an equally busy traffic intersection. The large birds spent weeks flying to and from the chimney, calmly collecting twigs to build their nest, in complete harmony with their new surroundings. It was a magnificent sight to see.

Apparently the white stork is a monogamous breeder and the pair uses the same nest for several years, so the new residents are here to stay for a while. (Well apart from long winter holidays in Africa of course). The stork family have joined the numerous grey herons that build their nests in the monumental Dutch elms around the Westerpark pond. There is plenty of food. Amsterdam’s canals and waterways are teeming with fish and it’s a common sight to see a heron standing in or near the water, motionless, waiting for its next meal to swim by. Or scuttle by…yes they eat rats too.

In fact everywhere you look in Amsterdam, you will encounter birds. The city is a paradise for waterfowl. Apart from the elaborate canals that Amsterdam is famous for, the city is traversed by two rivers, the IJ and the Amstel, and smaller waterways connect all these bodies of water with each other. 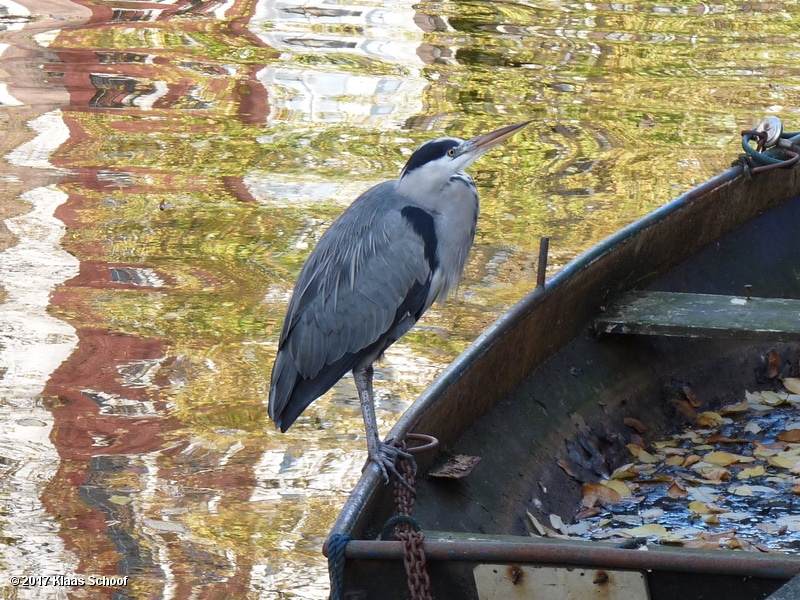 Before the city’s sewage system was completed in 1987, the water quality in the canals was nothing less than vile. To counteract the stench they had to be flushed through regularly. Until 1621 this process was achieved using the natural tides of the IJ, which was then still connected to the open water of the Zuiderzee. Later, after the construction of the Afsluitdijk dam, which cut the Zuiderzee off from the North Sea and turned it into the freshwater IJssel Lake, pumps were constructed to flush clean water through the locks.

Now however, with most of the 2500 house boats connected to the sewage system, strict controls on waste water discharge, regular rubbish collection and frequent dredging, the water is so clean you could swim in it.  (Note however that swimming remains prohibited, as the canals are officially boating lanes). The canals no longer need flushing and Amsterdam’s underwater world has been revived. A vast diversity of fish species, eels and even river lobsters thrive.

Nesting on the rooftops

The common gull, the black-headed gull, the lesser black-backed gull and the herring gull are among the many species of gull that feel at home in this watery urban environment. In winter especially, the gulls flock together, flying low over the rivers and canals, supplementing their fish diet with scavenged food scraps and bread that people throw into the canals. Recently a herring gull was tracked flying all the way from its nesting grounds on the island of Texel, 332 kilometers up the coast, to forage on tossed away French fries in the streets of Amsterdam.

Although naturally coastal inhabitants, many of the gull species have adapted to breeding in the cities. Great colonies of gulls survive on the outskirts of Amsterdam, nesting on gravel rooftops and sandy waste ground wherever they can find it, like on the artificial island of IJburg. These clever birds even use the inaccessible wasteland in between highway junctions as nesting grounds.

The gulls share the canals (and the bread) with a large population of ducks. With its metallic green head (the male), brown breast and blue purplish wings, the Mallard is a stunningly beautiful bird. It forages on water plants and invertebrates, but in the winter months it too will come rushing over, flapping wings and quacking loudly for your bread leftovers. Less pretty perhaps, but just as much part of the cityscape…the Muscovy duck. 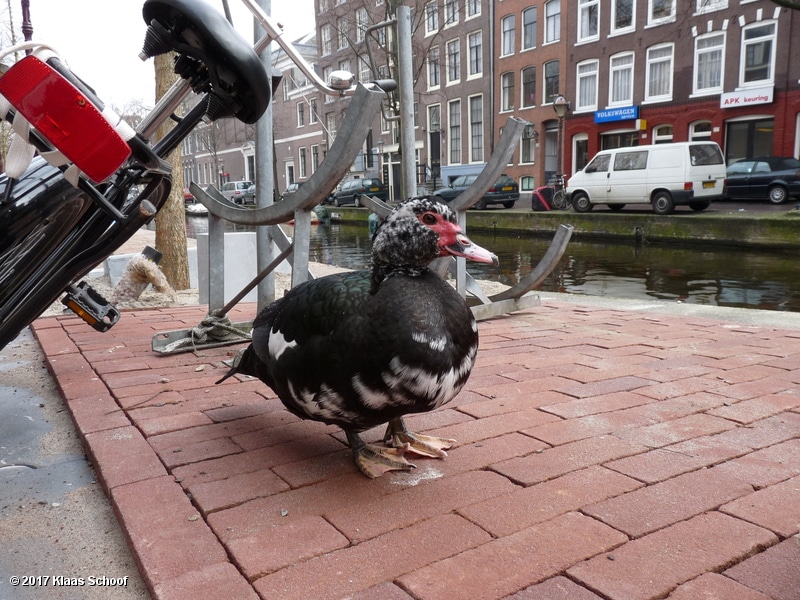 Another urban waterfowl that is indigenous to the city is the coot. This sooty-grey bird with its white bill and forehead is much smaller than the mallard, but twice as feisty. The coot builds its nest in the canals, tucked away around the houseboats, using whatever materials it can find. 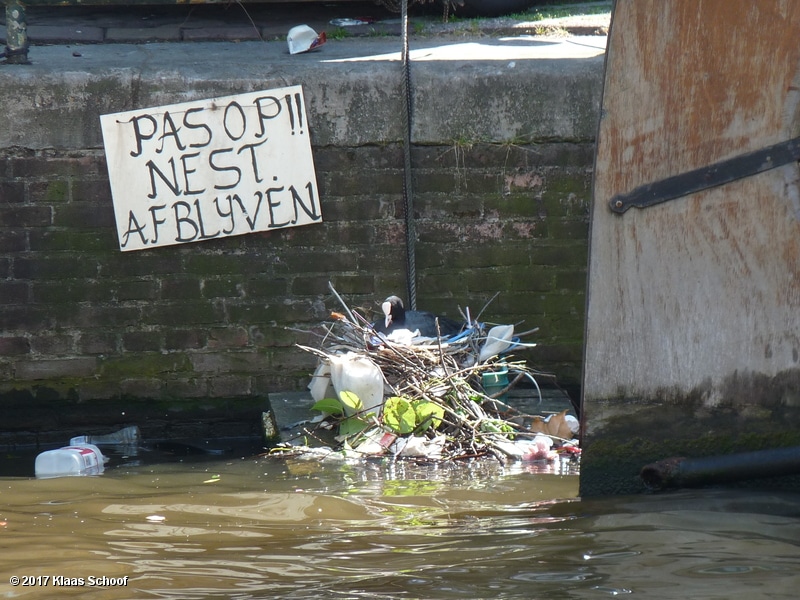 In springtime it is a common sight to see a brave little coot tugging a waterlogged plastic bag behind it, struggling to create a safe place to lay its eggs under the constant gaze of its human neighbours.

Swans are numerous in Amsterdam too, sailing along the canals in pairs, as are geese, waddling on the banks aggressively defending their pooped-under territory from anyone who dares come close, or moving along the water at great speed in noisily yapping flocks.

A relative newcomer to the city’s feathered population is the Egyptian goose. With its exotic ruddy plumage this large bird still looks a bit out of place here, but judging by the number of fluffy goslings I have seen navigating the Amsterdam canals behind their stoic parents this spring, it is here to stay. 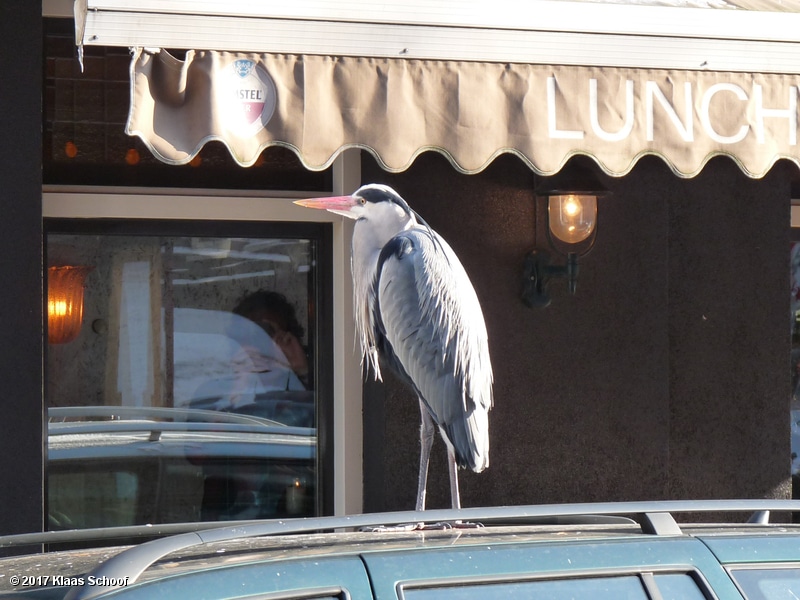 At times you’d really almost forget you live in a city. Like when a heron screeches like some ancient Jurassic creature as it swoops past you along the canal, or you watch a couple of grebes giving an elaborate courtship display before diving under the surface to chase a fish. Grebes have a sharp pointy beak and reddish head crest and can stay under water for an amazing length of time. Their lobed feet are positioned far back on their bodies, so they can swim really fast, but walking is not their thing. This anatomy has earned this beautiful bird the not so glamorous English name arsefoot. 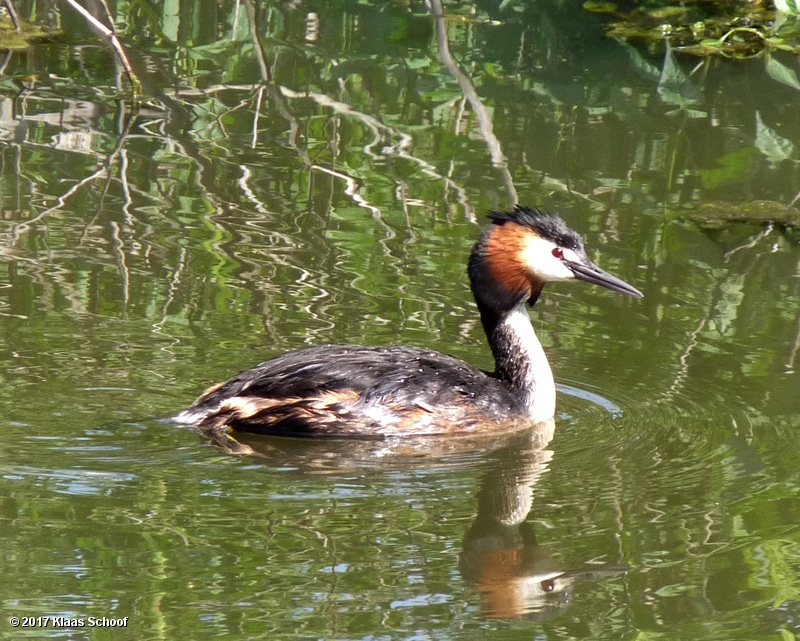 In the Amsterdam Houthavens and NDSM ports, cormorants spread their raggedy wings in the sun, and, if you are really lucky, you can even glimpse the blue flash of the kingfisher. 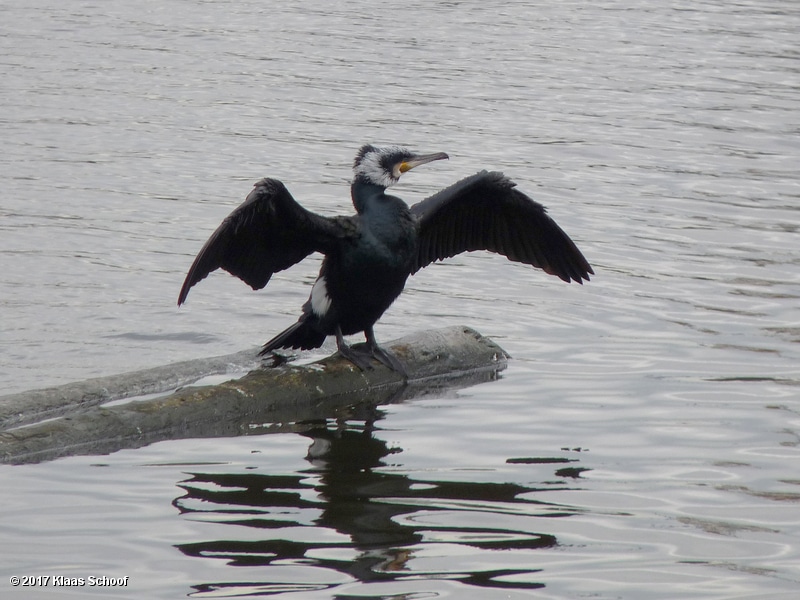 Amsterdam’s parks and gardens are also home to a great number of bird species. Every year the Dutch Foundation for Bird Protection holds a national bird counting event. Participants are asked to report how many of which birds they see in their garden or from their balcony in a half hour time-span on one of two specific days in January. At the last count 158,386 house sparrows were spotted, making this species the most common by far in the Netherlands. There were 97,168 great tits and 95,527 black birds, followed by the jackdaw, the blue tit, the finch, the Eurasian collared dove, the wood-pigeon, the starling and the robin.

These are the national averages. Of course there are big differences between the countryside and the city. My back garden in Amsterdam is ruled by magpies. 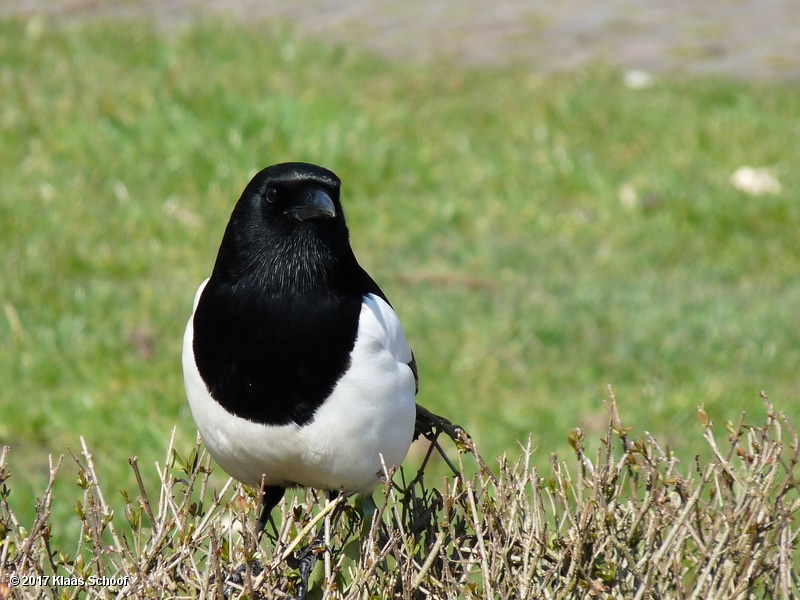 These playful, highly intelligent black and white orca’s of the sky sweep and duck from branch to balcony in little groups of two or three, chattering and burbling to each other in their exceptionally sophisticated language. They are territorial and very aggressive to other birds, like the pair of wood pigeons that tried to build a nest in one of the trees. One of them got pecked to death, the other only just escaped, leaving a trail of tail feathers across the garden.

We also see lots of great tits in our garden, distinctive little birds with a black head and neck, prominent white cheeks, olive upperparts and yellow underparts. They flit from tree to tree chasing small flying insects. At dusk they are replaced by little bats that nest in the masonry of the building.

We have also ‘spotted’ a great spotted woodpecker in our garden on a few occasions, probably visiting from the nearby park. And of course the soothing cooing of pigeons is as familiar a sound as the tingle of the tram as it stops at the top of the road.

All over Amsterdam magpies, crows and jackdaws squabble in the treetops, blackbirds rustle in the hedges, and in the city parks great flocks of green ring-necked parakeet fly shrieking from tree to tree.

These exotic birds have become common city dwellers, profiting from the warmer temperatures of the concrete jungle, nesting in hollow trees in the parks and feeding off berries, seeds and flowers.

In autumn the skies of Amsterdam are graced by the intriguing changing shapes of thousands of common starlings flocking together and getting ready to roost. This natural phenomenon is called a murmuration. The common starling is an incredibly pretty bird with its iridescent plumage shimmering in shades of dark green and brown. They have a beautiful song too and are very clever at mimicking other birds. They have even been known to imitate man-made environmental sounds, like phones and cars.

And don’t forget the bobbing heads of the pigeons scuttling around your feet as you eat your sandwich in the park – that’s wildlife too, right? 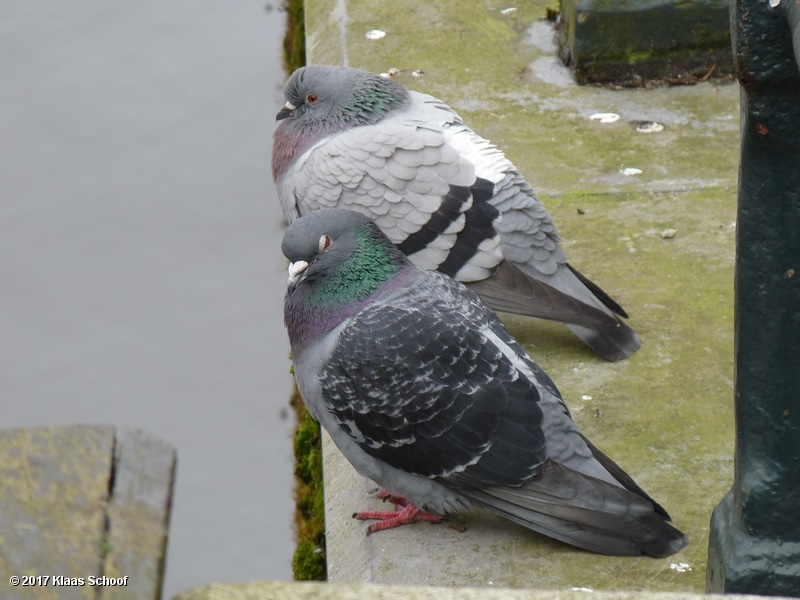 Have I missed out any bird species? Please share your bird anecdotes with us! How many different birds can you spot on any given day from your city balcony or in your garden?

Credit: All images published with this article were taken by Klaas Schoof in Amsterdam (2017). You can see more of his work at www.klaasschoof.com

Previous article
How to Visit the Van Gogh Museum Like a Pro
Next article
PhD in the Netherlands: the good, the bad and the mooi

Nellie Werner
Nellie is a bilingual English/Dutch-speaker with a B.A. in Translation, living and working in Amsterdam.