Are you wondering what’s up with all that yellow, blue and red you see when wandering through Dutch cities? Or what is this weird ‘Stijl’ word? (sorry for that ‘ij’ – we know it’s hard) No worries, don’t be afraid of the Red, Yellow and Blue – it’s an artstyle and it’s celebrating its 100th birthday. So let’s tell you a little bit more about ‘De Stijl’ and why you definitely want to visit Amersfoort to celebrate this artsy birthday to its fullest.

Somewhere in 1917 a Dutch artist with the name Theo van Doesburg started the artistic movement ‘De Stijl’, a movement that would revolutionize the whole concept of modern art. From our featured pic you’ll get an idea of what De Stijl was all about – but mind you this was a time way before computers, digital design or even that nice futurism of the 50’s.

Back in 1917 the Netherlands was a neutral country in WW1, peaceful but the raging war kept all Dutch artists locked into simple old Holland instead of say, the mundial Paris. Making the most of this the painter Theo van Doesburg rallied other artists and founded ‘De Stijl’ (this word is borrowed from the German ‘Stil’). In general, De Stijl proposed ultimate simplicity and abstraction, both in architecture and painting, by using only straight horizontal and vertical lines and rectangular forms. Furthermore, their color-vocabulary was limited to the primary colours, red, yellow, and blue, and the three primary values, black, white, and grey.

Of course, most of you know of De Stijl because of the work of two Dutch artists. Gerrit Rietveld and of course Piet Mondriaan.

Painter Piet Mondriaan’s bold blocks of primary color, boxed off by straight black lines, laid the foundations of abstract art (and still pop up on everything from coffee mugs to shirts). Gerrit Rietveld’s famous red and blue wooden chair really does live up to that much-used label ‘iconic’, as a centerpiece of modern design.

De Stijl wasn’t confined only to painting: interior design, typography, graphic art and architecture were all transformed by this Dutch artistic movement. (Gerrit Rietveld is just as well known for his buildings as his furniture.) De Stijl had a major influence on modern art through the 20th century, and is still deeply rooted in Dutch design.

Amersfoort: The birthplace of Mondriaan

The most well-known artist of De Stijl, Piet Mondriaan, was born in the beautiful city of Amersfoort. So it’s no surprise that this city goes all out during the De Stijl Centennial.

If there weren’t already plenty of reasons to visit Amersfoort, here are a couple of De Stijl-related hotspots:

A visit to Mondriaan’s birth house means virtually traveling after this master of abstract art, he lived all over the world – so there’s Amersfoort and Winterswijk, Amsterdam – Paris – London with an ending in New York. You’ll discover his iconic work, thought processes, interests and his ever changing style. With the use of some very impressive audio-visual techniques you’ll really feel immersed in the man’s psyche and work.

There’s also a do-it-yourself part, where you’ll get the chance to discover the Mondriaan in yourself. There’s also Mondriana, a mini-exhibition where it is shown just how influential De Stijl and Mondriaan were when it came to design. All in all it’s a must-visit for anybody that likes art (or pretty things in general)

If there’s a Mondriaan House then there’s a Rietveld Pavillion!

The characteristic Rietveld Pavilion in Amersfoort will be the setting of the exhibition ‘Beyond The Stijl. Gerrit Rietveld and the 1950s’ that is initiated by FASadE. The Rietveld Pavilion is a true icon in The Netherlands, being the first art hall in the country. The pavilion built in 1959 is one of the most important works of architect Gerrit Rietveld. It is an interesting example of the functionalist architecture of the Interbellum, known in the Netherlands as Nieuwe Zakelijkheid (Neue Sachlichkeit in German, New Businessmentality in Engish, but it doesn’t translate that nicely). 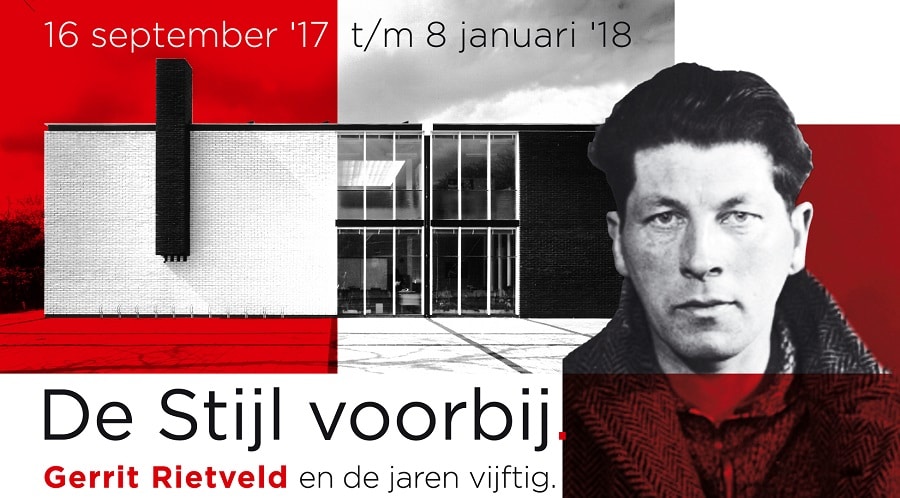 The focus of the exhibition is on the turbulent, post- war 1950s. Designs that Rietveld made in this decade are at the epicenter of the exhibition: the three pavilions (the Rietveld Pavilion in Amersfoort, Venice and Sonsbeek), the Amersfoort chair and other designs. The Zeitgeist back then was full of innovation but showed some tension as well.

A new building is popping up in Amersfoort, inspired by three former pavilions designed by Gerrit Rietveld (Amersfoort, Otterlo and Venice). With new techniques materials, inspiring young artists and designers form a contemporary pavilion inspired by all those things we’ve come to know (and love) from De Stijl. The pavilion is used for art-exhibitions, that’s to be expected – but also music and theater. It’s open till October!

And these three hotspots are just the tip of the iceberg, there are plenty of other things going on with Amersfoort and De Stijl. Check out these walks, cycling tours, art exhibitions in Amersfoort and Utrecht and in September there’s another Rietveld-pavilion opening up in Amersfoort! You can even stay in Mondriaan styled rooms at Hotel De Tabaksplant.

So enjoy Amersfoort and De Stijl, feel free to share your pics and tips with us!

Previous articleSummer of 2017 is Not Over Yet! 8 Concerts to Go Before Fall Really Kicks In
Next articleThree weird Dutch food ‘Things’ that will make you cry/laugh

In Hilversum, a city close to Amsterdam, volunteers have started to organise cycling lessons so that Ukrainian refugee children can...