The mainland of the Netherlands sure is beautiful, but sometimes you just need a little escape, even if only for a weekend. Without going too far and spending too much, you can have a relaxing (or adventurous) weekend in one of the Dutch Wadden Sea Islands: Texel, Vlieland, Terschelling, Ameland and Schiermonnikoog.

Here I will give you some tips on “the prettiest place in the Netherlands” (as voted by the Dutch people), Schiermonnikoog!

Province: Friesland, but you can reach it with a ferry departing from Lauwersoog (in the province of Groningen). It is the smallest and easternmost inhabited island of the Wadden Sea Islands.

Population: less than 900 people live permanently on the island, making it the least populated and least densely populated municipality of the Netherlands. But beware: in the summer months it can get pretty busy with all the tourists!

Transport: only 200 inhabitants chose to get a special permission to be allowed a car, hence most of the people (and all of the tourists) travel by bike. The ferry to and from the island takes about 45 minutes, and there are 4-5 rides per day.

A bit of history: the island’s first known owners were monks, that also gave the island its name: schier refers to their gray robes, monnik means monk and oog stands for island. After the monasteries were dissolved during the Reformation, the island became property of the States of Friesland and then private property of several Dutch and German wealthy families. During WW2 the island was occupied by German troops, which were then forced to surrender by the Canadians: on 11 June 1945 the island became the last part of Europe to be liberated from Axis occupation by the Allies. The island was turned into a national park in 1989.

“De Schiere monnik” is still in the island’s coat of arms. Source: Wikipedia

If you don’t have troubles with sharing a tight space, having little to no privacy and getting bitten by supersized mosquitoes, then you are definitely camping material! Jokes aside, camping is one of the favorite activities of the Dutch people on vacation, so if you want to feel like a local you should give it a try: since it is so popular, the camping sites are usually well organized and clean (but not always cheap). The biggest camping site in Schiermonnikoog is Seedune, comfortably located between the dorp (village) and the stretches of forests and beaches. Although the facilities are comfortable enough, I would advise bringing an emergency battery pack for your phone, since the charging system (a safe – for which you have to rent a lock – located at the entrance of the camp) is quite annoying. 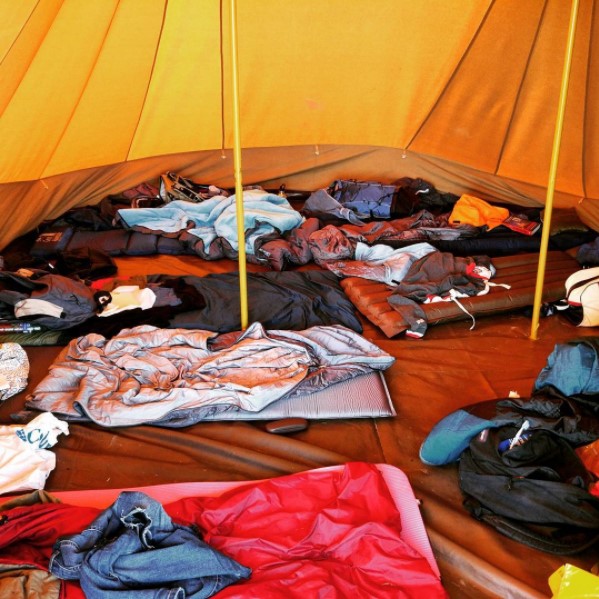 You can’t say you know your roommates until you can tell one from the other simply by their snoring. Source: Aurora Signorazzi

If instead, you are looking for a more luxurious experience than the “back to basics” charms of camping, the island has plenty of boutique hotels in the village and by the beaches. Just be sure to plan well ahead, since finding a room last minute can be difficult or very, very expensive.

Schiermonnikoog: To see and to do

The first thing that strikes you once landing in Schiermonnikoog is its relaxed atmosphere: you immediately get that holiday feeling, while not having to go abroad. The village, also called Schiermonnikoog, has several restaurants (try the mosselen), pubs (my favorite are It Aude Beuthus and Tox Bar), markets and shops. If you forgot to bring a book, check out the cute second-hand bookstore just opposite the Tox Bar, in Reeweg.

Something I really enjoyed in Schiermonnikoog is its non-flatness: a place where you can make use of all your bike gears, finally! While you shouldn’t expect mountains, the hills and dunes offer a variety in the landscape that is often missing in the mainland. The best way to explore the island is by bike, which you can bring on the ferry or rent on-site. Another difference with the mainland is the relative wilderness: the forests are not planted and well groomed – you are not going to experience that disappointing feeling of seeing the trees all nicely lined!

The beaches in Schiermonnikoog are also really pretty: fine, light-yellow sand and clear – and not too cold – waters. If the weather allows it (after all, we are still in the Netherlands), a few hours of sunbathing can boost your mood and replenish your vitamin D reserves. Depending on the time of the day, the tides can make this the broadest beach in Europe (seriously, are we there yet??)! 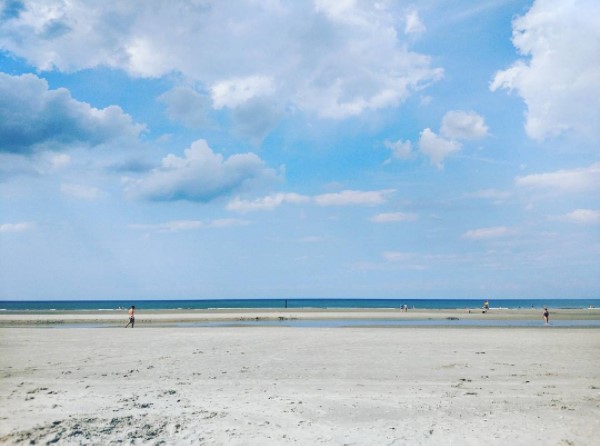 Isn’t it just like the Caribbean?! (No, it is not; but that’s as close as it gets)
Source: Aurora Signorazzi

And speaking of tides, a very cool (but also very dirty) experience is wadloopen: you can reach the island, during low tide, by walking in the mud (I know, I know… weird dutch fun).
Although this sounds like a very strange activity, it can be interesting and challenging (and you may also spot some seals from the Zeehondencentrum Pieterburen!), but you need to have some previous wadloopen experience since it takes more than 5 hours and some stamina.

A less tiring, but very fun activity you can do on the island is blokarting: you are basically on a kart with a sail, fueled by wind. Go with a group of friends, wear a jacket and be ready to be covered in sand while trying to stand on two wheels without flipping! And since the wind is never really missing on these beaches, this place is perfect for wind and kite surfing.

If the wind stops, however, you might need a little bit of help… Source: Aurora Signorazzi

For all the other activities and to better organize your visit, check VVV Schiermonnikoog!
(And if you do decide to go, bring some DEET. You can thank me later.)

Previous articleThree weird Dutch food ‘Things’ that will make you cry/laugh
Next articleUltimate guide to Schiphol: 10 Tips and Tricks for surviving Schiphol