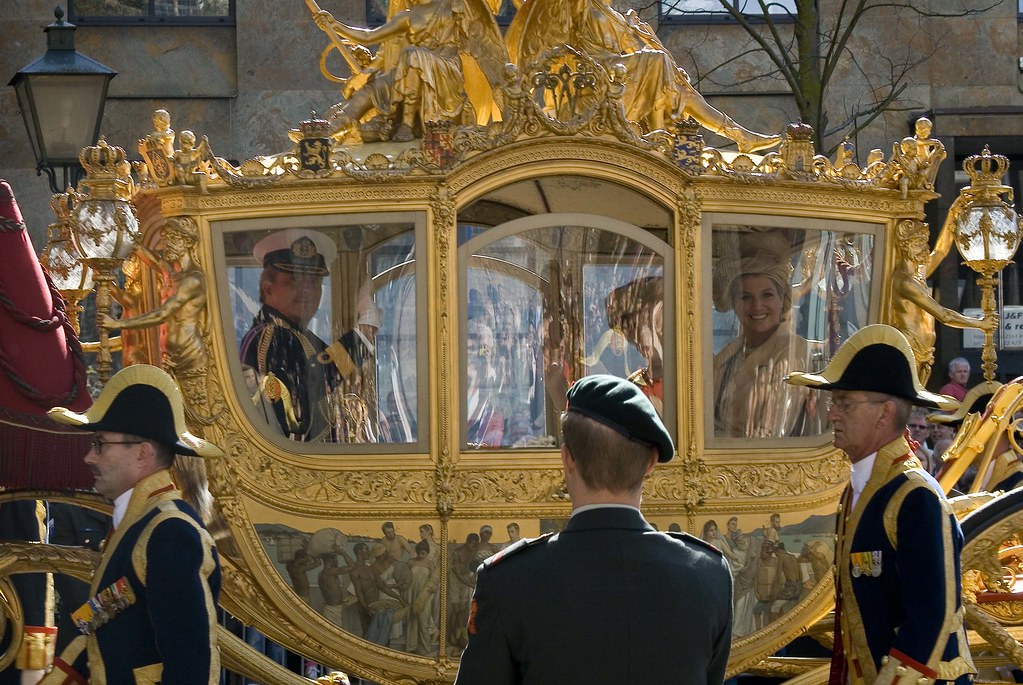 The Golden carriage in which the King makes his annual appearance will now go on display in the Amsterdam Museum. Some believe it should remain as an artefact and no longer be used due to its controversial history.

While it is uncertain whether or not the carriage will be used following its exhibition, there are many arguments for why it should be retired. Not least of which is the argument that it contains racist imagery.

There has been much discussion over one particular panel on the carriage. “Tribute to the Colonies” is a painted panel depicting a white woman seated on a throne being served by dark-skinned people.

The panel suggests that these people are slaves as they are poorly-clothed and carry goods which are then laid out at the woman’s feet. Viewed in this way, “Tribute to the Colonies” appears to endorse and even pay tribute to the enslavement of colonised peoples.

King Willem-Alexander has argued that the panel “is part of the Dutch cultural heritage” and should not be removed.

Racism in the Netherlands has become a serious topic of discussion in recent years. The push to remove contemporary racist discourse from Dutch culture has seen small victories, such as the recent banning of Zwarte Piet imagery from online platforms like Facebook.

To add to the controversy, the cushions within the carriage were embroidered by orphans from the Amsterdam Burgerweeshuis, which is now the Amsterdam Museum.

An artefact or a carriage

Another argument for why the carriage should no longer be used is that it is more of an artefact than a working vehicle at this point. The Royal House reporter Kysia Hekster, has told NPO Radio 1 that the carriage costs millions to restore and should not be paraded out in the open, “it is an art object that is being restored for millions. Should we drive it through the rain?”

On top of this, she has pointed out that given the controversy surrounding the carriage, anyone could easily damage it in protest. “Besides, it is controversial. Only one person needs to think of it to throw a can of paint on it and the restoration is undone.”

A decision regarding whether or not the carriage will be used again has yet to be made.

The carriage will be exhibited in a glass case within the courtyard of the Amsterdam Museum with six rooms dedicated to its history. Included in this history, will be a section on colonialism. The museum will also run a public program this Autumn in which participants can discuss the panel and its history.

Will you be sad to say goodbye to the Golden Carriage? Follow DutchReview on Facebook for the latest news and updates.