Mysterious boulder found on Dutch road: what is it? and where did it come from? 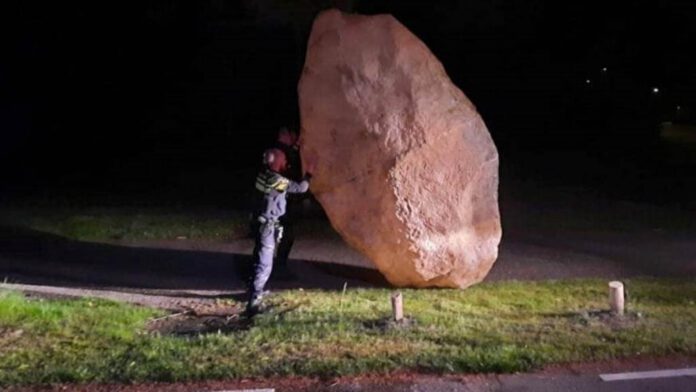 Last night, police officers in Zeist received a report that a two by four meter boulder had been discovered on the road in Oranje Nassaulaan in Zeist. Well, at least they thought it was a boulder.

After the dispatch center for Police Central Netherlands received the unusual report, the police investigated, and sure enough — there it was! A massive boulder right on the cycle path.

Despite its huge size, the “boulder” wasn’t actually that heavy, reports RTL Nieuws. It was temporarily moved onto the cycle path by the person who made the report — meaning it was either a fake boulder, or that was one very ticked off motorist.

The police are still unsure where the boulder came from and who may have put it there. There is speculation that it may have been a prank or a drunken action.

One for the Insta

However, the police enjoyed the humour and took a moment to show off their super-human strength by posing with the giant “rock.”

Reporting the story, the police even took to Instagram, joking “did someone lose something?”

Do you know anything about this mysterious boulder? Tell us in the comments below!

Previous article
12 realisations every expat in the Netherlands can relate to
Next article
Vienna to Amsterdam: the Netherlands welcomes the first night train from Austria today

Jen Lorimer 🇿🇼
An avid tea drinker, Jen was born and raised in Zimbabwe. She moved to Utrecht in 2017 to pursue her history degree. She loves people-watching, canoeing the Utrecht canals, and observing how the Dutch come alive in summer. Having been traumatised by a Dutch circle party, Jen wants to help equip other internationals with tips and tricks to survive and thrive in this wonderful flat country.