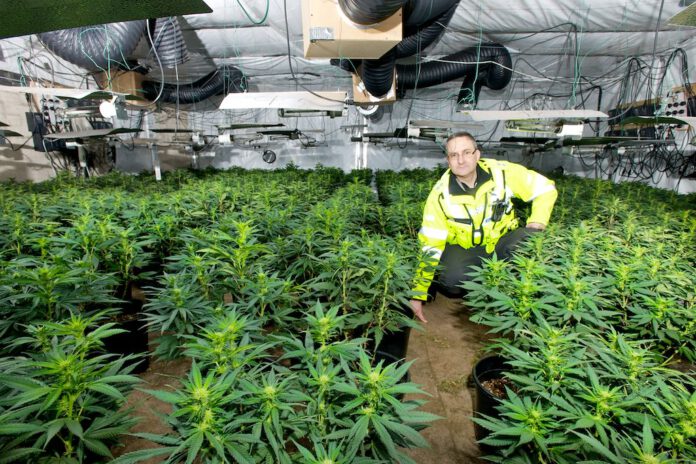 Northern provinces are becoming Netherlands’ drug farm. The poorest provinces in the country are becoming the targets of drug criminals; poverty, empty households and space in the rural areas of Groningen, Friesland, Overijssel and North Holland provide the perfect conditions for hemp crimes to spread. Here is everything you need to know about this issue!

In a recent police operation, a cannabis plantation of about 6000 plants was found in Foxhol, Groningen, in an empty factory building. In addition to Foxhol, there were raids in Burgum (Groningen), Leeuwarden (Friesland), Julianadorp, Den Helder (North Holland) and Dedemsvaart (Overijssel). According to the police, six people were arrested. As you can see from the map above, these are among the poorest regional areas in the country.

A large, officially inactive building with a high power consumption was a strong indication that something fishy was happening.

“Criminal organizations are looking for space and sheds, and Groningen is extremely suitable for this, as factory buildings are being converted and there are hundreds or thousands of plants there”, says lawyer Maartje Schaap. The catch in Foxhol was certainly a big success, but to put a dent in the hemp farm business the police would have to roll up 3 or 4 farms per week only in the province of Groningen, says Rein Munniksma, acting mayor of the municipality of Groningen.

Farmers in need of money in the impoverished countryside are easy prey for drug criminals. A phenomenon that started out in Brabant and spread to the east, so much so that in the past 6 months the police has found 20 hemp nurseries in Midden-Groningen alone.

From up close, it is easy to see how incoherent the drug laws on weed production and consumption are: the use and sale of marijuana are not prosecuted, but production is nearly always punished. Inevitably the question pops up: where are coffee shops supposed to get the weed from, then?

In February last year, the Lower House started taking baby steps towards regulation of cannabis cultivation, by passing a bill that stipulates that professional growers who adhere to certain conditions can get an exemption and are not punishable. Later, in October, the new cabinet gave the green light to a trial where “government cannabis” is cultivated nationally and then distributed among six to ten municipalities. This test will establish whether legal cultivation will decrease crime and the weed will contain fewer harmful substances.

A government-regulated weed production would allow coffee shops to legally purchase the product that they are tolerated to sell, and would also help impoverished farmers that are now exploited by criminal organizations.

What do you think of the drug policy in the Netherlands? Let us know in the comments!

Previous articleMH17 is 4 years ago today and Trump just sold the Netherlands down the river
Next articleThe Rembrandt Experience: discover the life of a Young Rembrandt in Leiden

A Dutch village called Velp experienced one of the most bizarre crime stories on Saturday. And, yes, we're including that...