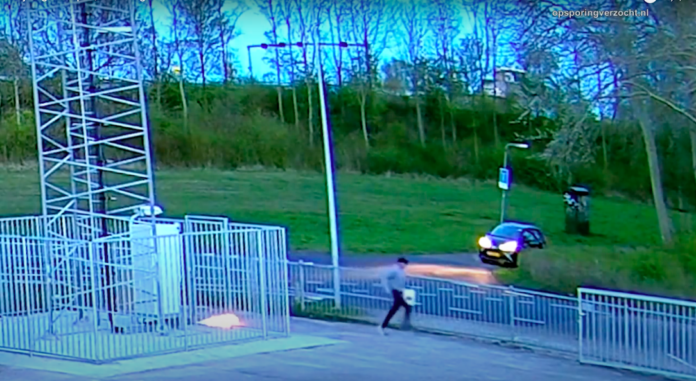 A video has been released of the man who set fire to a radio tower in Groningen last Friday. There have been a series of these arson attacks on radio towers, though it is not clear if this particular man is responsible for any of the others, NOS reports.

Over the past two weeks, thirteen radio towers have been set on fire by arsonists. There is a possibility that this is connected with the recent controversy over the introduction of 5G to the Netherlands.

5G controversy increased as a result of coronavirus

The controversy around 5G has only increased in recent months, as some activists claim that there is a connection between it and coronavirus. There is no scientific evidence for this; nor is there any for the idea that 5G causes health problems in general. The police don’t yet know if the recent radio tower arson attacks are connected to each other, or to the movement against 5G, but do consider both as a possibility.

Fires were lit in the same way

The arson attacks were all carried out in the same way as this most recent one, police report in a statement to Opsporing Verzocht: “It seems that the fires are lit in the same way as in Groningen. A flammable substance, often petrol, is poured over it and set on fire.”

5G groups emphatically distance themselves from arsonist: “this makes no sense”

Groups who have organised against 5G, such as ‘5G Den Haag’ and ‘5G, Het Gooi zegt Nee’, have expressed their condemnation of these arson attacks. “We have no idea who is behind these fires, but this makes no sense and we distance ourselves from this. We are very disappointed by this and it harms us,” says Georgette Polderman from the group “5G Den Haag”.

Considerable danger to the arsonist and the fire brigade

Police warn that there is considerable danger to the perpetrator(s) of this type of arson. “There is a lot of volts on the power cables that run there. So you can easily be electrocuted. Therefore it is also very dangerous for the fire brigade.”

It is not only the fire brigade that is at risk as a result of these arson attacks: they really couldn’t come at a worse time for ambulances. If a radio tower is out of action, emergency services can be uncontactable. In the times of coronavirus, emergency workers are under enough strain as it is, without having to worry that either people won’t be able to call them in an emergency, or they will have to go out of contact with the operator when they go to help someone in need.

The police are asking people with information to come forward

The man shown in the video is white, about 190cm, and looks to be between 20 and 30 years of age. The car he used to commit the crime was a black or blue Toyota Aygo, a model from 2014.

The police have asked anyone who may know this individual to come forward, as well as anyone who has noticed anything suspicious that might be connected to the thirteen arson attacks over the last two weeks as well.

Previous articleInnovative Delft students create ventilator design in just three weeks
Next articleSunnier days ahead, with temperatures at 15 degrees or above