Striking in the Netherlands: Why don’t the Dutch have more strikes? 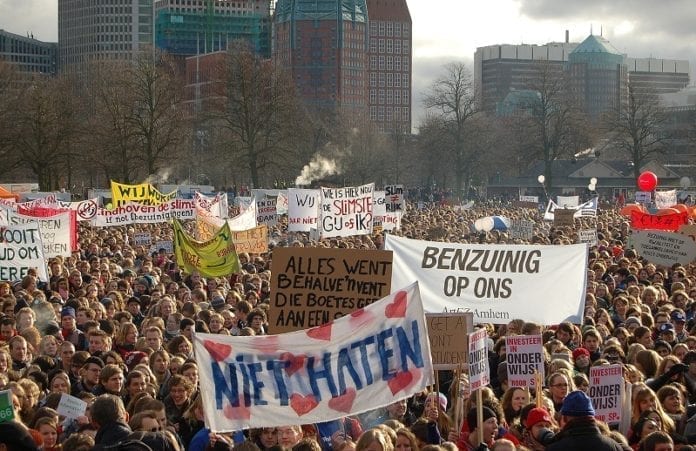 Striking in the Netherlands:

The Dutch are striking more than ever (but not THAT much)

2017 was the largest year for striking in the Netherlands since 1989. According to the latest figures from the CBS (Central Bureau for Statistics), in 2017 32 strikes took place, with almost 150,000 employees taking part in them (most of these within transport and teaching). Most were also had to do with working conditions and just some about low- or unfair pay. But does that mean that the Netherlands now strikes a lot? Not really, the Netherlands doesn’t strike half as much as their neighbouring countries, let alone France and Belgium, something which we’ll touch on in a minute.

However, saying that, there has been a big increase of working days ‘lost’ to strikes this year, in comparison to last year. Last year on 19,000 were lost, in comparison to 306,000 this year. These strikes ranged from the transport industry (don’t we know it), to teaching, supermarkets and casinos. Teachers were the most dissatisfied this year, as they felt that their salaries were too low (which is actually an issue that has arisen in a lot of other neighbouring countries).

Striking in the Netherlands: Comparisons

While it may appear that the Netherlands is well on their way to being a striking nation, you only have to look at some comparisons to realize that they’ve got a long way to go to earn that title. According to the Institut der Deutschen Wirtschaft (2017), both Belgium and France have around 79 – 123 strike days per 1,000 employees, per year. This is in comparison to the Netherlands, which has only 8 strike days.

If you look closely, although the Netherlands had a lot of strike days, the number of strikes themselves is pretty consistent with previous years. This means, that the strikes that did go ahead (especially within teaching) made the biggest impact overall.

But why aren’t they striking?

Well, if you strike without a trade union in the Netherlands, then you run the risk of being sacked. This is less apparent within a trade union. Seeing as lots of businesses run without a trade union – especially within freelance industries, then strikes are less common. This is a possible reason as to why the Dutch appear to be striking less freely than everyone else.

But for the main reason, one has to look at Dutch culture. Where France has a culture of confrontation the Dutch are always about seeking consensus – they even have a word for it; the poldermodel! So often workers, companies and the government negotiate for a long time to reach a compromised solution without a strike ever occurring.

Have you ever participated in a strike in the Netherlands? Let us know in the comments!

Vaccinations of people under the age of 60 with the AstraZeneca vaccine will not be resumed in the Netherlands for...
Read more