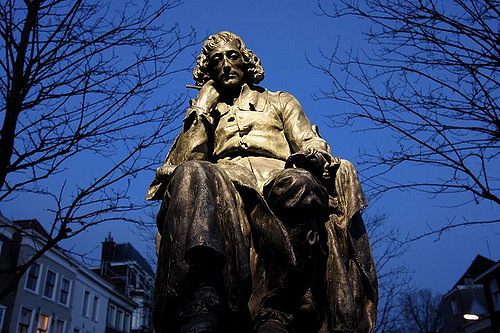 History can be used and abused for many things. History is useful to understand yourself and try to understand others. That’s why we tell ourselves and each other stories that we consider true. These stories must be critically investigated on its veracity to avoid that these stories are being abused to discriminate others, to suppress their histories, to seize their lands or to murder them. Therefore historical knowledge is very important in anyone’s nutrition and should have an important role in the curricula of primary and high schools, but that’s not what’s going to happen when the report of OnsOnderwijs2032 about the future of Dutch education is fully implemented by the responsible State Secretary.

This important report suggests that there won’t be a separate history class anymore in the future and that the lessons of history will be implemented in other classes. It seems like our education, our children and our future are getting in the wrong direction, which makes the abuse of history in the future more likely. One famous example of that was the reference to the ‘VOC-mentality’ in 2006 by our former Prime Minister, Jan Peter Balkenende, which he used to subscribe the value of our trading and pioneering spirit as one of the most important corner stones of the Dutch identity. In this article I’d like to take a look at four of such corner stones that construct the Dutch identity and briefly show you the importance of having some historical knowledge to see to what extent the histories of these elements are true or mythical and are therefore more likely to be abused for all kinds of reasons. Let’s take a critical look at 1) our polder model, 2) our tolerance, 3) our trading spirit and our Calvinism, before no one will have a clue of where these Dutch elements came from and how they became one of the corner stones of a Dutch identity.

Balkenende and the VOC mentality 2006

The Polder Model is a term that was only invented in the 1990s. It describes a meeting model aimed at consensus and harmony which is defined by the lifelong struggle of the Dutch with the element of water in a land that lies partly below sea-level. The enthusiasm for the polder model was actually initiated abroad. In 1994 there were several articles written in the USA in which the Dutch combination of unemployment care and job creation was admired by the Americans. It was only in the second half of the ’90s that the term was also embraced by the Dutch and not only included the successes of our consensus-economy but also the way we took care of our problems with drugs, the environment and sex education.

Our polder model even became a popular economic model in France, Germany, the UK and the USA where they were all looking for a so-called Third Way for their economy: capitalism with a social face. In their eyes, the polder model was the key to achieve that, but there was actually no clear explanation for what they saw as the ‘Dutch Miracle’ of the ‘90s and the most important institutions that took part in the polder model were already invented shortly after the war: de Stichting van de Arbeid and the Sociaal Economische Raad. 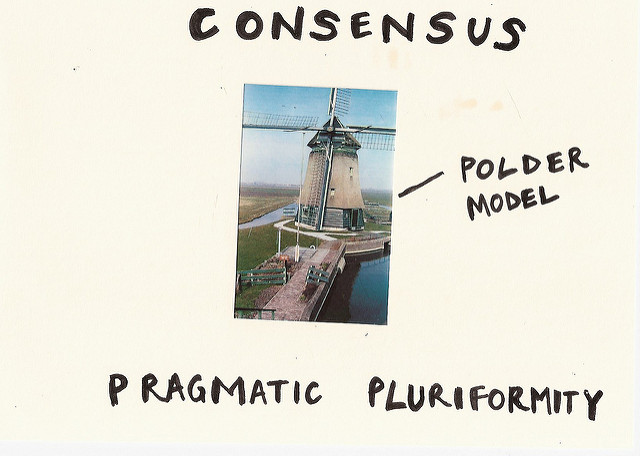 Illustration of the Dutch poldermodel

Although the term suggests that there was a polder model in our early modern country, because we had to keep our feet dry, the reality was a whole different story. In most of the polders and water boards there was actually no harmony, no consensus nor meetings on an equal footing. The only way  they worked together was that the polders came into being, due to the contribution of joint capital and united cooperation. However, the decisions were mainly taken one-sided by members of the board with an aristocratic background. The early modern world was a class society in which people from the higher classes had little interest in what the farmers wanted or to give them any kind of vote in this. The notables made all the decisions, they dominated the water boards, their word was law and there were barely any exceptions to this rule.

Tolerance is something that the Dutch talk about all the time. Politicians often see it as one of the moral highlights of Dutch society. They try to sell this moral concept abroad and tell us that the Dutch tolerance is under pressure because of the refugees, from muslim countries, that ‘flood’ our country. After all, we are the land of Spinoza and other free-thinking intellectuals that were persecuted elsewhere. We are the land where soft-drugs can freely be used and where the sexual preference of someone is a non-issue. On the other hand, we were also one of the last European countries where the abolition of slavery took place, where there was a pillar society initiated in the late 1800s, in which one confessional pillar preferably had as less possible to do with another pillar and where so-called ‘inspraakavonden’ about incoming asylum seekers can turn into riots against the police and death threats against local politicians.

Dutch tolerance is mainly traced back to the Dutch Golden Age, 17th century, when the Netherlands were still a Republic. The main supporters of religious tolerance were actually the conservatives. They were caught between the Catholic king Philips II and his supporters and the radical Calvinists. These two groups fought for the implementation of their own radical reform program. In between there were the moderate protestant rulers who eventually drew the longer straw. But that didn’t mean that they implemented a religious program that we, in the 21th century ,would have considered tolerant. There were several restrictions to the freedom of religion and there was also discrimination, mixed marriages were rare and Spinoza confessed that he was afraid to publish several of his articles, because of possible repercussions, but overall there was relative peace in which our economic, cultural and colonial expansion would prosper as never before.

Tolerance by the way, isn’t even a positive term when it means that you ‘allow someone to be different, even though your actually against it’. That seems pretty passive aggressive to me, so why the hell do we even want it to be a corner stone of the Dutch identity. Get rid of it. Erase it from our collective memory. NOW PLEASE.

The image of our trading spirit has its roots in the Golden Age of Dutch history, the 17th century. Our East India Company (VOC) and West India Company (WIC) were world famous for dominating the world market in certain Asian spices and the temporary monopoly on the slave trade in the West Indies, the so-called asiento. In addition, it was the Calvinist spirit that made us even more rich than we were already. Because the ethos of Calvinism was that you shouldn’t be to showy with your luxuries, doe maar normaal dan doe je al gek genoeg, they invested their profits back into companies such as the VOC and the WIC which made them even richer.

Although the history of the VOC and the WIC contributed heavily to the image of our trading spirit, we weren’t actually getting really rich from this international trade. Most of the wealth we generated was mainly earned with the inter-European trade, rather than with the extra-European. However, the VOC and WIC were pioneers in the way the enterprises were financed, via public enrolment by stakeholders. Therefore you could call them the first joint-stock companies (N.V. in Dutch) we ever had, although they had privileges, such as the monopoly on warfare in the Indies, that few N.V.’s in the Netherlands have nowadays.

Calvinism and capitalism according to Max Weber

With a little bit historical knowledge it’s easy to see that most corner stones of the Dutch identity are less true than most politicians try to hold out for us. The abuses that can lead to I have mentioned earlier. Let’s hope we won’t get a lot more of such abuses in the future, which can only be achieved if history stays an important corner stone in the curricula on Dutch primary and high schools.