Dirkjan: Definitely the funniest comic in the Netherlands

The funniest comic in the Netherlands?

The closest Dirkjan ever got to having sex was when he was abducted by space amazones. But unfortunately for him, his stupid assistant, unaware of events, who mistakenly thought that Dirkjan was in danger, beamed him back to their space ship saying: “that was just in the nick of time, captain.”

This is typical of what the character Dirkjan entails. He is a dorky, somewhat stupid man, an eternal student type, but a very likeable comic character created by Dutch cartoonist Mark Retera. And is renowned for not having sex although he frequently encounters beautiful girls. Retera was famously interviewed by Dirkjan in an article for De Nijmeegse Stadskrant where Dirkjan complained that he doesn’t have a girlfriend. To which Retera replied to Dirkjan: “Sex and Dirkjan just don’t match, moreover you don’t have time for one, because you have to study. Oh but you’re not a student any more…” 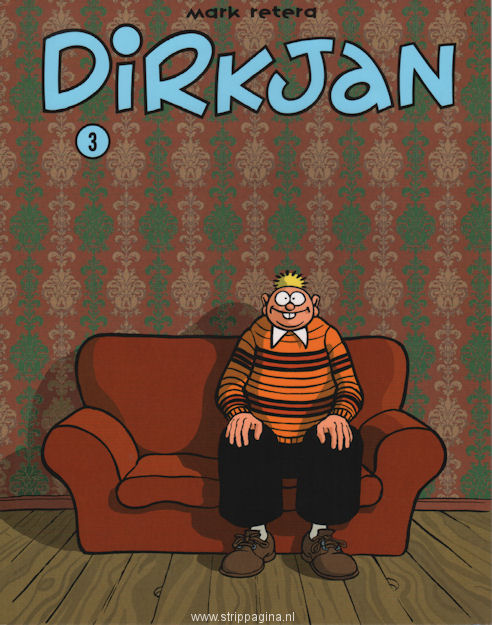 Mark Retera (Eindhoven, 1964), who lives and works in Nijmegen, started drawing cartoons during his time studying cognition science at Nijmegen’s Radboud University. At the same time he provided his first cartoons of Dirkjan to student magazines ANS, het Algemeen Nijmeegse Studentenblad and Iris. Eventually the comic became so successful that Retera started to work full time on Dirkjan instead of actually doing something useful with his education as a cognition scientist. Although the psychology part of it could, if you think of it, be probably of some use to him trying to explain Dirkjan’s weird take on the world.

Dirkjan is faced with everyday problems. He encounters women, pizza deliverers and gnomes on a regular basis. But most of all he tries to deal with himself and his awkwardness in every possible situation. Always the eternal optimist, he tries to engage with women, but is always turned down by them. Even the simplest of jobs prove to be a giant hurdle for Dirkjan. Life for him is just an endless litany of trying hard, but not achieving anything. Pretty shitty for him, but golden material if you are a cartoonist. You feel like if Dirkjan were to succeed in anything, it would probably be the end of him as a cartoon character. As Retera fully admits: “Dirkjan has to fail, it is how I have drawn him all this time. Success for him would mean the end of success for me!”

And successful the comic has been. Published in all the major Dutch newspapers, Dirkjan has become a bit of a Dutch icon. Dirkjan T-shirts, Dirkjan calender’s, Dirkjan mugs, Dirkjan underwear and of course all the comic books, the Dirkjan shop is expanding all the time. Since 1996 Retera has released 23 Dirkjan comic books selling in total close to one million copies.

Retera will be the first to admit that he was inspired by comedy from the United Kingdom and the United States. The likes of Monty Python and American Gary Larsons (The Far Side) are amongst his favourite comedians. When you see Dirkjan as a waiter reply to a customer who, whilst looking at his starter dish, says: “I did not order mushrooms” with “that is a basket with pieces of baguette” you know that could have been a Monty Python sketch. As could have been the cartoon in which ice cream seller Dirkjan offers a variety of ice cream to Superman who throws up right after his first lick and it turns out that Dirkjan sells vanilla, strawberry and (Superman’s only weak spot) cryptonite mocha. You kinda think, that can only happen in the absurd world in which Dirkjan seems to live.

As Monty Python and Pythonesque have become iconic words in British comedy representing what absurd and alternative comedy entails, Dirkjanniaans has all the makings of becoming the Dutch equivalent. There is no two ways around it: Dirkjan rules! This is why it’s definitely the funniest comic in the Netherlands.

The funniest comic in the Netherlands also has a video too.

Are you a fan of Dirkjan? Do you agree that’s it’s the funniest comic in the Netherlands? Let us know in the comments! And don’t forget to join our Facebook group for more Dutch stuff!

Previous articleA sunny Saturday and Mother’s day: what to do?
Next articleInternational student deduction: Universities call for cap on courses taught in English