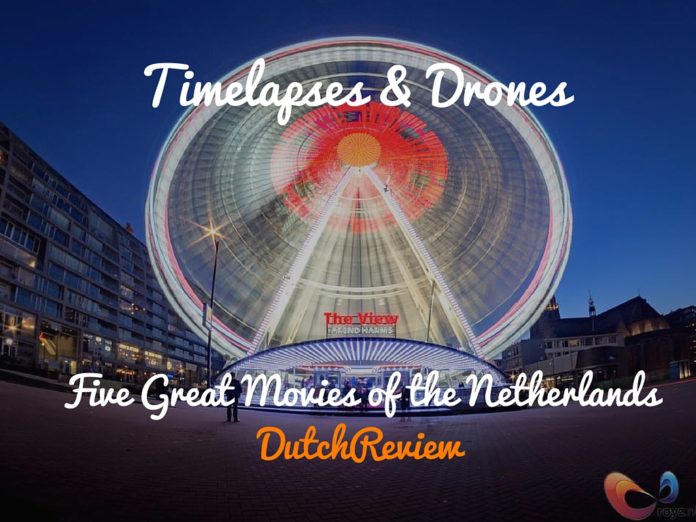 Is there anything better than some stunning cinematography? Yes — when it’s of the Netherlands! We’ve hunted and gathered five of the best-looking films with footage of Holland that will make you say mooi!

So it’s only right that these gorgeous shots of the Netherlands get a topic of their own. Here we go!

Scheveningen is almost impossible to pronounce as a non-Dutch speaker and trying to might result in serious tongue-injuries. The beach town right next to The Hague does make for an awesome movie (by SVID).

The skyline, sunsets and the Kuip. It’s all there, Rotterdam is such a great city for such a movie (made by Tim van Vuuren)  that we had to include another one. A testimony to Rotterdam’s ever-evolving landscape, here’s a timelapse (by Timo Bongers) of the Ferris wheel right next to the Markthal:

You knew the town of Leiden was gonna make the cut in this article if you are a frequent visitor of DutchReview. The most picturesque town of the Netherlands shines once again in this production by Arne Wossink.

The Dom in Utrecht

If I recall correctly the maker of this movie got fined by the municipality of Utrecht for making this beautiful drone movie of the Dom Tower in Utrecht. Bizarre of course! Should have received a medal for the free city marketing he was doing.

Couldn’t really leave our capital out of the article right? Great movie by Jonas Hofmann.

What did you think of these incredible movies? Make you want to visit? Which cities and towns should we feature next time? Let us know in the comments below!

Feature Image: DutchReview/Supplied
Editor’s Note: This article was originally published in March 2016, and was fully updated in December 2020 for your reading pleasure.