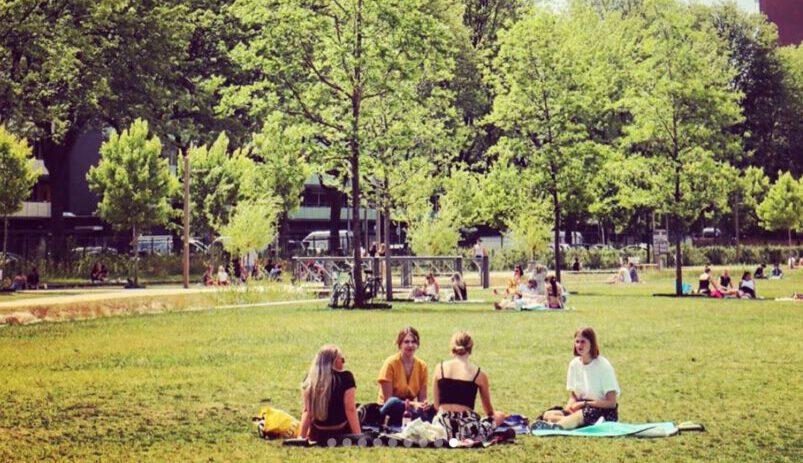 Many of us are staying at home this year, and forgoing a holiday abroad. But that doesn’t mean we can’t have a vacation! Tilburg has set itself up to be the Vacation City of the Netherlands this year, and boy, have they done a good job.

From an urban beach to a shopping and drinking, Tilburg has created awesome holiday vibes this year. We’re going to run you through our six favourite holiday spots in Tilburg this year in this article. But if you need more, then head over to Ticket to Tilburg: they have all the tips you could ever need about the hotspots and hidden gems of one of the coolest cities in the Netherlands.

Tilburg has really thrown itself into making the city into the best vacation city of the Netherlands. They have created a series of 12 postcards which you can collect at 12 different locations around Tilburg for free! Not only do you get some really cool souvenirs and some extra-holiday vibes, but you’ll also be making sure you see some of the best spots in the vacation city of the Netherlands this year.

In case you’re unfamiliar with Tilburg (how dare you), the lovely folks at Ticket to Tilburg have also created a special map for you to use to explore the city, which you can find here. This also has the 12 hotspots marked on it, along with some useful information about each spot.

Now then, without further ado, let’s jump right into our top six things you can check out in Tilburg while you’re holidaying there- whether you’re popping by for a day trip, or spending a few weeks there.

Pull up to the drive-in cinema

We all know that summer in the Netherlands doesn’t necessarily mean good weather, so it’s always a good idea to have activities planned that aren’t sun-reliant. That’s exactly what Tilburg’s Drive-In Cinema is perfect for. Drive-in cinemas are usually a predominantly American affair, but Tilburg is bringing it to the Netherlands and giving it a unique twist to boot. There will be live performances to accompany some of the films, and you’ll also be able to order snacks to your car simply by turning your hazard lights on. You can check out the full programme here (but hurry, it’s ending soon!).

What better spot is there  to have a holiday than an urban beach? Not only do you have an open air cinema, beach yoga, and a campfire to enjoy, you also have the bustling city of Tilburg literally right outside the beach. It’s the perfect balance of a city stay and a beach vaycay. Beachy will be open every day from 12:00 to 00:00, and most importantly for the Dutch among us, entrance is completely free. The exact address is Goirke Kanaaldijk 44, and there’s plenty of parking available if you don’t want to bike there. The urban beach is set to remain for at least the next three years.

If you’re more of a park person, check out the spoorpark in Tilburg for your fix:

Have a nature-filled holiday in Tilburg

In our opinion, no holiday is complete without a bit of nature, and Tilburg is the perfect spot to go to for some greenery as well. From the beautiful Wandelbos to the enchanting Heidelpark, there are so many options. Our personal favourite in the summer months, though, is taking a trip to the Koningshoeven Abbey and getting a beer there. The abbey makes La Trappe beer, and on a summer’s day, there’s nothing quite like sipping a cool beer in the beautiful abbey grounds. You can also check out some great walking and biking routes around the city if you fancy a more active holiday.

Check out the urban scene in Tilburg

When you’re visiting a city for a holiday, one thing you absolutely have to do is get a feel for the character of the place. There’s really no better way of doing this than checking out its urban scene. In Tilburg, you’ve got the added advantage of being able to take an e-step around the city- in most of the Netherlands, these are illegal. Stepping around the city makes it really easy to explore, and to check out all the different hotspots for street art and  cool shops and bars.

Explore the museums of Tilburg

Another rainy-day holiday activity is going to a museum, and in Tilburg, you’ll have your pick! You can go to De Point for contemporary art, the Natuurmuseum for natural history, and the Textielmuseum to learn about Tilburg’s textile industry. They’re all quite easy to walk between, even if you haven’t acquired an e-step for yourself. Plus, there’s enough museum variety in Tilburg to find something for everyone, from dinosaur-obsessed kids to the art critic in the family.

Perhaps you didn’t care for any of the previous entries and just want to go for a nice bikeride or do some shopping and drinking (who doesn’t?). Well, good news, both Tilburg and DutchReview have you covered. Here’s our article on walking and cycling through and around Tilburg (leave us some tips in the comments if you have any!).

Tilburg is also an excellent city for shopping and exploring the cultural and culinary scene of the Netherlands’ sixth city. We did all that and you can find all that goodness in our guide on shopping, eating and drinking in Tilburg.

Will you be heading to Tilburg for your holidays this summer? Let us know in the comments below.