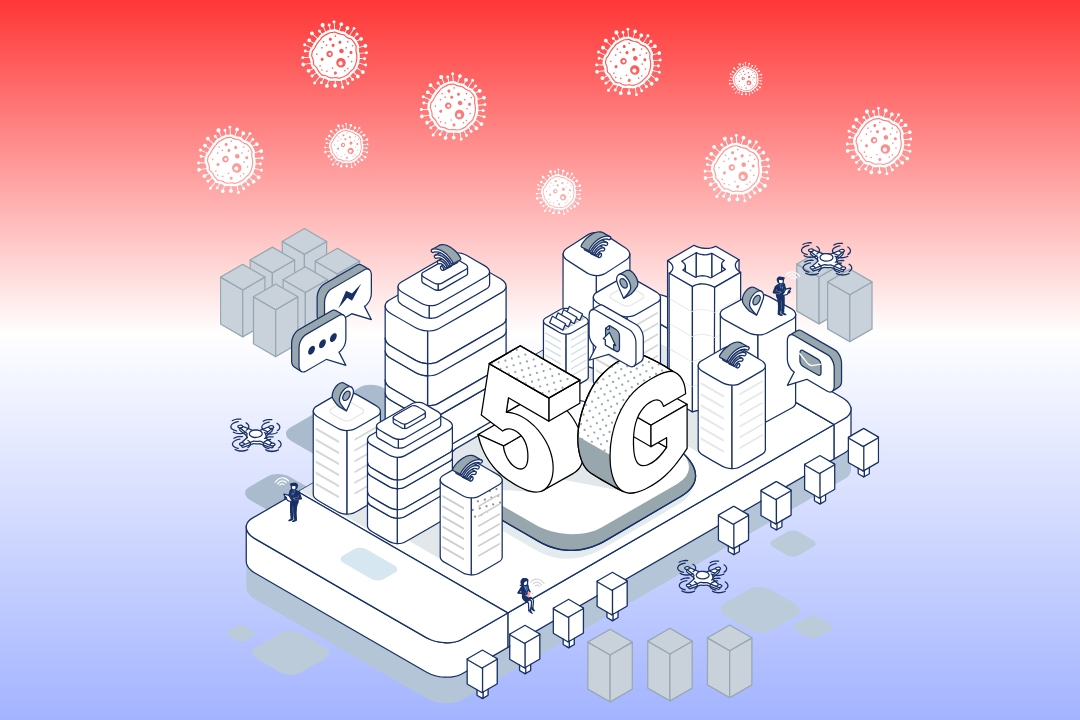 When the bubonic plague spread through Asia and Europe in the 1340s, theories that Jewish communities were to blame for the epidemic lead to mass arrests and executions. The majority of conspiracy theories function as scapegoats: simple explanations for complex, random, or inexplicable events.

So it’s no wonder that this kind of theorising has taken hold over the last few months of global lockdown: as minds wander, fear and anxiety creep in, and we yearn for clarity. That said, if you do find solace in the thought that Bill Gates has engineered the virus to depopulate the Earth, you should probably try another less ridiculous way to pass the time instead. What about baking some banana bread?

A conspiracy theory that has taken particular hold during the COVID-19 pandemic associates the virus with the installation of the 5G network. This theory has lead to real damage in the form of vandalism and arson attacks on network towers in the Netherlands and the UK.

Ethereal narratives associating radio waves with damage to the human immune system have existed since the construction of radio towers in the 1980s and 90s. This particular theory originated in the Dutch-speaking world: a since-deleted article in the Belgian newspaper Het Laatste Nieuws in January first implied a link between the two.

In Europe, they’re burning witches again — 5G telephone towers are being set on fire. At least 16 masts in the Netherlands have gone up in flames, attacks on 5G equipment in Italy, Ireland, Belgium, and Cyprus, more than 60 such acts of arson in UK https://t.co/e0oxzXmVCS

The 5G theory has since been legitimised by “experts,” such as discredited British ex-physician Andrew Wakefield, pushed by Instagram influencers and celebrities, and picked up by social media algorithms designed to identify viral trends (regardless of their content).

The New York Times reported that 5G conspiracy theories have been spread by Russian television station RT — yes, the one involved in the strategic spread of disinformation in the 2016 US presidential election — since 2019, reportedly as a means to slow the spread of technology in the West.

Recent protests in both the Hague and Utrecht promoted a range of conspiracy theories which connected 5G to coronavirus and included anti-vaccination and anti-censorship views. These appear to be part of a wider social phenomenon of scepticism. Dutch demonstrations against 5G are not entirely new, but the current crisis has certainly endowed the protests with heightened mainstream attention.

Indeed, anti-5G activists have now forced de Gezondheidsraad, the Health Council of the Netherlands, to produce a report on the safety of 5G, the results of which are reportedly due to be published in July.

The demonstrations across the Netherlands highlight the common denominator of all conspiracy theories: they rely on the paranoid principle that everything is connected, and nothing is what it seems. Arguably, the theories themselves are in some way irrelevant, and are merely a means by which to express an underlying cynicism and anti-establishment worldview.

Rather than spending this article debunking the nonsensical 5G theory (find evidence of its irrelevance here), I’d like to explore what it is that has catapulted fringe viewpoints into the mainstream, and what the theory shows us about the condition of present society. Why has the COVID-19 lockdown created such fertile ground for conspiracy theories to fester? What factors have contributed to the virality of misinformation, and how can we attempt to combat the negation of facts, evidence and expertise?

The murky waters of a ‘post-truth’ society

The rise in misinformation is a determining trait of what has been coined as the ‘post-truth’ era. Post-truth society is characterised as one in which experts are dismissed, falsehoods are presented as alternative facts, and facts or “truths” have little meaning. The rise in populism in recent years can perhaps be associated with the rise in “fake news” and the synthetically generated “deepfakes” which uncannily complicate distinguishing fact from fiction.

The lack of expert voices throughout the politicised handling of the pandemic, combined with an underlying distrust of authority has contributed to the rise in misinformation and widespread doubt. Ironically, during the campaign for Britain to leave the EU in 2016 — a path vehemently discouraged by many experts — one of the leaders of the Vote Leave campaign Michael Gove famously declared that “people in this country have had enough of experts.” The prevalence of conspiracy theories throughout the COVID-19 pandemic has emphasised how rapidly misinformation can spread in a post-truth climate. When trust is eroded, it is far easier to cast doubt on events and information being presented as fact.

The conflation of science and politics throughout the pandemic has also lead to confusion between government policymaking, and scientific fact. Although Trump’s comments unanimously united both scientists and politicians in the agreement that people shouldn’t be injecting themselves with disinfectant, uncertainty has characterised even the science surrounding the COVID-19 virus.

However, science is governed by immutable laws, and scientific research is subject to scrutiny in the form of peer review. There has to be openness about how knowledge is gained. Throughout the pandemic, false and misleading claims that science leads policy change only contributes to an environment in which science, facts, and transparency are believed to be suspicious, untrustworthy, conspiratorial.

Sir David King, the former chief scientific advisor in the UK, expressed concerns that government ministers are “setting the scientists up to be the fall guys”, after continual claims that the British policy is simply following the science. Perhaps another factor to which we can attribute conspiracy theorising is a modern tendency towards soundbite, simplistic information: “misinformation comes into the world fully formed…real information is slow.” Almost tragically, The 5G theory reinforces this desire for simplicity, as it reassures its believers that if the masts are destroyed, so is the virus.

Former Chief Scientific Advisor, Sir David King says he is "worried" that ministers are "setting the scientists up to be the fall guys" after he joins other experts to form 'independent SAGE'.#KayBurley

Time to step up, Zuckerberg

Social media does indeed provide misinformation with a platform and much greater reach than a conspiracy theory would have had in the past. This, of course, doesn’t mean that everyone who comes across conspiratorial material will go on to believe it. But social media channels — YouTube, Facebook and Twitter in particular — undoubtedly have a responsibility to identify and remove harmful misinformation. A senior researcher at Demos Josh Smith noted: “the dangerous messaging around 5G highlights the urgent need for a process for identifying and removing harmful misinformation, driven by those who are experts in relevant fields, but also with public knowledge and consent.”

The self-prescribed role of the conspiracy theorist centres around collecting evidence and pointing to things that don’t appear to make sense, often seeing themselves as the true critical thinkers compared to the rest of us sheep. The polarisation heightened by the echo chambers and targeted content of social media feeds shores up “confirmation bias,” the typical human tendency to interpret new evidence as confirmation of one’s own preexisting beliefs. As the hotspot for passive-aggressive comment threads, social media often has the tendency to reaffirm difference in opinion, instead of initiating meaningful debate.

So whether it’s the post-truth climate, the lack of and lack of interest in expert voices, the confusing conflation of science and politics, or the polarising and irresponsible social media channels, the rise of the 5G conspiracy throughout the COVID-19 pandemic highlights some concerning elements of a modern post-truth society. Critical thinking and critical engagement are key, as are meaningful conversations with those who oppose your own views.

However, being endlessly rebuked by the classic retort, “well you would say that wouldn’t you” can get pretty tiresome. For this reason, it is crucial that tools and systems driven by experts, and held accountable by the public, are made available to the public: especially in times of crisis such as these.

Have you encountered a conspiracy theory during the COVID-19 pandemic? Tell us your thoughts in the comments below.