The Smartphone-Cycling ban in the Netherlands is starting Monday (and yes, you will get a fine) 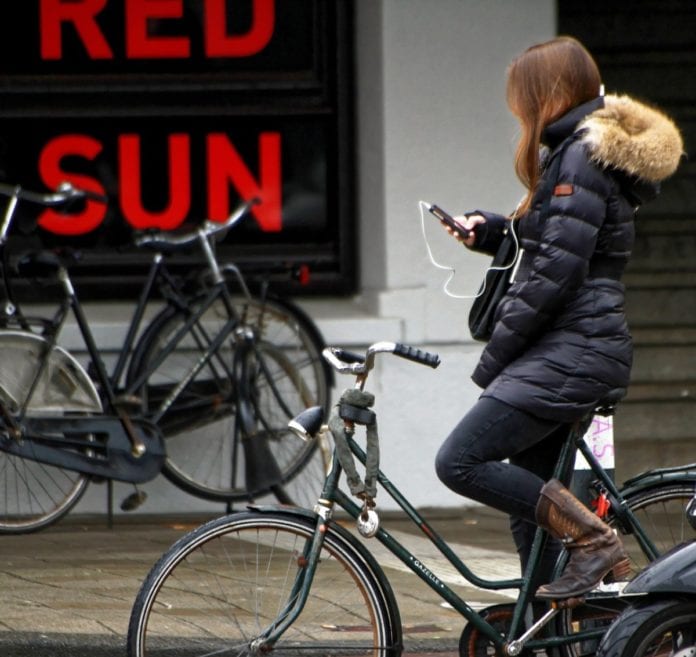 We knew it was coming, and tomorrow on the 1st of July it’s actually here: The smartphone-cycling-ban (for lack of a better English phrase) is here and it will, how un-Dutch, actually be enforced as well.

Anyone cycling from this Monday with his or her phone in hand can receive a fine of 95 euros. This new piece of legislation had already been announced several times and Minister Van Nieuwenhuizen has now started a campaign to draw extra attention to the ban which will kick in at the 1st of July 2019.

It was already forbidden to app and call for motorists and many other road users and now cyclists will be added on the 1st of July.

Van Nieuwenhuizen emphasizes that all road users, including cyclists, must keep their attention on the road and not on the screen of their telephone (you’re reading this right now on your phone aren’t you?). The slogan behind the campaign is: “Let your phone sit comfortably and keep 95 euros in your pocket.”

No phone in hand here, all safe:

This bans all mobile electronic devices while on a bicycle

The police have announced that a fine will be issued immediately starting this Monday, so no ‘gedoogbeleid’ here. The prohibition only applies if the bicycle is moving. For example, someone who is standing still in front of a traffic light can hold the phone. The rules refer to a “mobile electronic device”, so tablets, music players and cameras are also prohibited. The latter also applies to other road users from 1 July: from Monday onwards, motorists may not only not hold a telephone in their hand, but also no other devices.

If the mobile device is in a holder, it can be used again, so I guess we’re just going to buy one of those in order to keep on spotifying and google-mapping?

Let us know how things are going on the bicycle paths in the coming days will ya?

Previous articleWhy Tilburg might be the next economic hotspot of the Netherlands
Next articleStarting life as a student in the Netherlands: 7 things you need (to know)

Plans for a new OV chip card have been cooking for a while now — but the project has been...